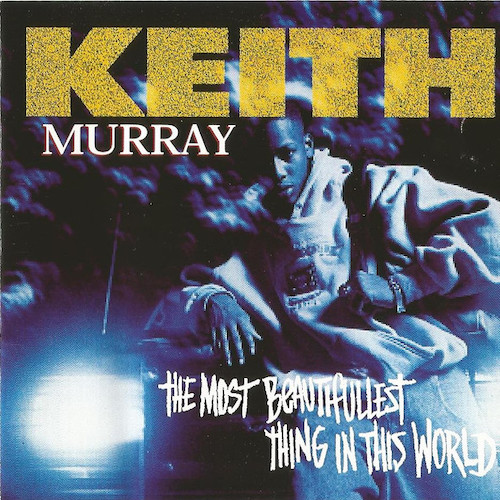 The Most Beautifullest Thing in This World

Keith Murray :: The Most Beautifullest Thing in This World

“I +comes cleaner+ than Jeru, and damage an amateur.”

My anticipation for Keith Murray’s solo album came from Erick Sermon’s “No Pressure” album in 1993, E Double’s first solo project following the dissolution (and well before the reunion) of EPMD. Murray only had one verse to catch wreck on Sermon’s “Hostile,” but he made an instant impression when he opined “The most beautifullest thing in this world/is my notion, for murderous poetry in motion.” It was a simultaneously absurd and beautiful expression of microphone dominance. Murray invented a word that didn’t exist, but used it so effortlessly and naturally that it immediately entered the rap lexicon. It was hardly surprising that his debut a year later was titled “The Most Beautifullest Thing in This World” as a result. Anything else would have been disappointing.

What is disappointing is that only two singles were released off this album — the title track and the weed smoking anthem “Get Lifted.” It’s certainly not due to a lack of success in the marketplace, because the album was certified gold (500,000 sold) a year after its release. It’s certainly not the production, because every single song save one was produced or co-produced by Erick Sermon. That one? Oh you know, some dude named Reggie Noble took care of it. It’s no coincidence that both he and Sermon dropped guest verses on “How’s That.” This was a Def Squad family project through and through.

And if you had any doubt of that, Miss “Yo yo Redman man what the fuck man” Hurricane G appears on “Bom Bom Zee” along with Paul Hightower.

Although it’s one of the shortest tracks on the album it also has some of Murray’s best bars, including “Pissed ain’t the word so observe/how I break your flow down to a science and kick it to the curb.” That’s such a beautiful (pun intended) dismissal of whack emcees it should be printed on a plaque and placed in a Hall of Fame somewhere. Oh and that track Redman produced? It might actually be the best musical contribution to the whole album, and considering we’re comparing to the incomparable E Double that’s quite the accomplishment. “Escapism” is some funky ass shit though and Murray lives up to it by taking us on an intergalactic journey.

For me the only problem with “The Most Beautifullest Thing in This World” is that Keith Murray and his Def Squadron set such a high standard for him right out of the gate that he’d never be able to duplicate it. They tried over and over again and the results ranged from “above average” to “almost four mics” seems to be where he peaked. The truth is though that his second best album was his second album, and Murray has been chasing that lightning in a bottle they captured in ’93 to release in 1994 ever since.

Keith Murray :: The Most Beautifullest Thing in This World
8.5Overall Score
Music8.5
Lyrics8.5