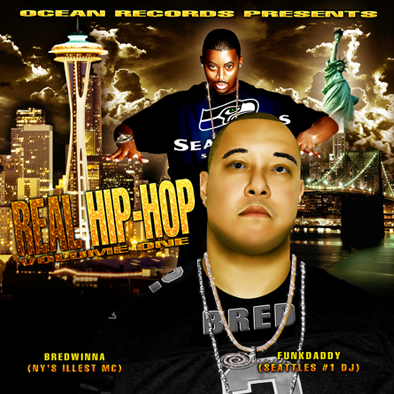 This bi-coastal mix-CD brings together Seattle veteran DJ Funkdaddy and NY rapper Bredwinna. At over 30, the Washington Heights representative is a bit older than your average newcomer. Earlier this year, he won a contest held by Babygrande Records and www.undergroundhiphop.com looking for ‘The Next Street Champ’ on the occasion of Big Shug’s “Street Champ” release. Back in October of 1999, he made The Source’s Unsigned Hype column as part of the group jAM cOMPANee. Now he presents himself as a solo artist with a mix-CD whose artwork doesn’t distinguish it at all from the current crop, but whose content differs considerably.

“Y’all can be Goliath – if I’m David,” Bredwinna quips over a Bad Boy beat on “Lost All Ya Papes,” cleverly alluding to his faith. However, aiming to “make heads bob, whether dorag or turban,” “Real Hip-Hop Vol. 1” is far from a crusade for Christian values. But he does attempt to carve out a niche for himself in a market that tells nice guys that they finish last. “In rap I’m persona non grata,” he shrugs, putting himself apart from the pack with lines like “I’m too brave to pack a pistol, so be ready to shoot joints.” Sounds like a potential street champ alright. In terms of being forthright about his personal life, Bredwinna believes in honesty, arguing on “Put it on Paper”:

“My background’s not rosey
lifestyle wasn’t always cosy
my neighbors either too high or nosy
(…)
Yes, I graduated with a lotta science classes
And it’s true that when Bredwinna drive he wear glasses
Wasn’t born to be cute
but watch it, cause I might come down to the rap station in a three piece suit
(…)
The streets couldn’t hold Bred
so more than three decades later your boy moved to the suburbs instead
And it’s true you won’t find me on the corner
but it’s not because I can’t, it’s cause I don’t wanna”

You will catch Bredwinna repeatedly taking a stance against commercial rap, but he doesn’t dwell on the subject extensively. It’s when he stresses his alleged superiority that he loses touch with reality. Bragging and boasting is an art that rap has perfected, and lofty claims like “I say the hottest lines anybody ever said,” “Ain’t no rapper alive can see these verses,” “There’s more punchlines than anybody ever heard,” or “You’re dealin’ with the top of the lyrical hierarchy” remain far-fetched if the attempts to back them up look weak in comparison.

In terms of precision and intensity, Bredwinna’s contest-winning performance over Big Shug’s “Legbreakers” stands head and shoulders above most of the verses on this CD. Overall, however, lyrically and rhetorically “Real Hip-Hop Vol. 1” is a notch above your typical mix- CD. He’s as dependent of good beats as anyone else, the showcase picking up steam with “Blood, Sweat & Tearz Pt. 2,” an adaption of The Game’s “Let’s Ride” with expert scratching contributed by Funkdaddy. With the right production, there’s a possibility for Bredwinna to score a club hit, which is more than what you can say about many others who don’t agree about the way hip-hop is going. “Ooh Aah,” backed by classic “Heartbeat” drums, is a step in the right direction, as Bred presents himself as an entertaining, likeable man of the people, a master of ceremony in the old school sense of the word. With his slight Busta Rhymes-like twang, he flows comfortably over the fat production of “Hip-Hop Is Back,” a comfortability that is reflected in Bred’s assured affirmation that “hip-hop is alive and well.” Later on, he adds:

“Open the light post, hip-hop’s resurrected
No longer will the art be disrespected
You ask how the real skills survived
I took it back to the streets from which it was derived
I kept it on the block, added some intellect
raised the raps to a level y’all did not expect”

Listening to “Real Hip-Hop Vol. 1” makes you realize the challenge that lies in recording a CD without giving in to the negative stereotypes associated with rap music. Many of today’s MC’s manage to steer clear of profanity and street life glorification, but for some reason it’s become much harder than back in the days when even saying nothing could mean saying something. Bredwinna himself passes a harsh verdict on the contemporary scene:

“Record labels don’t complain
Only the one who’s buyin’ records is goin’ insane
Like, whose CD should I purchase?
When out of all of these rappers not one got a purpose?
State of hip-hop bring tears to your eyes
Real dumb music from a bunch of wise guys”

On “Real Hip-Hop Vol. 1,” we catch Bredwinna in the process of promoting an upcoming album. Hopefully, it’s that album that diverts his attention from this mix-CD. Seeing past the disc’s obvious flaws and its star’s superiority complex, we witness a talented rapper. Should he be able to muster the penmanship associated with past greats or just the lyrical creativity usually associated with non- commercial rap, Bredwinna might just have a future in rap music.