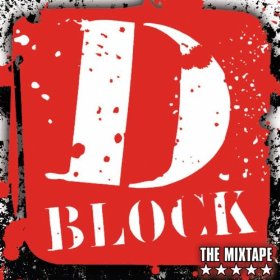 The following equation is not in any chemistry book, but does add up: The Lox (Styles P + Jadakiss + Sheek Louch) + J-Hood*= D-Block. J.Lo’s jewels, Puffy Combs’ Benjamins and Mariah Carey’s ehm legs made The LOX a household name to the streets, suburbs, and gated communities. Under the new record label D-Block, with a brand new member straight out of the wrapper, the three Yonkers musketeers just got a new swordsman and a new name to defend their city honour.

Is J-Hood D-Block’s D’Artagnan? It is the most important question when looking at the track list of this “D-Block presents: The CD/DVD Mixtape.” The ´fourth LOX,´ as he calls himself, gets his shine on six of the nine songs on the album, and even goes solo on three of these. It is debatable whether this is due to the promotion of a new star, or the original LOX members had something more important to do than appearing on this album.

When you look at the background of the founding fathers of D-Block Records, it is not very surprising that Sheek, Styles, and Kiss let the younger J-Hood have the front stage on this mixtape. Styles P (appears on 3 songs) is an upcoming MC with the successful debut “A Gangster And A Gentleman.” Sheek Louch (appears on 4 songs) is the enigmatic LOX orchestrator that dealt with every ‘rec exec’ from Universal to Roc-A-Fella. Jadakiss (appears on 1 lousy song on this mixtape) is a heavyweight street fat cat with successful solo albums and countless cameos all over the place.

All J-Hood has is his mouth and D-Block word-of-mouth. According to the other three, he is a successful underground star that is going to represent Yonkers to the fullest with his upcoming debut “Tales From the Hood.” At least, that is what they tell the viewer on the DVD that comes packed with the mixtape. Sheek Louch provides for an energetic group biography while walking through the neighborhood he grew up in, interlaced with short intermissions by Jadakiss and Styles P. Sheek’s honest introduction to his friends and family is a sight for sore eyes, especially because of the Yonkers Nicknamelodeon with Supa Mario, Gravy, and Popeye. Two hours is way too much material though, considering Mahatma Gandhi got the same amount of time for his biography.

Even with all The LOX’ praise, J-Hood’s vocals on the D-Block tape do not convince me he can build up the same career as his senior counterparts. On the short track “Young G,” J-Hood drops lines that come closest to a proper introduction:

“It’s called easy to break in, like a Honda Accord
When “Tales From the Hood” drops I better get an award
I’m letting it to be known
Nigga, I ain’t talking for nothing
Nigga, my shooters like bubbles
How they come out busting”

Hood’s punchlines are above average, but nothing more than that. His slow voice has a menacing bass in it, but just enough to be convincing. If you compare J-Hood’s solo “Nobody” to Sheek Louch’s well-meant G-Unit threat “Kill Ya Self,” it becomes very apparent that J-Hood still has a long way to go to become a true Yonkers musketeer. Sheek’s hook on this song, impersonating 50 Cent, says it all:

That sounds just about as painful as a real bullet wound, and Sheek is far from done:

“Why can’t you come around where you hung as a kid?
You turned soft on niggas since you got on top
I know Queens can’t be proud of “Candy Shop”
Look, you ain’t got to make that trash no more
You rich; so everything’s gonna move out the store
So the next time I hear you, if it ain’t that raw
I’m gonna tell the hood to close the door
Last chance, 50!”

Rhymes like these make me wonder why the original LOX elite is so ill represented on this mixtape. Every track they appear on gets elevated by their mere mic presence, like the triumphant opening track “D.B.L.O.C.K,” and the Clinton Sparks-produced “Everything Ya Got.” Sparks came up with the brilliant idea to use the ‘Cheers’ theme song for a beat, and even that awkward decision didn’t deflate the song’s entertainment value. Let’s hope next time D-Block comes in full force, with J-Hood in his rightful place in the background, and the seven dwarfs tucked away safely in the prop suitcase.