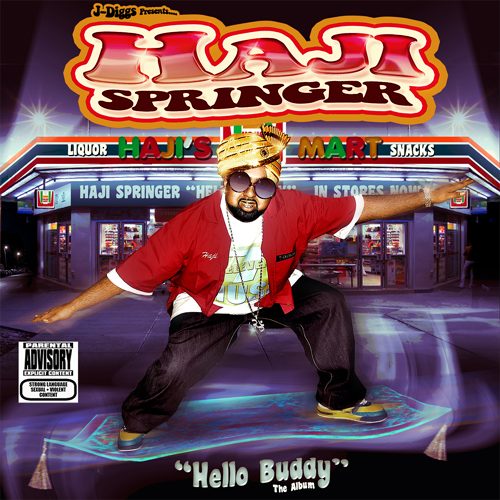 I hate stereotypes. For that reason I can’t stand rapper Chingo Bling and the act he puts on. I would have no problem if Chingo Bling was genuine, but Chingo Bling is in reality a college-educated man who fakes a heavy Mexican accent and tries to use the gimmick to sell records. It doesn’t work as his latest album sold a whopping 7,000 copies the first week out. As much as I hate stereotypes I find that I’m much more critical of stereotypes that hit close to home. I was not offended in the least when Haji Springer released his debut album. I should have been offended as Haji Springer is to Indians what Chingo Bling is to Mexicans. Pictured on the front with a turban, Haji is riding his magic carpet in front of his 7-11 styled convenience store. On the back cover, Haji is proudly ghost riding his taxi cab, a slick yellow Dodge Charger. Haji Springer also fakes his accent as one can tell on the bonus DVD and certain songs that naturally he doesn’t have such a heavy Indian accent. So I would like to apologize to all our Indian readers for even buying this CD, I was bamboozled by the crazy cover and lack of quality Bay Area rap.

Haji Springer wouldn’t be all that bad if he could actually rap, but his appeal starts and ends with the fact he is the only Indian rapper in the game. On the intro he wants to welcome you to his album, buddy. Hello Buddy. Buddy. Buddy. Buddy. Haji likes to say “buddy” a lot, I assume because he thinks Indian people who haven’t quite commanded the english language at the very least learn and use the word “buddy.” After the intro track he follows up with the title track, “Hello Buddy.” This track actually wouldn’t be bad for a hyphy track as Keak Da Sneak and San Quinn lend vocals. Unfortunately, they were joined by Haji and his horrible lyrics:

“Hello everybody, tonight I’ma go party
Drink a lot of liquor and put a thizz in my body
I’m a act an ass wherever I go
You better cuff your girl before I tell her where to go
Throw your hands up in the air, lift up your middle finger
Keak Da Sneak and Haji the greatest rap singers
Throw your hands up in the sky, Thizz is what it is
You don’t want no problems because I can give you the biz
Mister Mister Haji, yes so many people like me
Like my boy Kunta Kinte, I’m super duper hyphy
In my super duper car with my big booder wifey
Police behind me, I think they are stereotyping”

REALLY, HAJI? The police are the ones stereotyping? Last time I checked Indians driving around cabs aren’t high on the profiling list and if anyone is stereotyping it is Mr. Springer who runs through 3-4 different accents on that one verse. I assume he wants to represent all the stereotypical Indian accents one might expect.

The fun doesn’t stop here though as Haji continues dropping gems throughout. Haji represents India’s favorite recreational activity on “Belly Dance.” Personally I prefer nothing else than hitting up the local belly club after a long day of slurpees and cab rides. Nowhere is it clearer that Haji is banking on nothing but a gimmick than on “The Indian Rapper” where the hook declares “he’s the Indian rapper” over and over again while Haji spits generic verses. The funny thing is that when Haji drops the act and accents he’s even wacker since he has an undistinctive voice. The only tracks that are worth checking are those featuring other bay area rappers, but even those border on wack thanks to the production. Producer Gennessee provides a vast array of cookie cutter beats, none of which stand out.

So in the end Haji Springer leaves you with two options, either you can hear him putting on an act and representing Indian stereotypes or he drops the Indian act and starts embodying all stereotypes associated with rap. He likes to drink that “Stunnerade” while riding with “Hustlaz and Scraperz,” all the while “Thizz’n” and smoking “Purple Stuff.” I could understand all this if Haji was somehow trying to fight the stereotypes or show how stupid they are, but there is nothing political or social about “Hello Buddy.” While Haji can lay claim to being one of the only prominent Indian rappers in America, his album offers little to hip-hop fans, Indian or otherwise.