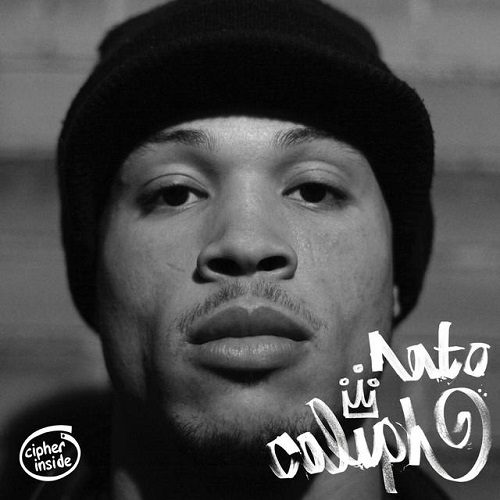 Nato Caliph is such an understated and low-key rapper that he makes Cormeaga or GZA look like Busta Rhymes. Nato doesn’t spit his rhymes, he mutters them under his breath and without exerting any extra energy, as if he were ordering a cup of chamomile tea at a coffee shop. The St. Louis rapper is about as far from Nelly and the St. Lunatics as you can get, both in his delivery and his lyrics.

I’ll be honest: the first time I listened to “Cipher Inside,” I was not feeling it. I thought it was boring and preachy, and I couldn’t get over the fact that Nato was calling for revolution in tone more fitting for the library than the microphone. The more I listened to the album, however, the more it grew on me. A lot of it has to do with the confidence in Nato’s delivery. He speaks softly because he doesn’t need to yell – He KNOWS he’s right.

The first line he drops spells out his mission statement: “A bunch of words to a beat mean nothing if they’re only helping you.” Nato does his best to make every line count, and to use hip hop as a positive force. His lyrics are thoughtful, intelligent, and on point:

“They tried to put us against us and you fell for that
Nothing hurts us more than black on black
I’ve learned new laws so I could properly break them
Stay close so I could properly shake you
I’m better than this
Divine Allah radical on the federal’s list
It’s a trip
Mastered self so I could swim in the pit
I don’t get in where I fit in
I fit in where I get in
[…]
You dissing me? The bottom line is you’re ignorant
Because I provide music for the soul and food for spirit
With King Tut delivery and Garvey lyrics”

There is no cursing on this record, and unlike Master P, Nato doesn’t use this as a publicity stunt, saying the same tired garbage without the profanity. Instead he tackles subjects like racism, black unity, and the war. One of the most powerful songs is “Death Recall,” which is a eulogy to the deceased, whether it be Nato Caliph’s family, friends, unborn children, or even black leaders who are no longer with us. This is NOT just Nato pouring beer on the curb for his fallen soldierz. He goes for something much more deep and personal:

“I’m bringing back my unborn seed that I didn’t give a chance to
Grow up intelligent, pretty, or handsome
And I know it takes two to decide
I pushed the issue
At the time I had too much pride
I really miss you”

Nato can come off preachy at times. He’s like an older brother telling you to act right, and it’s not always something you want to hear. He manages to be right on enough of the time to make his peachiness palatable, and he instills his message with just enough humility to not come off arrogant or self-righteous. That isn’t to say he’s suffering from low self-esteem, which is clear from “Commencement Ceremonyâ€:

The beats, provided by DJ Crucial, Kenautis Smith, Stoney Rock, Tech Supreme, and Lyfestile, are generally as understated and quietly powerful as Nato’s rhymes. Many of them are built around piano and string samples, and while there are a couple uptempo numbers, this is not an album for the club. A few of the tracks suffered from recording issues, but for the most part it sounds very good, and is head bobbing if not banging.

“Cipher Inside” is one of those records that grows on you the more you listen to it. Nato Caliph may not be the most energetic rapper, but he has a quiet determination that is hard to resist. He has created an album that is the perfect antidote to flashy, shallow hip hop, and one that deserves attention.