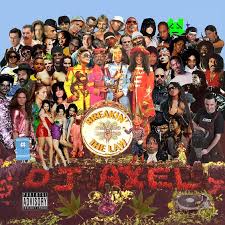 On this year’s White Stripes album, “Icky Thump,” an unsuspecting home owner gets a visit from Jack and Meg White. Making their presence known with the yell “Rag ‘n bone!” they peer over the fence, already making out many an object that could be of use to them. “Look at all this. You don’t want it? You sure you don’t want it?” asks Jack, only to add, “It’s just things that you don’t want. I can use them. Meg can use them. We can do something with ’em. We’ll make somethin’ out of ’em. Make some money out of ’em, at least.” “If you ain’t gonna use it, just give it to us, we’ll give it a home,” he offers nonchalantly yet persuasively. The episode is entitled “Rag and Bone,” and it describes fairly well what the Detroit duo is about. What others heedlessly dump into the dustbin of music history – garage rock, Delta blues, folk, blues rock, hard rock, trash metal, punk – the Whites, being the dedicated ragpickers that they are, turn these varieties into their very own rag ‘n bone rock ‘n roll. Coincidentally, the color-coordinated couple is also “looking for Technics turntables”, gramophones, and, at least in the lyrics printed in the CD booklet (which vary from the recorded ones), even microphones. How much more hip-hop relevance does a RapReviewer need?

If you think about it, the hip-hop producer and the hip-hop DJ possess something of modern day musical rag-and-bone men. True, they have also proven to have an eclectic taste, to know what gets people to dance and to be able to pique the interest of music nerds, but what many of them really did and still do is to scour thrift stores, flea markets, bargain bins, yard sales, pawn shops, conventions, and their parents’ dusty collections for records to spin and to sample. They make use of what other people have no longer use for. To build songs from samples has originally been the poor man’s method to make music. Ironically, some of that music found unexpected success, leading to astronomical sampling fees. But for those who are not afraid to get their hands dirty, there are still many samples to unearth who have been all but forgotten by the world, sometimes including their very author.

Rag-and-bone collectors were early recyclers, traveling the country with carts collecting for example old rags that served as raw material for fabric and paper, or bones used to make glue. They would eventually disappear due to people becoming more mobile and the recycling business turning into a thriving industry, but it’s easy to imagine the profession still being followed somewhere in one form or another. Lest we forget, the popular ’70s TV show _Sanford and Son_ derived part of its comedic value from Fred and Lamont’s salvage schemes. Among hip-hop’s most famed rag-and-bone men (we’ve come to call them crate diggers) are people like Afrika Bambaataa, Prince Paul, The RZA, Marley Marl, the Diggin’ In The Crates crew, The Beatnuts, Large Professor, J Dilla, Pete Rock, Madlib, T-Ray, or DJ Premier. Sample-based hip-hop is a very obvious embodiment of musical recycling, but music in general has time and again been made out to freely cover, sample, and reinterpret itself. Concerning hip-hop, the mash-up, the typically electronic meltdown of two or several songs into one, has already been turned into a live experience with the Jay-Z/Linkin Park collaboration “Collision Course.” Hip-Hop DJ’s themselves have for the longest practiced the method in the form of blend tapes. However, whereas the term blend alludes to a more organic approach (usually not going further than mixing rap and R&B), the term mash-up suggests sparks flying. Once highly unlikely combinations started to surface, the world took notice and the mash-up enjoyed its fifteen minutes of hype. Nowadays mash-ups have their rightful place in pop’s self-referential universe, but resist commercialization as copyright infringement is part and parcel of the artform.

DJ Axel, a Chicago native and Los Angeles resident who has spent three years in London where he drummed and deejayed on the club scene (including spinning for monthly drum ‘n bass parties at The Blue Note), defies copyright laws with his mash-up retrospective “Breakin’ the Law.” His mission is visualized by Guavachild redesigning The Beatles’ “St. Pepper’s Lonely Hearts Club Band” cover with the CD’s strange bedfellows. The artwork is topped off by the priceless image of Ludacris palming Peggy Lee’s posterior on the back of the CD. And indeed you’ll find the two making out musically on “Stand up Fever,” a mash-up of – you guessed it – “Stand Up” and “Fever.” Which makes sense in so far as both compositions have a distinct swing theme. Kanye West’s energetic beat for “Stand Up” is absent, but if you know Luda, you know that he can be energetic all by himself. In fact the juxtaposition of his bow-throwing brashness and her subdued sensuality works well, the problem of this mash-up lies in the fact that the essential mystique of “Fever” gets lost in the mix. The rap vocals are not to blame, rather it is the lack of swing that’s cramping this track’s style.

In the CD sequence, however, it is, along with the other ballroom dance, “Rhythm Inferno” (Lena Horne vs 50 Cent), a welcome breather during an intense listening experience. The opener marries Van Halen’s “Drop Dead Legs” and T.I.’s “What You Know.” As on “Stand up Fever,” DJ Axel tries to create the illusion of the vocalists as duet partners, and the way David Lee Roth accompanies T.I. is really essential to the success of the mash-up. The aforementioned Jay-Z sees several of his hooks recycled in the roaring “Guns N’ Hovas,” based on Guns N’ Roses’ “Paradise City,” which might make some recall that Axl Rose and Eazy-E intended to collaborate before the latter’s untimely death. “Shorty Wanna Feelgood” combines MÃ¶tley CrÃ¼e’s “Dr. Feelgood” with assorted G Unit soundbites. 50 would need some vocal coaching, but Young Buck makes for an excellent rock lead vocalist.

Still within the realm of rock, but with a distinct dancefloor edge to it we have “Another One Bites the Last Time,” which sees the Clipse rhyming slightly sped up over Queen’s “Another One Bites the Dust.” Aside from the fact that Grandmaster Flash already put the hip-hop stamp on the Queen groove once and for all in his “Adventures of Grandmaster Flash on the Wheels of Steel,” this chance collaboration is miles ahead of the Refugee Camp remake from 1998. Surprisingly dancey is “Control Myself After Midnight.” The J.Lo-featuring “Control Myself” was an insufficent throwback to L.L.’s “Walking with a Panther” days to begin with, and to see it pressed up against Judas Priest’s “Living After Midnight” is twice as odd. At first it’s like mixing oil and water, but once you realize it was Axel’s intent to make a fun party track, it makes more sense than it really should. Still it’s doubtful if the Priest fans that are also present on this track (quoted from 1986’s _Heavy Metal Parking Lot_ documentary) would approve.

The good thing about mash-ups is that they don’t have to make too much sense. Compatability is a minor issue, as long as the pace is kept. But sometimes there’s a level of connectivity you wouldn’t have thought possible. A prime example here is the seamless interaction between Bob Marley & The Wailers’ “Could You Be Loved” and Lupe Fiasco’s “Kick Push.” There’s a traveling feel to “Could You Be Kicked, Pushed & Loved” that acts as the perfect companion to the young skateboarder’s wanderlust, and on the lyrical level Lupe’s “Rebel to the world with no place to go” corresponds very well with Bob’s “Don’t let them change ya.” Throw some James Brown percussion into the mix, and you have a bonafide remix that takes the Lupe Fiasco original to another level.

An almost too typical mash-up is “Without Billie Jean.” When Eminem meets Michael Jackson everybody gets curious. True to the genre’s spirit, the pairing is not without irony, but musically there’s not much merit in it. Decidedly spicier is “Kiss My Neck Off,” an x-rated combination of Khia’s “My Neck, My Back (Lick It)” and first Prince’s “Kiss,” and then “Get Off.” “Kiss” alone would be a tad bit too innocent with its self-restriction to a simple kiss, but with “Get Off” and its “23 positions in a one-night stand” boast, it becomes obvious that if there’s one non-rap artist here who won’t mind the treatment, it has to be Prince. Overall the 6-minute closer is probably the most refined mash-up of “Breakin’ the Law,” Prince’s exclamations of excitement adding pure sensuality to Khia’s more business-like instructions.

On a completely unrelated note, “Suck My Kiss” is the name of one of the songs used in “Blade’s Wu-Tang Chili,” which gives us quotes from various “36 Chambers” tracks plus an obscure verse from an obscure Wu third tier over hard RHCP riffs. On the R&B tip, “Real Back Poppin'” and “Lil’ Brick House” rely on songs that already have a history in hip-hop, Cheryl Lynn’s “Got to Be Real” and The Commodores’ “Brick House,” the latter taunting the self-described “black Barbie” Lil’ Kim with its “She’s might-mighty, just lettin’ it all hang out / She’s a brick house” chorus.

Mash-ups have a way of being purposely disrespectful, but what kind of rock, pop or rap fan can’t take a joke? I revere Stevie Wonder’s “Superstition,” but I really don’t mind it being intertwined with Dr. Dre’s “The Next Episode,” in fact as far as mash-ups go, Axel’s “Snooperstition” would be a match made in heaven if it wasn’t almost ruined by absolutely awful cutting towards the end. Which leaves us with the remaining mash-up, the overdue demonstration of just how much Fergie’s rap endeavors are rooted in the ’80s. “Push it Fergasonic” mixes “Fergalicious,” Salt-n-Pepa’s “Push It” and JJ Fad’s “Supersonic.”

“Breakin’ the Law” is a party mix with a twist. It should easily persuade fans of each genre to accept the presence of the other parties. In fact, if DJ Axel’s compositions achieve a higher purpose, it’s that they show how all-American rap really is. Or, to put it less nationalist, how universal music can be.