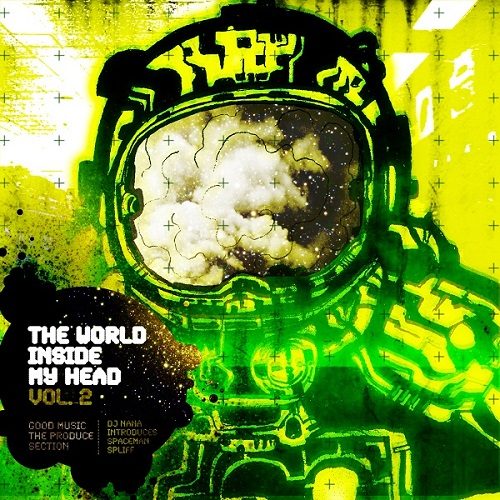 For those wondering, DJ NaNa didn’t just make up his name. NaNa is actually a very common name in Ghana and a name shared by wrestling manager Prince NaNa in the Ring Of Honor promotion. Why does this matter? It matters for the fact that DJ NaNa is a Canadian born DJ/producer, with roots in Ghana, and who produces/spins a very American form of music. This diversity in culture can only be a positive when it comes to DJ NaNa’s craft as he’s been exposed to music most hip-hop fans would never peep. His latest release “The World Inside My Head Vol. 2” reflects this diverse musical background as DJ NaNa gives a musical melting pot that is both innovative and head nodding.

NaNa kicks things off with “Closer (Gimme Me Some More Refix).” The song is an upbeat mix of stuttering drums, fat bass, and the strings from Busta Rhyme’s “Gimme Me Some More.” Vocals from Busta are thrown in the mix as well. It’s not better than the original Busta song, but it is a very interesting mix of music. “One More Chance (Remix)” hits us next and isn’t the Biggie remix you would expect. Instead, we get a decent upbeat R&B cut with a few dope scratches and samples thrown in the mix. “Gimme the Cue” follows and is a unique musical interlude that makes NaNa stand out – not too long, interesting but also entertaining. “That Break” comes in next and ends up being one of the album’s few missteps as the repetitive instrumental gets a bit heavy on the ears at three minutes long. “Wheel Life” picks things up a bit as the instrumental selection is more up tempo and interesting than the previous. “Top Billin'” breaks up the instrumental monotony but ends up being an uninspired freestyle. “Morris” gets things going again as the frantic instrumental number doesn’t stretch for too long. “Who I Am (Remix)” finds NaNa getting into his best groove on the project. As is the case with most producers, the music tends to be much more entertaining with rappers or singers on it unless it was specifically made to stand on its own. The vocals on “Who I Am” aren’t spectacular but the music switches up enough to make for a decent listen. “32Bloaw (Something For The Streets Refix)” is more of the same from NaNa – uptempo beat, vocals scratched in at parts. “Untitled” ends up being the highlight of the album as Turbin and Planet Asia join NaNa to wreck the beat. Both emcees come tight on the album and NaNa’s beat does the job. “Never Leave it Alone” is another track where emcees are prominent and continues the welcome change of pace from instrumentals. NaNa hits us with another instrumental scratch session with “Com’on Y’all” before ending with “Black Eurythmics,” a more conventional track.

To say DJ NaNa is hard to define would be an understatement. For good or bad, “The World Inside My Head Vol. 2” is an eclectic mix of tracks that is hard to confine to one genre. At his heart, NaNa is a hip-hop producer, but just not a conventional one. The album sounds to be half inspired by J Dilla’s “Donuts” and half inspired by the traditional producer’s album. The mixture of instrumentals, rap tracks, and mixes may not be everybody’s cup of tea, but it definitely makes for an interesting listen. By the title alone, it seems this album wasn’t meant to be a universally appealing project., but NaNa shows us he has enough talent and potential to appeal to more mainstream fans if he ever chooses to do so.