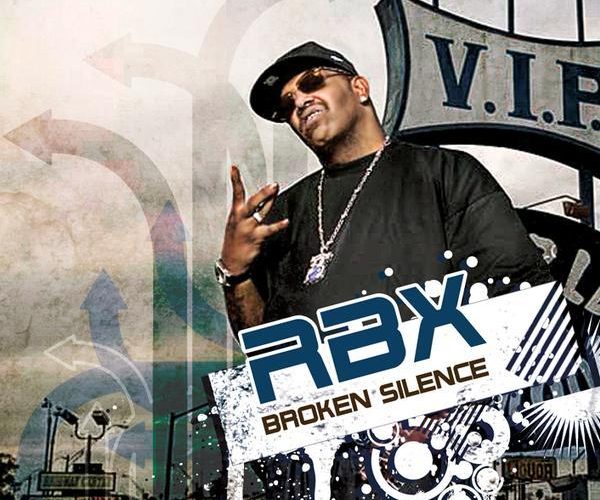 Known most for his gravelly voiced appearances on classics such as The Chronic and The Mashall Mathers LP, RBX has been moving, and in some cases frightening, crowds for over fifteen years. A Grammy award winning artist, RBX recently released a full length album titled Broken Silence and plans on following it up in 2008 with Unanimous. Even with all that solo work listeners can still expect to hear him continuing to guest on other people’s work, as well. He notes “I need to holler at Em. You need to shoot that shout out. That’s my dog.” This week the man who describes himself as “a dormant volcano” sat down with RapReviews to discuss his storied career, how his work now differs from his work in the past, and why he’s happy rappers have taken a step back from the idea of “keeping it real.”

Adam Bernard: Before we even get started with the real questions I heard you just had some work done to your car.
RBX: Actually I got a new radiator put in because I saw coolant leaking and I don’t like coolant leaking out the car, that’s not a good thing, so I have them doing some work on it. It’s a big ass BMW and it can’t leak. If it starts leaking that means it’s gonna lead to a bigger leak and I might be out somewhere one day and that shit bust on me. It’s pretty much a maintenance issue.

AB: So this isn’t a Pimp My Ride situation.
RBX: Aw naw, it’s a nice BM but no it’s not getting flashed out, it’s pretty much a maintenance thing and that’s it. You pull up, you’re leaking coolant, that’s not cool. Girls lookin at you like damn, his car’s leaking fluids and shit. Yeah, that’s not a good look. If you can rectify it you might wanna just go ahead and get that cleaned up.

“That’s exactly what I’m saying. ‘Hold on baby, let me see if I can get a jump start.'”

AB: Yeah, I don’t think the ladies are going to wait around after the show while you get your car fixed.
RBX: You dig! That’s exactly what I’m saying. “Hold on baby, let me see if I can get a jump start.”

AB: Moving to the subject of your music. Broken Silence is the new album. Tell me a little bit about what silence you’re breaking.
RBX: The silence of me not really actually having a record that I control and that I was the driving force behind without censorship from major labels or VPs who don’t want you doing this, don’t want you doing that, can’t say this, can’t say that. This is me saying what the fuck I want to say.

AB: What’s the average person going to learn about you from this album that they don’t know already?
RBX: That I’m nice. Everybody thinks I’m just a voice. (growls) But he ain’t rapping, he ain’t got nothing to say. That’s kind of how I was in some situations when I was with some of my other cats. (growls) and then I’m gone. Motherfuckers be like “what was that?” You didn’t get to really hear me rhyme, you’d just get to hear me do a little somethin something. They basically heard the voice, but now they’re hearing me rap.

“I was the monster. RAWR! I was that. Listen to The Chronic and you’ll see what I’m talking about.”

AB: Are you saying that your being viewed as “just a voice” was almost justified back in the day?
RBX: Yeah, cuz back in the day everybody had their part to play. Dre with the beat, Snoop was the young MC who got all the girls, Daz with the bang bang, Warren G had his role; Dre knew what the fuck he was doing, he incorporated all of this and I was the monster. RAWR! I was that. Listen to The Chronic and you’ll see what I’m talking about.

AB: How did the folks you had worked with in the past react to this really lyrical side of who you are?
RBX: You know what, honestly, I have not heard one bad thing. I figured there were going to be some haters and some naysayers, but not one. My niggas was like, “we ain’t surprised. We know you. We were just waiting for you to shit.” I’m thinking I’m gonna get some “YEA RBX,” but I’ve been getting “you did what we thought you was going to do.” I don’t get no pat on the back or nuttin. I kind of wanted to hear “you have room for improvement,” but nah, “that’s hot,” that’s all I get.

AB: Taking that situation you went through, should we be looking at some of the younger MCs of today and thinking more of what they might be ten years down the line, in effect saying let’s give them a few years?
RBX: It’s not a lesson. I ain’t no rap guru godfather. If they’re really into it there is an automatic progression that takes place. A lot of MCs out there can do their thing but there’s not one that can knock me out the box. Right now there are some MCs out there that are hot, they’re nice, but they can get knocked out. I’m one of those you can’t knock out. As soon as I hear what it is I’ma fire a missile back. I can’t be beat and I’m confident with that.

AB: You’ve worked with a lot of legendary artists. With Broken Silence you have your own voice. What makes you better now than you were back in your Chronic days?
RBX: I didn’t know nothing then. Now I can see things a little better and clearer. Clarity is the key. Sometimes you try to help folks and I don’t know what’s wrong with society today, but if I had gone about all this Hollywood and gotten all the known bigwigs to do the record the first thing cats would have been saying is “oh he don’t come down and work with the underground cats.” When I go try to work with the underground cats the first thing they try to do is take me out to box like on some battle shit. I’m thinking in my head “what an idiot. I’m down here trying to help you, we’ve put this together and that’s just an attempt to divide right there.” There are big conflicts that I have but I get past them because I’m from the street and nobody can say nothing because I rap good and I’ll smash they ass. So basically me going down into the pits was just a way to rejuvenate my whole thing and keep everything sharp and precise.

“Kris was like ‘Fuck that! Turn the music off! A capella!’ I jumped up on a speaker and just shit.”

AB: Over the past fifteen years what have been some of your favorite memories from all your performances and studio sessions?
RBX: There was one time, I think it was Rock the Bells, I was just going on stage to watch KRS-One get down. I was NOT in performance mode, I was NOT supposed to get down, I was just up there to support my brother and somehow… Kris didn’t even know I was out there, he was just doing his thing, but he did a move where he spun around and saw me. He said “what!?! Is this RBX on the stage!?!” And it was a wrap. I think there was Nas, Talib Kweli, Freestyle Fellowship and we just shit! We just shit on 16,000 motherfuckers and Kris was like “Fuck that! Turn the music off! A capella!” I jumped up on a speaker and just shit. I remember that, that was fun. I just really love what I do.

AB: What do you feel has been your greatest accomplishment?
RBX: Aw man, just being alive. You don’t even realize that is a job. Everything, all that extra shit, it’s nothing. Houses and all that shit come and go and people stressing and worrying themselves behind some material ass shit when they can just live, that’s enough. Everything else can come and go, don’t trip. Everyone wants the finer things but if you had a nice ass house and a BMW and all that shit but you didn’t have no oxygen…

“I like the fact that niggas is getting back to headbanging. It was never meant to be a physical altercation, or go get your gun.”

AB: Good point. Finally, what do you like about what’s going on in Hip-Hop today?
RBX: You know what, actually, I like the fact that niggas is getting back to headbanging. It was never meant to be a physical altercation, or go get your gun and kill a nigga. You can talk about it, but c’mon now, when all that bullshit is blurted out, “we gonna keep it super real,” that’s when they start killing. On “Fly MC” Special Ed was talking about he was flying on his jet and kicked the bitch through the cargo hatch. Everybody knows he wasn’t in a jet kicking the Queen of France through a fucking hatch, but they didn’t send nobody out to fuck with Special Ed about that. It was hot, but then you couldn’t do shit like that, people were like that shit ain’t real and everybody’s talking really really real like I’m going to come to your studio with my AK and kill you. No! Slow down, buddy. That’s kind of where the problem came in. Right now rap is realizing I’ma get at you, but I ain’t really trying to come and kill you and your family, homey, I’ma try and bust your head open with these verbs and that’s what it was meant to be. At the end of the day I’ll see you, we can smoke a blunt and have a burger together, dawg, but when I’m doing my thing in the studio I’m a monster and I’ma try to slice your whole jugular out, but it’s words. There’s a difference between some rap shit and some not rap shit.

AB: I’ve noticed quite a few rappers who never had rap sheet, or who only had small ones, have been getting into a lot of trouble for starting to believe their own rhymes.
RBX: Idiots. And that’s what happens. I ain’t gotta prove shit. Matter of fact I’m trying to live some shit down. I’m soft skinned. I ain’t trying to act hard. Everybody else trying to act hard, in all honesty it’s on some reverse osmosis and that’s what you gotta remember. Cats that be acting like they all hard be the softest motherfuckers in the whole building. It was always the case in the streets that the cats who don’t say one motherfuckin word be the most vicious motherfucker in the whole spot. All that rah rah, that’s all for hype and record sales. That’s bullshit.