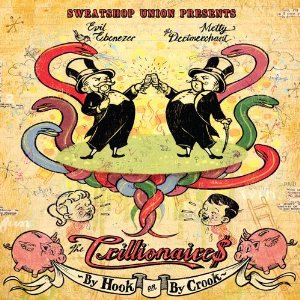 The Trillionaires :: By Hook or By Crook

Concept albums present difficult challenges. Not only do concept albums need to be thematically cohesive, the emcees are also asked to do something few emcees do well â€“ act. The pressure of assuming a role for an entire album is something most emcees do not take well. Metty the Dertmerchant and Evil Ebenezer look to change that with “By Hook or By Crook.” Representing Sweatshop Union and with the help of an impressive guest list, the duo sets out to give us a “tongue and cheek commentary on the greed and ruthlessness of modern society.” While one could reasonably expect a CD full of swagger and ballin’ spoofs, Metty and Ebenezer instead give us a balanced, if somewhat inconsistent, take on social commentary.

The intro “Recession Proof” mixes a mellow singing with money-oriented vocal samples and sets the tone nicely for the rest of the CD. “By Hook or By Crook” finds Evil Ebenezer doing his best to emulate the money focused, criminal minded lifestyle:

“Yeah, it’s the Trillis, after the green billis
And them gold bricks, melt them down to my fillings
No feelings, almost 6 feet tall
Slick back my greasy hair, tape my name in the stall
It’s Ebenezer and Metty the Dert, ready to murk
Send me the word boy, you know I’m shredding my shirt
So what’s the word on your necklace? Let’s get those links cut
Don’t make me lay you down in front of that Brinks truck”

The purpose of the song is to mock the money making mindset that can rule hip-hop, but while the message is there, the sarcasm and humor is almost too subtle to serve its purpose. By the time you reach songs like “Five Finger Discount” and “Slumlord Trillionaire” it is evident that Ebenezer and Metty’s sense of humor and wit is not as sharp and stinging on ever track as one would hope for. “Five Finger Discount” is a short song telling the story of shoplifting, with little in the way of the “tongue in cheek commentary.” “Slumlord Trillionaire” finds Ebenezer spitting with more inspiration and humor:

“The greasiest beast in the streets is me
Hot knive your baby’s souls when I’m babysitting
Oh yes I’m that mess so don’t test
Fry his little toes up and take em straight to the chest
Jack him up for his wallet, I’m a family man
Then I smash up the mall like a battering ram
You wonder how I could be so cold and bitter?
I even stole your pet bird and I fed him to my lizard”

The album suffers due to these inconsistent moments. It wavers between sharp criticism, over the top humor and a few blander, less focused attempts at social commentary. Tracks like “Looks So Good” don’t really fit into the flow of the album at all. “Wolf Boy” is another over the top moment that works, but it is followed up by “Hollywood Squares” which is a much more literal critique on emcees who front in the game. Both tracks are dope for what they are, but give the album an inconsistent feel.

Musically, the album shines the brightest as Metty the Dertmerchant provides a solid combination of smooth beats and clever samples. Conceptually, the album doesn’t quite live up to the hype. While some songs fail to fit with the theme of social commentary, greed, and material things, others take entirely different approaches. Furthermore, the tongue and cheek element to the album isn’t always readily apparent. While the duo gets props for not going the cheap and easy route with their sarcasm, the dry humor exhibited at times on the album fails to impact as heavily as one would like. The duo obviously faced an uphill battle in trying to find the right balance for this concept album and they get credit for what they delivered. Despite its inconsistent moments, “By Hook and By Crook” maintains a consistent quality level and provides plenty of dope vibes to warrant a listen.

The Trillionaires :: By Hook or By Crook
6.5Overall Score
Music7
Lyrics6