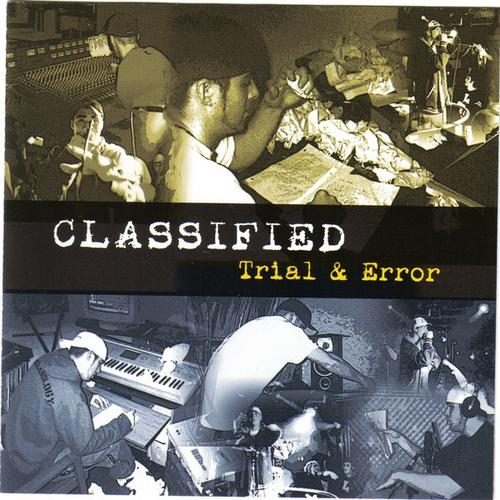 Through ten years of trial and error, he has propelled himself from a high school rap act to one of the biggest names in the Canadian rap scene. That’s right, Canada. Known here in the US for only providing unwanted cold fronts in the middle of May now has something much more intriguing to offer: Classified. Classified was nominated for Rap Recording of the Year and Rap Video of the Year by the Urban Music Association of Canada for his work on “Touch of Class” back in 1999 and has since been releasing other material to perfect his skill, all leading up to “Trial and Error.” Dubbed “the record I’ve been trying to make the whole time” by Classified himself, he wastes no time showing off his battle rap skills. Check the first single from the album, “Heavy Artillery”:

“Now is you ready for the man stepping in with the heavy artillery
Both hands cocked in the back ready and willingly
Spit fire over tracks, you ain’t feelin’ me
Judgin’ how I look, not my lyrical abilities
Please, this is for my people in the background
Stayin’ out the lime light, moldin’ how a track sounds
Walk with my cap town, Class never back down
Weigh, hold a half pound, fight ’till the last round
[…]
I’m in the wrong state of mind
All you flashy rappers talk and I’m here to take your shine
Take your props, make ’em mine, so how you like me now?
I see your temper rising, you wanna strike me down
But I will stay here, and whether or not I play there
Depends on these rappers actin’ like they need some dick hair
Children, stop playing start building
I don’t care who ya know or if you pushed a hard million
It’s hard dealin’, I’m almost ready to explode
Everybody wanna hate but we really gotta grow”

One thing will become obvious before the third track begins: Classified has talent on the mic. His midrange voice is clear, never annoying, and a joy to listen to. Changing pitch and uniquely emphasizing each line differently to get the vibe across turns Classified’s complexity-lacking lines into very entertaining verses. Another skill that Classified has a nack for is creating beats. Whether it’s sampling together strings of classic samples or crafting new beats, Classified is definitely versatile when it comes to laying down the tracks.

The most conceptual track on the record, “3 Beats & a MC”, ties three separate beats in to one song. Classified shows off his best track making abilities in “This Is For” and “Confused Confrontations” by mixing pianos, guitars, strings, and even flutes in to some very appealing background music for his already easy to listen to voice. Unfortunately, by less than half-way through the album, I began to wish he had spent less time fiddling with the turntable and more with his pen. With the exception of a few songs, every track seems almost totally based on battle raps. This wouldn’t be so bad if his battle raps were clever, but, speaking generously, his are merely mediocre. On “Just The Way It Is”, Eternia shows up Classified and DL with her easy flowing battle verse:

“I played these strings as a kid, I play these strings like a violinist
Or a violent man who’s life is finished
In it ’till the death of me, ’till bones are all that’s left of me
Look and ya’ll see the remedy, the authencity
Eternally everlasting, mappin’ out this craft till my last breath
Yo bury me with Pharaohe in my casket
I mastered this massive maze, avoid disaster
And came to my senses, learning lessons to harass
I’m raised right, night or daylight, never got stage fright
Ya fame might cash for the moment, but I slay mics
I stay tight, Class and DL, you know they’ same types
Rappin and recitin ‘cuz we enticin a new life
It’s like that and that’s just the way it is
Until my kids in the next life, my mind’s on the biz
And ya’ll can Classify the raps that I exhibit
Exquisitely and simply, Eternia that’s reppin this”

After a pointless 13 second interlude serving no other purpose than to up the track count, comes the title track “Trial & Error” and more battle raps:

“And ever since day one, stuck to my guns
Same ole’ look, never changed none
And some people act strange and dumb
Say sold out ‘cuz fans, I gained some
Everybody explain to me
How this game came to be a fucking joke
Everything’s gone up in smoke
Any day now I’ll bust an O
CLASS, got kids to pass
It’s deep than that, you can’t pass class
Fall down, then get off your ass
It ain’t a pep talk, it’s a lesson to last
You ain’t underground cuz you make a borin’ track
You an amateur, wouldn’t ignore the fact
Scar heads in the back book and flip off
Don’t talk or you might get your lip off
Start shit like Superbowl kick off
Take time like I just stole your wrist watch”

The album ends with “Like It’s Criminal”, featuring Bonshah, J-bru, and Spesh K. This song, about desperate crimes and how desensitized they become, harbors the most heartfelt verses laid out on a dark, mellow, piano-laden backdrop. Once again, it seems it takes a guest appearance to bring out anything other than battle raps from Classified.

Classified is a very skilled producer with a voice for rap. However, the majority of songs on this album are simply repetitive battle raps without meat. If you’re looking for songs to bounce to, songs that provoke a vibe and not a thought, then “Trial & Error” is the album for you. I would have liked to have seen more depth on at least a few more tracks; his voice is made for hip-hop and battle raps just don’t do him justice. Classified said this was the album he’d spent his whole career trying to make though I hope this is far from his last. Though this album is far from an Error, another Trail from Classified could leave other emcees wondering why they didn’t just use guess-and-check.