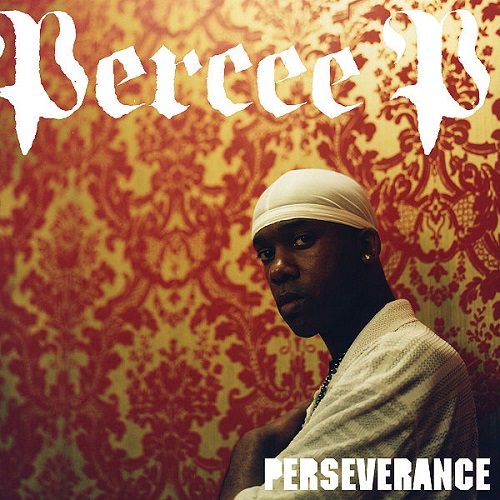 I first encountered Percee P at a Madlib show last year in Seattle, selling his CDs to people outside the club. Madlib couldn’t perform that night, but it didn’t matter because Percee was absolutely on fire. With J-Rocc providing the beats, Percee attacked the mic, keeping the crowd enthralled with his booming delivery and insane verbal acrobatics.. After that show I was sold on Percee P.

“Perseverance” comes almost 19 years after his first single dropped and almost 30 years after he first got into hip hop as a 10-year-old growing up in the South Bronx. That makes him both old school and old by hip hop standards, which is potentially problematic in such a youth-obsessed culture. Percee’s bombastic, battle-rhyming flow relies heavily on verbal calisthenics and wordplay, neither of which are valued as highly today as they were back in 1988.

This works to his advantage in some ways, because there aren’t that many MC’s today who sound like Percee. His commanding flow and delivery immediately stand out. It reminds older listeners of the rappers they were listening to when they first discovered hip hop. For younger listeners, it delivers an experience that is wholly unlike what the majority of today’s MCs are offering. There are no catchphrases, vocal processors, or dance moves on this album. Instead, Percee offers up 18 tracks of relentlessly confident braggadocio. “Last of the Greats” is the perfect example of his boasting style. While a lot of MCs threaten people with guns, Percee makes it clear that his rhymes are lethal weapons:

“I spit bars that inflict scars
Won’t get far before chicks’ bras
And pats unzip far quicker than Bronx strip cars
Percee’s raps are worse after the first chapter
A nurse will have you before the church pastor
Then the hearse will snatch you
Can, you hear raps that will pierce lungs
Collapsing near death
You gasp for air like the earth losing atmosphere
Get your click bro, or tip toe before I spit flows and rip those
Mouths as big as hippos
That’s how shit goes so keep your lips closed”

“Last of the Greats” also sums up the lyrical content of “Perserverance.” Most of the tracks see Percee demonstrating his skills on the mic through words and deeds. He switches it up on “The Man to Praise,” and “The Lady Behind Me,” which outline his history with hip hop, and “Ghetto Rhyme Stories,” a cautionary tale about messing with the wrong type of female. Beyond those three songs, however, “Perserverance” is strictly boasting and battle raps.

What makes “Perserverance” more compelling than just revisiting old Big Daddy Kane records is the fact that he is accompanied by one of the best beatmakers of this millennium. Madlib produces the entire album, and his twisted funk is the perfect compliment to Percee’s rhymes. A lot of the tracks are made up of Madlib’s signature chopped up soul samples, some of which were on display on the first Beatkonducta album. He always manages to keep things from getting pedestrian, and his subdued style gives Percee room to shine. Madlib also mixes it up enough to keep things interesting, and as a result the album never drags. “Legendary Lyricist” has an amazing funk break, “2 Brothers From the Gutter” uses an 8-bit Nintendo sample, and “The Dirt and the Filth” has an ominous beat complete with metal guitars. Madlib brings his insane cratedigging skills and love of music to every track, which makes the beats on “Perserverance” every bit as enjoyable as the rhymes.

The other thing that keeps Percee’s relentless flow from getting old are the guest spots. There are some great features on this disc that provide a welcome contrast for Percee: Madlib’s stoned monotone, Aesop Rock’s stentorian flow, Chali 2na’s Cold Crush rhymes, and Guilty Simpson’s gutter growl. All of the guests help to balance out Percee’s style, and keep the album from getting monotonous.

“Perserverance” is the perfect marriage of old school skills with new school technology and technique. Both Percee’s rhymes and Madlib’s beats reverently reference the past while looking to the future. I’m not sure why it took 19 years for Percee to drop his debut, but I hope he’s already working on his sophomore album. I don’t want to have to wait another decade to hear new material from this talented and hard-working MC.