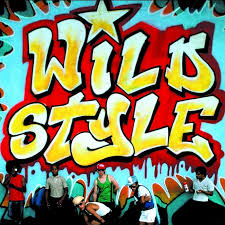 The movie “Wild Style” came out when I was 8 years old, exactly one year before I got into hip-hop. Even if I had been breaking and scratching when I came out of my mother’s womb there’s still no chance I would have seen this movie in theatres – for one it was rated R and for another no movie screen in central Iowa would have shown it. Where I grew up people listened to Alabama and the Oak Ridge Boys. Pop music was already a huge dividing line between my generation and the previous one even before the melodies of Run-D.M.C. started to infiltrate MTV, and as many of my peers listened to country as did pop or rock. Needless to say the audience for a hip-hop movie where I lived was nonexistent. In hindsight it would have been funny if Wild Style came out just five years later when I was 12 or 13 and I found a theatre that was not only willing to show it but to let me in underage. Hell they would have HAD to let me in because odds are I would have been in an audience of ONE. I could find Kurtis Blow at the Half Price Bookstore and Eric B. & Rakim CD’s at Co-Op Records, but try finding even an inoffensive hip-hop comedy like “Disorderlies” at the local drive-in and it just wasn’t happening. I don’t even remember a single Spike Lee movie playing anywhere near I lived until “Malcolm X” in 1992.

To make a long story short my first exposure to “Wild Style” actually came in the form of samples from the SOUNDTRACKon the Nas “Illmatic” CD. Most notably the “Subway Theme” was played at a slow speed while Nas and crew divided up their loot on “The Genesis.” Little did it dawn on me the significance of the sample at the time, or the fact it even WAS a sample in the first place. My passion for hip-hop had grown by leaps and bounds in the ten years between “Wild Style” and “Illmatic” though, and leaving for college exposed me to a wider peer group – a FEW of whom were as passionate about hip-hop as I was – not many, but just enough. In time I was able to screen a copy of the movie on videotape, and I believe MTV even had an all hip-hop weekend where they showed classic hip-hop films like “Krush Groove” and “Wild Style” back to back. Needless to say when I discovered Rhino Entertainment had re-released the soundtrack on CD copping it was not even a question – it was a necessity. Looking at my copy actually makes me nostalgic for the time I lived in Michigan after college, because I still have a sticker on the case that says “Encore Recordings Guaranteed – $8.49.” That store in Ann Arbor got an undue amount of the limited funds I had, but every penny was money well spent.

It’s crazy now when I look at the time span covered in this review. 25 years since “Wild Style” came out in theatres. 15 years since Nas shook up the hip-hop landscape with “Illmatic.” 10 years since the “Wild Style” soundtrack was re-released by Rhino. There are children today buying Soulja Boy albums who weren’t even alive when this soundtrack was RE-released, let alone originally pressed to wax. Even though I caught the movie over 10 years after it was first filmed and distributed I still get nostalgic for “Wild Style” listening to this soundtrack given I first saw the movie almost half a lifetime ago. Nostalgia is an important word to keep in mind when it comes to the “Wild Style” soundtrack. In the context of the motion picture you don’t notice that the raps are super-simplistic, even for the era of hip-hop rhymes that they came from. That’s largely due to the fact the movie is not really about the rap – it’s about the adventures of Zoro in the cutthroat graffiti scene of NYC and the people who would cash in on his talent even while illegal burners kept him one step away from jail time.

To be certain the movie lived and breathed all the elements of hip-hop culture, but on the “Wild Style Soundtrack” the musical elements become stale and repetitive. The “M.C. Battle” sounds the same as “Fantastic Freaks at the Dixie” sounds the same as “Cold Crush Bros.” sounds the same as “Double Trouble at the Amphitheatre.” This is not a coincidence because all of the different rappers flow to the EXACT SAME BREAKBEAT. No matter how much you love the dialogue or rap samples taken from the movie on classic hip-hop records, you’ll be really damn sick of several of these breaks if you listen to this disc start to finish. The liner notes both credit and blame Fred Brathwaite (Fab 5 Freddy), Chris Stein, David Harper and Lenny Ferari for all of the instrumental beats. I understand it may not have been obvious watching the film how much a limited number of breaks got reused, but it’s painfully obvious in this context. Even the “Subway Theme” that I love so much gets recycled plenty, from a “Cuckoo Clocking” re-interpretation to a “South Bronx Subway Rap” by Grandmaster Caz to a “Gangbusters Scratch Mix.” Nostalgia wears thin pretty damn quick – down to a micron of thickness in fact.

That’s not to say there aren’t plenty of classic moments on the “Wild Style Soundtrack.” The “Street Rap” by Busy Bee is old school at its finest and only has one drawback – it’s only 43 seconds long. The “Basketball Throwdown” between Cold Crush Bros. and The Fantastic Freaks is an equally ill classic. Even with the amount of times the same breaks get recycled on this album it’s still damn hard not to enjoy “Rammellzee and Shock Dell at the Ampitheatre” or the precise scratches of the “Military Cut” by Grand Wizard Theodore. The score in this case may not accurately reflect how much I enjoy throwing this soundtrack on every now and then for kicks, but it’s definitely not something I keep in daily rotation. In fact reviewing this album just serves to remind me of what I REALLY need to do – pick up a copy of this film remastered for DVD format.