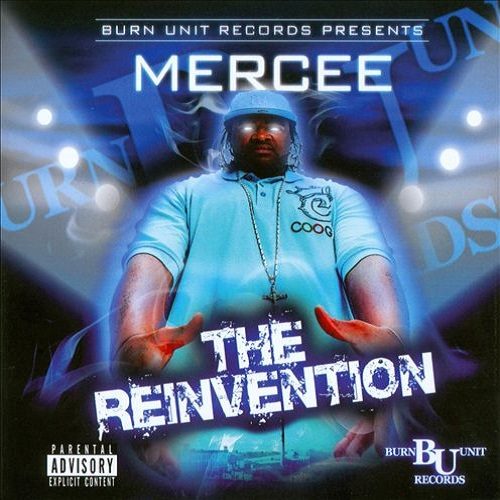 Most forward-thinking Hip-Hop fans have been waiting for a young, hungry, emcee to come through and change the game. The evolution of the rap game relies heavily on the new blood, who have the opportunity to decide whether they are going to simply follow the paths blazed by their predecessors or break new boundaries themselves. MerCee, from Durham, NC has his heart in the right place by naming his new album “The Reinvention”, but does he have the know-how to carry out these high expectations and break new ground in an oversaturated market? Or, are his wheels just turning like most everyone else?

Burn Unit Records Inc. calls MerCee the “first entertainer emerging from Durham, North Carolina to be destined for fame.” Pardon me, but one of the finest groups currently on the scene, Little Brother, formed in Durham, NC when they met (Big Pooh, Phonte and fomer-member 9th Wonder) at North Carolina Central University in 1998. MerCee, however, has a style more similar to the typical rapper adorned in bling, complete with misogynistic and violent lyricism. No disrespect–there is a reason that these staples in rap music have succeeded and the featured artist shows glimpses of an ability to work those standards in his favor.

Only a few tracks deep into the “Reinvention” and the listener will realize that they are not going to hear the pretense presented with the title of the album. Rather, we are offered more of the same rap music that relies heavily on catchy hooks and bouncy beats. “Blow Da Whistle” for example, not surprisingly, uses a referee accessory to drive the song, something that many Southern rappers have utilized and Swizz Beatz seems to be a big fan of. MerCee starts his diatribe by speaking over the track, setting up the song by saying, “Smitty what it do?…I’m going to blow da whistle on these niggas, and these bitches.” Smitty refers to Boss-Smit, the board man for most of the album; whereas people that hear it for the first time might just assume it is the far more famed one associated with the likes of T-Pain. Meanwhile, the openers “2-3 Dollar” and “I’ma Beat That” focus on the sexual drive of the emcee protagonist.

MerCee seems to find a better groove when the narrative of his songs dig into deeper issues. The title track is a good example of this, as it is about the plight of the ghetto-raised man. Bre, a R&B singer, adds an element of depth to the track as she handles the chorus, singing:

“I keep on struggling trying to find a new light
The more I struggle seems the shit just ain’t right
I fight temptations cuz my soldiers, they’re right
They give up more for just losing the fight”

MerCee basically plays second fiddle on the song. It has a strange construction that only features two very short verses (of maybe 8 bars) before bridging back into the hook. Nonetheless, it is one of the better songs that draws away from the mundane, but before you know it he comes back with “Exit”, another attempt at a club banger. “Product of the Ghetto” is another more subdued song that could be considered “The Reinvention pt. 2”.

There are several occasions on the disc that MerCee references popular rap music, but none with more effect than “1993 Niggas From Da 90’s”, which cuts loose as a list of the artists that influenced him, even though the LP seems to favor a more Southern style than what he mentions:

“I came up off that Wu-Tang
Ghostface Killah for a nigga
Test that thang
Big homey selling kane
Try to keep it on the low
bangin that Doggystyle that was back in ’94
My cousin sellin’ coke
Got about a truck load
Big ass herringbone
15’s in the trunk, yo
Stay with a new bitch
Fresh ass new chicks
M.O.B nigga , I was all on my Snoop shit
Ain’t no fun if the homies can’t have none
Merc put me on Fat Joe and I love Big Pun
Big said “Mo Money, Mo Problems”
Well, I figure that’s a problem I mind solvin’
After Makaveli I was all on that Jigga shit
“Streets is Watching” “Fuck you, pay me”, nigga I’m feelin it
I love ‘Face too. And niggaz ask me why I never seen a man cry
Til I seen a man die”

It’s not a brilliant work, yet it does have a throwback feel to it, compliments of the jazzy horns that are appropriately picked straight out of the mid-90’s record crate.

That’s the feeling of most of the “Reinvention”. There is a major lack of balance, as there are times that you can take the headliner seriously. Then, there are certainly times that induce a cringe-factor for being painfully trite. There is no feeling that he is ‘re-inventing’ anything about the rap landscape as most of the songs reference other rappers, have been done before and fit squarely into the constraints created by what is consumed. Despite his good intentions, MerCee, for the time being, is a character of rap music rather than an advancer.