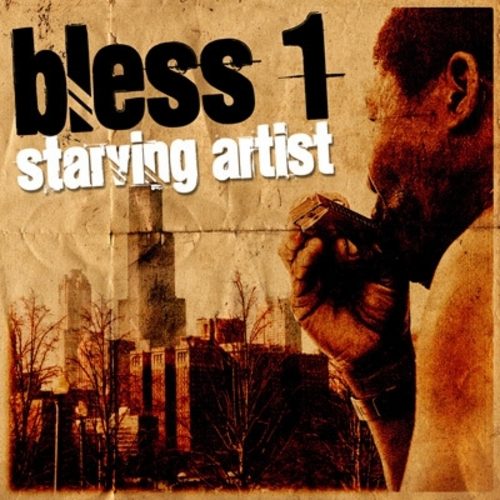 I’m sick of defending hip hop. I am tired of explaining to people that not all hip hop has violent or sexist lyrics, and that the fun but simplistic ringtone rap doesn’t represent the art form as a whole. From now on, I’m just going to tell people to download Bless 1’s “Starving Artist” from his myspace page. Bless 1 is a producer/rapper out of Chicago who exemplifies the best of what hip hop can be with his intelligent wordplay, thoughtful lyrics, and jazzy beats.

The album opens up with the mellow “A Place In the Sun.” Bless flows effortlessly, making his intricate and complex rhymes seem deceptively simple. The song acknowledges the struggles of living in the hood while looking towards a brighter future:

“Unorthodox pattern of talking, words walking
At a rapid pace chasing greatness now I face
Cheering crowds, replacing troubled men with scowls
In plain view ghetto youths tumbling dotted cubes
Observing the madness as I cruise
We choose to hide internal bruises so healing is impossible
Tackling the obstacles of embracing our brethren
Loving our women and leading our impressionable children
‘Til then destruction swallows us whole
Bad odds at birth like born on parole
Unable to compete, CD of life stuck on repeat
Moving with the awkwardness of shackled feet
I build with men who grew up fatherless
On stoops we gathered and shared laughter like the shit had never bothered us
We’ve gotten over it, the imperial vocalist
Sharing a few, giving my view, quote me on it”

Bless 1’s positivity is relentless, but firmly grounded in reality. On track after track, he remains aware of the hardships of life, but intent on moving forward rather than admitting defeat. His philosophy is summed up on the track “Never Give Up,” and by the upbeat beats provided by French producer Rhythm From Art. The beats reference jazz, soul, and old school hip hop. The whole album has a mellow groove that it maintains throughout. None of this is going to blow out your speakers, but the beats are consistently good.

As the title of the album suggests, Bless 1 is not one to flaunt his jewels and cars. I’m not opposed to rappers flossing, but it’s refreshing to hear an MC who is upfront about having financial difficulties. Living vicariously through Lil’ Wayne’s ice is well and good, but the majority of hip hop listeners (and humans in general) live closer to Bless 1’s income bracket. Bless offers an insightful examination of poverty and the hunger for money on “The Hunger”:

“They say the goons carry heavy in June
Making the block boil like a heroine spoon
Chi-town where the winters are cold as Siberia
It takes more than inches of snow to cool the temperature
Stuffing our face, never thought about grace
Sounds great if you’ve already ate, but we can’t relate
Taught by police, thieves and ministers
Praise the dollar and chase it in ways sinister
Deep speeches are lost without a listener
It’s hard to open ears of the deaf in my perimeter
‘Cuz a stomach that growls is more powerfully loud
Than the voice calming it down
And you ain’t gotta live in the Chi to understand the schematics
Bred havoc here for a long while
Influencing my peers and then they start to clown
Run streets until we can’t keep up, passing the crown
Off to the youth, suited with flames in their eyes now
But it can never be drowned as long as our stomach pounds with the hunger”

As good as “Starving Artist” is, it isn’t flawless. “Return to the Source” with its alto sax is too Kenny G for my tastes, and sees Bless 1 veering from inspirational to cheesy. Also, at ten tracks and 28 minutes, “Starving Artist” is practically an EP by hip hop standards. I was definitely left wanting more. Those minor complaints aside, “Starving Artist” is great album by a remarkably good MC. The next time you hear someone complain about negativity in hip hop, tell them to shut up and listen to Bless 1.