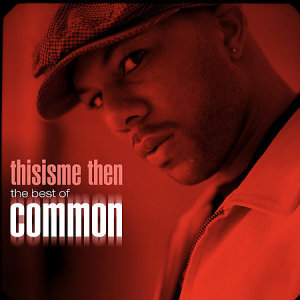 Common :: Thisisme Then: The Best of Common

“Greatest Hits” or “Best Of” albums are always a highly mixed bag. Big fans of the artist represented on such an album invariably already own everything on the disc. If you’re not a big fan of the artist what would entice you to buy a “Best Of” in the first place? Record labels often try to compensate for this by throwing the public a bone, putting one or two unreleased tracks on the album or some obscure soundtrack cuts. It’s a good marketing gimmick but invariably this also invites the wrath of the fans for two reasons – they feel insulted having to buy a whole album just to get two songs OR they feel the wrong “rare tracks” were included and the album is a huge failure. Even the label or artist which can tiptoe their way through this minefield often finds that a “Best Of” album is the deathknell of a career, particularly in hip-hop music. What did Shaquille O’Neal or the Fu-Schnickens do musically after their “Greatest Hits” albums? Exactly.

Fortunately this is not likely to be a problem for Common, the Grammy Award winning rapper who brought Chicago hip-hop soul to the masses. Despite many attempts to pigeonhole his sound with words likeunderground, backpacker and neo-soul Common’s music has consistently been shown to have a broad appeal beyond such limiting categories. As with many other rappers who have experienced mainstream success and critical acclaim, Common has begun to dabble in the Hollywood world and can now be seen in flicks like “Smokin’ Aces” and “American Gangster.” Even as he dealt with potshots lobbed his way for endorsment deals with Lincoln Navigator and The Gap, Common released 2007’s “Finding Forever.” Making commercials and movies didn’t derail his rap career – if anything the transition seemed to reaffirm his relationship with hip-hop, resulting in one of the strongest albums in his catalogue. “Thisisme Then: The Best of Common” is certainly not proof that he’s going anywhere.

With all that being said, “Thisisme Then” is one of the most predictable, paint-by-the-numbers “Best Of” albums that I’ve ever had the pleasure to listen to. PLEASURE is not sarcastic in this case simply because the strength of Common’s catalogue would result in quality listening no matter how a “Best Of” was put together. Nevertheless if one were to draw a straight line through his career from 1992’s “Can I Borrow a Dollar?” to 1997’s “One Day It’ll All Make Sense” and draw the same line from track 1 through track 15 of this CD, they would parallel perfectly. The first five songs are from his first album, the next four are from his second, the next five are from his third. Perfectly parallel, completely uncreative. “Soul by the Pound” and “I Used to Love H.E.R.” haven’t lost any of their luster in the process – the songs are just as good here and now as they ever were. The problem here is that the more perceptive one is the more pointless this exercise seems to be. The selector for this album played it safer than young Zaphod, picking all of the songs released as singles and little other than the ostensible title track “Thisisme” that really illustrate who Common IS. It’s in the nooks and the crannies of his catalogue that the broadness of the Chicago native’s career emerges – quirky tracks like “Two Scoops of Raisins,” lyrical and musical mind-expanders like “Watermelon” and “Communism,” and aggressively energetic tracks like “Real Nigga Quotes.” This album would have been more rightly called “All His Hits and Some Other Shit in Chronological Order.” The SOUL of Common is not found here.

This compilation’s idea of throwing you a bone is to include “High Expectations” from the “Soul in the Hole” soundtrack. This seems like situational irony to me – I had higher expectations from this compilation than the producers were able to deliver. Including a few more obscure but vital tracks from his catalogue like “The Bitch in Yoo” or the slamming remixes of “Soul by the Pound” and “Resurrection” would have at least been a step in the right direction. Ultimately the album would still suffer from being derailed in the year 1997, presumably because that was when his relationship with Relativity ended, and everything appearing here is from their catalogue. Common has had a lot of songs in the ten years since that are definitely among the “Best Of” his career, but you won’t find them here. It’s hard to see this album as anything other than a cold and calculated attempt to cash in on his increasing mainstream fame. THAT BEING SAID if you were not familiar with Common before 1997 and wanted to catch up on his early catalogue this album would be a great primer, and songs like “Retrospect for Life” and “G.O.D.” never get old. Therefore “Thisisme Then: The Best of Common” has a very unique distinction in the long history of reviews on this website, as this is an album which is as thoroughly disappointing as it is enjoyable.