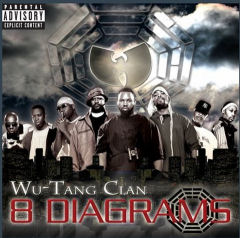 It’s inevitable that every Wu-Tang release will be compared to “36 Chambers,” one of the greatest albums to be released in any genre. Even comparisons to “Wu-Tang Forever” or any number of classic solo albums are daunting. Albums like “The W” and “Iron Flag” have been shunned by fans, not because they’re bad albums, but because they simply don’t reach the same plateau of their earlier records.

“8 Diagrams” strikes a balance: while not possessing the effortless greatness of their first two records, it shows a sense of purpose and direction not seen in their last two. This new focus is most apparent in RZA’s production. For the first time in years, RZA’s beats no longer sound canned from adhering to the Wu-Tang formulas he created. Here, he’s picked an entirely new direction, substituting his trademark energy for a sound that’s much graver.

The primary problem many people will have with this album is that this is the Wu at 35 and not 20. It would be unrealistic for them to emulate their sound of 15 years ago, and they make no attempt at it. Instead, the music here is reflective of a musical maturity that has been constantly developing over the past 15 years. He’s able to seamlessly flip between the moody banger, “Gun Will Go,” to the ’97 throwback of “Wolves” and into the soft soul of “The Heart Gently Weeps.” The biggest problem that the production has is that it sometimes flirts with the line between somber and boring, which definitely separates the “8 Diagrams” from the upper echelon of Wu releases.

On the other hand, despite the dissent from members like Raekwon and Ghostface over the RZA’s musical direction, the whole Clan sounds supremely comfortable with it. From the moment the spooky bass line of “Campfire” slithers onto your speakers, every member is in top form, hungry as ever. Raekwon and Method Man especially came with every ounce of their skill on this album, as seen when they rhyme back to back over “Gun Will Go”:

Raekwon: “On a real note, you’s a waste
It’s right here for you â€“ I will lace you
Rip you and brace you â€“ put a nice W on your face
Word to mother, you could get chased
It’s nothing to taste blood on a thug if he got to go
All I know is that we be giving grapes”

Method Man: “This is Poverty Island, these animals don’t run
Slums where the ambulance don’t come
Who got the best bass?
Fiends waiting to smoke some, approach son
Ask him where he getting that coke from
My dudes hug blocks like samurai shogun
‘Cause no weed and no ones, equal to no fun”

Adding to the somber note of the album is the knowledge that it is the first Wu-Tang album since the death of Ol’ Dirty Bastard. His name appears across the album, with skits of his voice running right along with the usual kung-fu flick samples. Most thrilling is “16th Chamber,” a leftover from the early 90’s that recalls just how great the ODB was. More in keeping with the tone of the album is the tribute of “Life Changes,” which features nearly every member of the Clan giving a short tribute to him. Though all of them are great, and avoid the sappiness that could have pervaded this song, the GZA’s verse is the most moving:

“I became weak when I heard his body expired
It was hard for me to believe my brother retired
Suddenly the clock stopped and the room started spinning
How can he walk off the field during the first inning?
I cried like a baby on the way to his place of death
Hate not being there the moments before he left
Now I’m in the booth, ten feet from where he lay dead
I think about him on this song and what he might have said”

Throughout the album, it’s clear that nobody in the Clan is coming half-hearted with this. While Method Man especially stands out here, every member is near the top of his game. The versatility that makes the Wu so unique is present, whether it’s Ghostface completely changing the dynamic of every song he’s on or Masta Killa’s threatening monotone making every song he’s on seem darker. But even though the versatility is there, the chemistry isn’t on the level it has been.

This leads us back to the primary flaw with “8 Diagrams.” It’s not a bad album, but it’s not the return to rap dominance many fans hoped for. There just nothing here as exciting as “Triumph,” as hard as “Bring da Ruckus,” or as utterly flawless as “C.R.E.A.M.” It’s difficult not to look at this as a disappointment, because the precedent they’ve set for themselves is as high as any group of musicians in any genre.

In the end, “8 Diagrams” is a very good album that is best appreciated when taken out of the shadow of the Clan’s greatest endeavors. It’s a fairly laid-back record that nonetheless showcases the strengths of each member. RZA comes with a landscape that once again stands slightly outside of any specific time frame, and the Clan comes together for its most consistent performance in years. It’s a very good listen for anyone who can accept that this isn’t 1997 anymore.