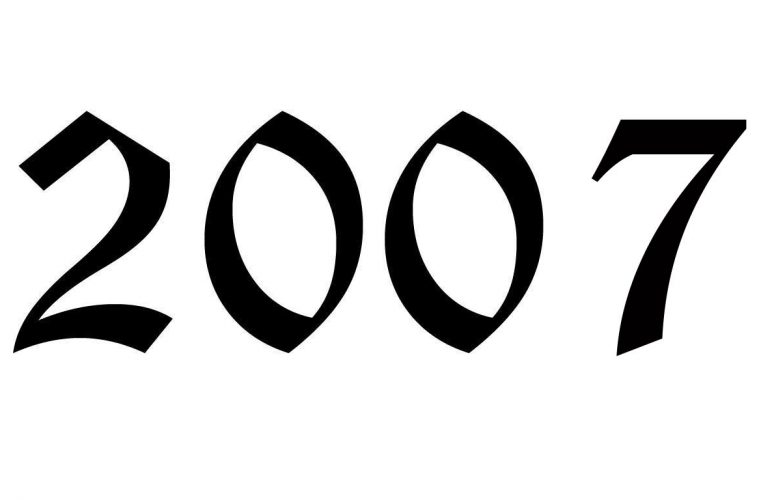 Before I get to my top 10, I have to say that I’m very hopeful about the state of music going into 2008. There were some great releases this year, and the combination of the stagnant record industry and the Imus debacle seem to have reinvigorated hip hop. Hip hop is underdog music, and it is at its best when it has its back against the wall. It got bloated and lazy in the past few years, and the fact that it has gotten kicked in the teeth a few times this year is only going to help it stay lean and hungry.

What follows isn’t so much a “Best Of” list. Instead, I’m rating these based on what I actually listened to. A lot of albums came my way this year, and a lot of them were good. Here are 10 that actually had the staying power to remain in rotation on my cd player or iPod.

10. Mos Def: “True Magic.” This disc snuck in right at the start of the New Year, and was an admittedly half-assed affair. I’m pretty sure Mos dropped this just to get out of his label deal with Geffen. There was no artwork, it was full of covers, and on a lot of the tracks Mos mumbled rather than rapped. Still, as half-assed as “Tru3 Magic” is, I can’t stop listening to it. Even when he’s not really trying, Mos Def still kills it, bridging hip hop, soul, and funk effortlessly. From his reworking of “Liquid Swords” on “Crime and Medicine,” to the bedroom soul of “Undeniable,” Mos delivers the goods half asleep and with one hand tied behind his back. I can’t say that “Tru3 Magic” is a great album, but I also can’t stop listening to it.

9. Citizens of Sleep: “Sometimes I Just Can’t Get Outraged Over Copyright Law.” The best discovery I made as a writer at Rap Reviews was Citizens of Sleep, aka Baraka Noel and the Pineapple Liberation Front. They meld intelligent and thoughtful lyrics with interesting and banging beats. My favorite track on this album is “By Your Side,” which samples freak folk duo CocoRosie. The album is available free at www. Barakanoel.com, so you have no reason not to check it out.

7. Pharoahe Monch: “Desire.” Pharoahe brings the pain on his second solo outing, melding dope beats, righteous anger, and sharp lyricism. His cover of “Welcome To The Terrordome” is one of my favorite songs of the year.

6. Little Brother: “Getback.” This NC duo do just fine without producer/3rd member 9th Wonder. They pay homage to EPMD on the cover, and deal with stardom, label drama, and clothes shopping.

5. Akir: “Legacy.” Technically a reissue, “Legacy” is a great album by a rapper who is the second coming of Nas. With its raw New York sound and New York lyrics, Akir points hip hop in the direction it should be going, drawing a direct line from the Last Poets to Nas to the future.

4. (Tie) Oh No “Dr. No’s Oxperiment” / Madlib: “The Beat Konducta in India.” The Jackson brothers unleashed two great instrumental albums this summer, cementing Stone’s Throw reputation as the label for avant garde hip hop production. Oh No mixes up Mediterranean psychedelic music for a pastiche that is trippy, funky, and banging. Madlib turns Bollywood inside out on his disc, getting even weirder and more out there than he did on the first Beat Konducta disc. I can’t wait to hear some of the Stone’s Throw stable rhyming over these beats.

3. J Dilla: “Ruff Draft.” This reissue of Dilla’s “Ruff Draft” EP is short but essential. From the psychadelic “Nothing Like This” to the gutter stomp of “The $,” “Ruff Draft” is banging and brilliant.

2. Jay-Z: “American Gangster.” Jay returns to his Reasonable Doubt days and kills it on tracks like “Roc Boys” and “Hello Brooklyn.” He even lays out his boredom with wealth on “Success,” noting “I used to give a fuck/now I give a fuck less/what do I think of success? It sucks.” When Jay-Z is on point, there are few rappers who can match him. The production is dripping with seventies soul, and is the first great work P. Diddy has done since “Ready to Die.”

1. M.I.A.: “Kala.” Simply put, “Kala” is a party on wax. It’s raucous, celebratory, and mixes hip hop, electronica, and world beats into an irresistible pastiche. She gives nods to African beats, favela bounce, aboriginal hip hop, Bollywood, and old school indie rock acts like the Pixies and Modern Lovers. The result is a product that is truly global, and as fun as it is important. My favorite track is “Paper Planes,” which uses a riff from “Straight to Hell” by the Clash. The original was a beautifully sad song in written by a white man (Joe Strummer, R.I.P.) about the plight of immigrants around the world. “Paper Planes” flips it on its ear, turning it into a song by an immigrant that is both joyful and menacing, happy-go-lucky rhymes punctuated by gunshots.

UGK – “Underground Kingz.” I’m not a huge fan of Southern hip hop, but “Underground Kingz” is a masterpiece of the genre, mixing skittering drums, syrupy soul, and Bun B and Pimp C’s lazy drawls. It’s a shame that Pimp C passed so young, but at least he left a solid legacy behind.

Lil’ Wayne – “The Leak.” This was one of several mixtapes that came out featuring leaked tracks from “The Carter III.” Lil’ Wayne’s throwaways are better than most rappers’ a-list material, and songs like “Zoo” and “I Feel Like Dying” were some of my favorites of the year. No one can toss off a one-liner like Lil’ Wayne, and even when he’s half asleep he’s killing it. I can’t wait for him to actually drop a proper album. And Wayne, lay off the syrup – that shit’ll kill ya!

Wu-Tang Clan – “8 Diagrams.” If some of the raps on here sound phoned in, it’s probably because they were. I think most of the Clan were working remotely on this effort, and it sounds unfocused and uncohesive as a result. Even the levels on the vocals are uneven. However, RZAs gloomy, trippy production makes it worth listening to. It’s probably the last Wu album in a long, long while, and its sales are sure to disappoint, but it’s brilliant in its own weird way.

Best of the Underground

During my six months as a reviewer for this publication, I’ve come to appreciate just how large and vibrant the underground hip hop scene is. For every release that gets a lot of press, there are twenty others that come out on smaller labels, and a lot of these are as good or better than what the majors are putting out. One of RapReviews biggest services to the hip hop community is giving these lesser-known releases equal air time, and hopefully turning readers on to some great music they might have slept on. Akir and Citizens of Sleep made it into my top ten, but some of other great indpendent releases that came my way were:

Wale – His “100 Miles and Running Mixtape” was amazing, mixing go-go, indie rock, and classic breaks. He has an album dropping in early 2008, and he is set to blow up.

Guilty Simpson – The dirtiest, grimiest, scariest member of the Stone’s Throw crew is also one of their better MCs. The Detroit rapper’s debut is coming out in the first quarter of 2008.