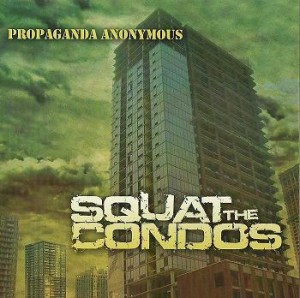 Prop is a long time member of the Adam B about a review of his solo CD. Never let it be said that who you know doesn’t get you a foot in the door. Of course if Adam hit me with a hundred different artists who all wanted coverage it would be somewhat meaningless, but on those occasions he brings someone to to RR like Homeboy Sandman or Top $ Raz they tend to stand out – a signal reaching out through the sheer amount of noise from so many projects. As such I agreed to add “Squat the Condos” to our to-do list.

A couple of weeks later I expected someone would have jumped at the chance to review Prop Anon’s “Squat the Condos,” but it seems I’ve beaten the rest of the staff to the punch on this one. Sorry team! Why did I beat them to it though? Well aside from Adam introducing me to Prop, Prop’s pitch struck me as rather unique amongst the ones I normally receive. “The album itself is an artistic response to our current economic situation in the US and the housing issues that goes with that. Hence ‘Squat the Condos’ – the Condos are all the Luxury Condos that are up everywhere that no one can afford to live in. The sound of the album is fairly hard and aggro, and I think is good to listen to while doing some heavy lifting, haha.” On two levels that’s intriguing. First I can’t remember when anyone described an album as “good to lift weights to” although I can see that description as equally fitting for just about any M.O.P. or Lil Jon album. Secondly Prop Anon’s proposal is quite revolutionary in the modern U.S. and some might even describe it as communistic – the assets of the wealthy should be seized by the proletariat and distributed to the masses for their benefit. Or maybe not so revolutionary when you think about it – “squatters” have always taken unoccupied and unused dwellings for their own since man first started living in organized communities. In some countries squatters have even attained a measure of legal recognition in recent history, getting legal claim on a property through having taken up residence there so long they become de facto owners – a variation of “possession is 9/10ths of the law.”

Such a strategy is unlikely to be effective in the United States, where property owners often enjoy rights which extend beyond death to the grave, with their estates inheriting land or passing it on to their children or relatives. It’s even less likely to be effective in the case of luxury condos, as the very fact of them being “luxury” means they are owned by wealthy developers likely to screen potential tenants very carefully and hire private security to keep the “riff-raff” out. Even if a squatter could pull off a con for long enough to get past a rental agent (perhaps a shower at the Y and a decently fitting suit from the thrift store) they’d be stopped at the point where someone asked for a credit check or a security deposit. The only way to “Squat the Condos” in any practical sense would be at the barrel of a gun, bullying your way to an unoccupied high rise and taking space by force. Even assuming you could pull off this audacious and daring tactic, large numbers of heavily armed police officers would be there quickly to haul you out long before you could hang your shingle and call it home. Squatters usually succeed by taking the UNDESIRABLE property no one wants such as abandoned warehouses where the chain of ownership is tenuous (or broken altogether) and the building is in disrepair.

That being said I’ll give Prop Anon his due – this is a short and HEAVY album that’s just as aggressive as his e-mails to me indicated. Clocking in at 9 songs and just under 34 minutes long, there’s not a single track on “Squat the Condos” that isn’t loud, adrenaline fueled, bass heavy and banging. “Learn how to stay alive with a squatter state of mind” shouts Anon on “Agit-Prop,” and perhaps that’s the better idea to get from this noisy album. Instead of trying to literally squat condos, P.A.’s “ten point program” seems more focused on guerilla survival tactics in a world “where the rich get richer and the poor go to jail.” The fanciful idea of taking over unoccupied luxury condos that have gone unsold in today’s economic recession is attention grabbing but it’s far better to have this album wake the sleeping masses up to the factors that go into those condos. Why do housing projects get razed for the sake of gentrification? Why do downtowns in major cities “revitalize” at the expense of the immigrants and minority populations that have historically called them home? “Brick by brick, wall by wall, we’re gonna see what grows when the city falls.” P.A.’s alert to the unaware rings true to the revolutionary agenda advocated by Immortal Technique and Zack de la Rocha. The only downside of “Squat the Condos” is that the dub-step, techno and industrial sound of his album may simply be TOO heavy to reach as many people as he wants. I’m not opposed to industrial or techno since I’ve covered them as hip-hop related genres (“akin to blood related so you can call us cousins”) but there are a lot of rap fans who just won’t be down with the “Squat the Condos” sound. Regardless I applaud the effort and the message just for getting people to think.