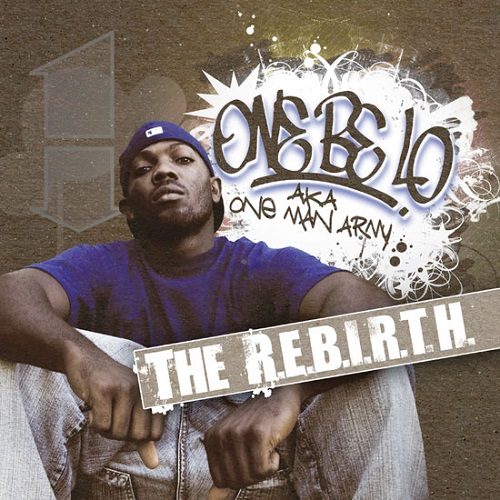 “Real Emcees Bring Intelligent Rhymes To Hip Hop.” It’s not just the title of his album, it’s a manifesto for the artist formerly known as the One Many Army. Every line that One.Be.Lo spits sounds like its been carefully crafted and considered, as if it might be the last he’ll ever spit. Since his days with Senim Silla in Binary Star, One.Be.Lo has always been considered one of the most talented lyricists in the game, his verses dense with wordplay, rhymes, and spirituality. From the first song, “R.E.B.I.R.T.H.” only reaffirms this:

“Now, the business is all about dollars and stacks
Those two words together need a balancing act
‘Cause sometimes, your artist decisions is bad business
And other times, thinking dollars is senseless
For instance, back then, you could get in for dimes
I had it mapped out, God had a different design”

The first thing fans of his will notice is that “R.E.B.I.R.T.H.” sounds harder than most of his other music. As much as for lyrics, One.Be.Lo is known for picking light, airy beats to rhyme over. Here, the beats are just as spare, but the bass is noticeably higher, especially on stereo systems. It works well, giving the album a swagger that complements both the light-hearted and dark moments. There’s not much sound-wise that will blow anybody away, but that’s probably for the best, as it puts the spotlight on the raps, right where it belongs.

What separates One.Be.Lo from many so-called “conscious” rappers is that he never comes off pretentious or preachy. He’s able to question many of the things we accept about life, and many times even provide his answer, in such a conversational way that it isn’t overbearing at all. He lays out scenarios as problems to solve and gives his own solutions, but admits that even his own solutions have problems, and that he may not be right. Most complicated of these is “War,” which offers his own take on snitching, and the conflict between “doing right” with a prejudiced police force and protecting your family.

Even better, his technique never suffers. No matter the topic, the verses are packed with wordplay, rhyme patterns, and metaphors. One.Be.Lo isn’t just a good rapper, he’s a great writer, and this makes him a pleasure to listen to. He has the skill to write lines that sound good in and of themselves, which holds his music up to repeated listens. His narratives are also infused with a strong sense of faith, which gives them a sense of cosmic significance.

Where “R.E.B.I.R.T.H.” suffers is when the beats and choruses fail to be interesting. While they’re harder than most of what One.Be.Lo has had previously, they’re not necessarily better. Some of them are too simple, or just don’t sound all that great. More than that, One.Be.Lo isn’t good at writing hooks at all, and songs like “Snap Shot” have their momentum snapped just because the hook stalls the song. Still, when everything comes together, as on the saxophone-laced “Gray,” the results are spectacular:

“See, knowledge is the key, and the truth shall set you free
But it’s so hard to take off the cuffs
When the laws of the land don’t scrape off the scum-
-bags, bum politicians waste all the funds
Schools don’t teach, so the play ground is love
‘Til a straight blow make a soul take off above
His momma dressed in black, she make all the fuss
He coulda been the next MJ off the jump
Hang out the tongue, free throw, take off and dunk
The newspaper say, “All For What”?
The Police was looking for witness, but they all was dumb
Nobody wanna corroborate, not with thugs
They use us to make all the bucks
Then toss the hero, silence the dogs, and make off with lunch”

As usual, One.Be.Lo ends up a couple beats short of making a truly great album here. That doesn’t mean that it’s bad musically, just nothing special. It certainly doesn’t take away from how great One.Be.Lo is as a rapper, and anybody with an interest in great lyricism would be well served to get “R.E.B.I.R.T.H.” It’s not the easiest album to get into, but it’s one that only gets better with time.