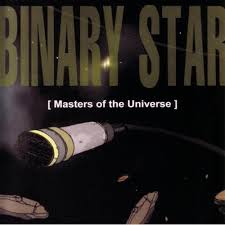 Masters of the Universe

Binary Star :: Masters of the Universe

Are Binary Star on some next shit? Even the bio on their label’s website warns you that “to fully appreciate Binary you can’t just listen, you have to study.” Damn. Is this album going to blow up if people have to approach it like taking a chemistry exam?

It would be unfortunate if it doesn’t – this album represents everything that’s right about underground hip-hop. Binary Star is comprised mainly of two MC’s – Senim Silla and the constantly morphing madman loosely known as “The Anonymous” who goes by various names such as Mr. Hide, OneBeLo, and more. Like their dope tracks, the next move is completely unpredictable but almost inevitably dope.

For those people who heard Binary Star’s last underground album “Waterworld” most of these tracks will already be familiar. The “Binary Shuffle” is amusing both in it’s introduction, it’s chorus (“Do we talk about the money we got? OHH NO! Talk about the people we shot? OHH NO!”) and Silla’s playfully braggadocious raps.

“Silla is a dog at this – the rap Cujo
Half of the star-spanglin dynamic duo
You may not know me now but, you will later
My crew bout to blow up – like inflators [..]
Gettin in the mix, don’t even know the recipe
You know my aptitude – ain’t no need for testin me”

There’s lots of good material to salivate over here. The all-star “Fellowship” with D-Compoze and underground Michigan rap crew Athletic Mic League is definitely alladat, as are the also previous released but welcome reinclusions of “New Hip Hop” and the hip-hop stalking anthem “Glen Close.” Yup – it’s about a gwal who just can’t leave Binary Star alone, but you won’t be able to leave this track’s dope piano loop and slamming beat out of your disc changer either. The title track “Masters of the Universe” though is one of those songs you might have to ‘study’ – it’s dope but moves at such a quick tempo you’ll probably have to check it three or four times to get all the rhymes.

My personal favorite track is another re-inclusion from their original “Waterworld” release – the dope duet with D-Compoze called “Indy 500.” A scratchy, popping record break recurs throughout with a superb piano loop that makes this track one of the most simultaneously dirty and clean songs since Wu-Tang Clan introduced us to 36 Chambers almost a decade ago.

“All we need is beats and rhymes to go and spark it
As long as we got the underground yo, we got a market
I don’t need a major to tell me how to run it
cause my goal’s to win the Indy 500″

Superb. When listening to this album, don’t forget to check for the linguistic styles of “Slang Blade”, the thunderous boom bap of the opening track “Reality Check” and the spooky Halloween-esque themes of “Wolfman Jack.” Actually there’s not much to NOT check for here, both old and new. The changing beats of the melodic “I Know Why the Caged Bird Sings” perfectly suits the different verses about the ills of the prison system, the stark and stripped down sound of “Honest Expression” equally appropriate to it’s title. Very few albums that come out are as well conceived or prepared as “Masters of the Universe” – which proves exactly why the title of Binary Star’s national debut is truly apt.