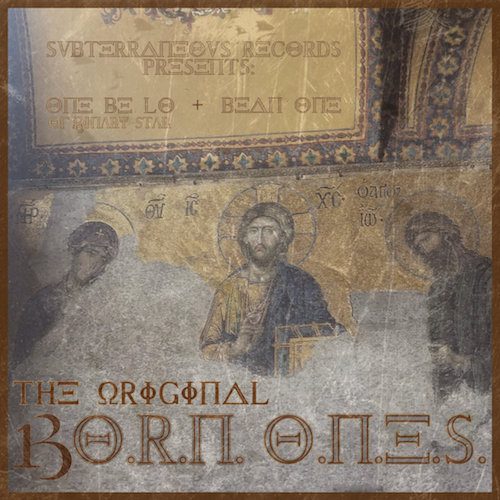 One Be Lo & Bean One :: The Original BORN ONES

I’m hopeful that long time readers of this site are well familiar with Pontiac, Michigan native One Be Lo both for his work as one half of Binary Star and his extensive catalogue of excellent solo albums. If this is your first exposure to him then I’m a little bummed but still hopeful that you’ll walk away with a positive impression. To get you started off on the right note here’s a link to his stream of “The Original BORN ONES” which you can play at your leisure/pleasure while reading what I wrote about the project.

Now then — this album is Pontiac meets Seattle in the best sense. Bean One brings his own vibe to One Be Lo’s highly developed lyrical sensibilities. It’s the kind of natural musical marriage that you stumble across only on the rarest of occasions. I think I’d be overstating it if I told you this was Pete Rock meets C.L. Smooth, or DJ Premier meets Guru, but it might at least be 9th Wonder meets Phonte x Rapper Big Pooh. There’s a very natural chemistry here. Bean One doesn’t steer his friend One Be Lo wrong behind the boards, and in turn One Be Lo brings his skillfully crafted and expertly delivered raps to meet the quality of the beat. The result is genuinely head nodding tracks like “(BORN) To Get Her,” a track that required me to force myself to chill just long enough to keep typing about it.

Before we go any further let’s talk about how One Be Lo unintentionally answered the question I posed about Flint, MI. He’s gone out of his way to pair this album with “Water Guns” t-shirt, and if you buy the deluxe package, 100% of the proceeds go toward grassroots organizations in the city that are working to solve the immediate water crisis and the long term health effects that have already been caused because there wasn’t a cop on the beat watching where the water came from. Even if you just buy the album, anything you pay over $1 will go to the cause. You read that correctly – One is so adamant about this cause that the starting price is ONE DOLLAR. That’s bold, but that’s exactly what I expect from him after a three decade span of his work. One is not half-assed about anything he does.

To be honest not even the most fascinating thing about this album. “The Original BORN ONES” was a project that was started ten years ago. TEN. Although the collaboration here sounds so natural you’d presume it was effortless, it was actually anything but given both artist and producer had other projects they were pursuing, and the album almost went unreleased entirely. One Be Lo found this one on an old hard drive, realized he had uncovered a gem, then decided to “update it for 2016” with some issues relevant to the modern day (Flint obviously) but the dialogue snippets from “Blue Collar” heard on “War is BORN” would have worked then or now. If you’re not used to Richard Pryor in a dramatic role as opposed to a comedy, you may be waiting for him to get to a punchline. What you get instead is a lesson on racial politics that proves not only has the album aged well, the movie sampled (released in 1978) may have aged even better than the tracks. The bottom line on “The Original BORN ONES” is that One Be Lo and Bean One released this album with a powerful purpose, but even if it wasn’t intended to benefit Flint originally, you’d be hard pressed not to spend a dollar on music this damn good.

One Be Lo & Bean One :: The Original BORN ONES
8.5Overall Score
Music8
Lyrics8.5