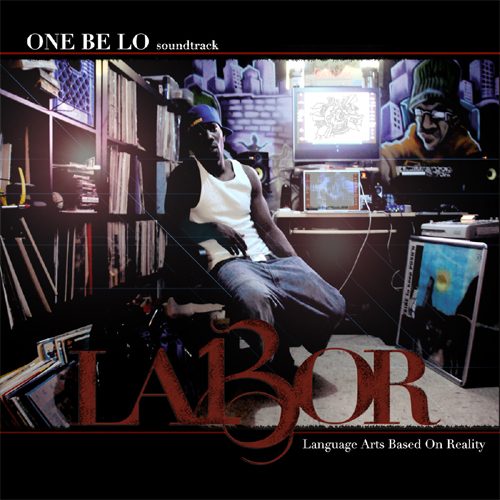 It’s truly hard to believe that it’s been nearly seven years since Michigan’s One.Be.Lo became a critical darling with “S.O.N.O.G.R.A.M.,” his stellar solo debut that only seems to be getting better with age. If I’ve said it once I’ve said it a thousand times, but it’s a crying shame that Lo and his Binary Star buddies Senim Silla and Decompoze aren’t household names, because a more talented, dedicated, and simply amazing crew of hip hop artists is hard to imagine. In the aftermath of “S.O.N.O.G.R.A.M.” Lo seemingly returned to his underground domain, dropping the less-heralded “The R.E.B.I.R.T.H.” in 2008. Although he went over three years between “The R.E.B.I.R.T.H.” and his latest, “L.A.B.O.R.,” he’s hardly been slacking, as evidenced by the countless guest appearances compiled on his recent “Laborhood” mixtapes. Still, it seems hardly right that “L.A.B.O.R.” is such a low-profile release, especially given the quality that lies within.

Something that listeners probably find equally endearing as frustrating about Lo is that he rarely ever stays with one sound even if it earns him overwhelming praise. With each project, he’s moved progressively further from Binary Star’s spaced-out jazz toward a more industrial sound, and the trend continues with “L.A.B.O.R.” “The ANT (i matter)” is laced with punchy, thundering horns, while “Monkey Biz” sports a murky bassline and “Illmatic” vocal sample. As listeners no doubt already expect, Lo is virtually flawless on the mic, challenging conventions and painting verbal pictures with impeccable technical precision as on the poignant “Sheep’s Clothing”:

“Niggas like, ‘Why do police need to chase us?’
Extra, extra, but don’t believe the papers
Bitches get taken and framed and made cases
My life is a gamble, I don’t need to go to Vegas
Your boy like Magic in this Michigan State
I feel the draft out in L.A., but far from a Laker
You wanna talk welfare, you gotta have money
My people want healthcare, we gotta have something
I love this hip hop shit, but far from a dummy
You’re not bakin’ that dough, your stomach get hungry”

“L.A.B.O.R.” is classic Lo, offering his observations of Midwestern poverty and his meditations on everything from the rap game to human nature. Sometimes he’ll throw in a hook, sometimes he won’t. The beats tend to be fairly choppy, often looping a short sample for a repetitive but effective result in that his lyrics are never overpowered. Many of the tracks aren’t particularly memorable on their ownâ€”musically they’re a little too abstractâ€”but assembled together make for an undeniably potent listen. He frequently incorporates obscure vocal bites from films and speeches, enhancing the thoughtful vibe. The early standout is “Doggy-Style-Biscuits,” featuring a gorgeous trumpet, phenomenal percussion, and contagiously relaxing vocals as Lo captures a similar transcendence, first narrating a scene and then lapsing into laidback personal musings. “MEGAchile Pluto” opens with a show-stopping piano cadence, giving way to loud horns and a poignant chorus before Lo clocks in, while “Tiger S t r i p e s” utilizes a rougher guitar and commanding vocal tone.

The tracks on “L.A.B.O.R.” are constructed using the animal metaphors of their titles. “PIGS” is an assessment of police corruption, and “BEEF” discusses multiple manifestations of hunger. The narratives of “Tales from the Hood R.a.t.s.” and the melancholy closer “WILdeBEEST” make for late highlights.

“L.A.B.O.R.” probably won’t be remembered as One.Be.Lo’s magnum opus, but it showcases just about everything that makes him one of hip hop’s great figures: vision, innovation, relevance, consciousness, and true artistry. Lo is the type of rapper that literally will make you stop whatever you’re doing just to absorb his music, and “L.A.B.O.R.” is certainly no exception.