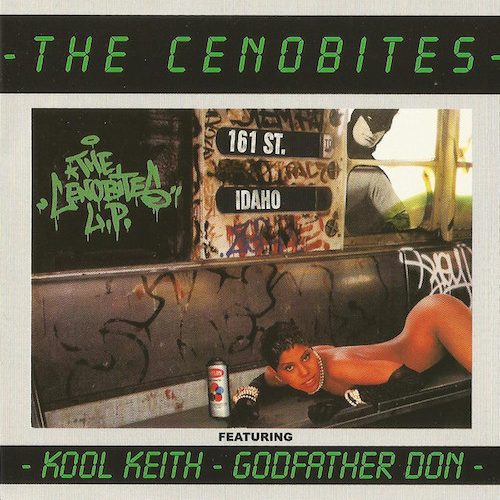 Let’s get something out of the way immediately — there’s no link to buy the Cenobites self-titled album anywhere in the review. It’s been out of print for over three decades now. I suspect this is because of the Hellraiser movies, even though the word “cenobite” originally meant a person of religious devotion. The success of the films changed the little known word and gave it a permanent association with Pinhead’s sadomasochistic acolytes, and in all likelihood it’s the kind of thing Dimension Films and Lionsgate Films would probably litigate over, claiming that “cenobites” are now their intellectual property and that the album’s name would create marketplace confusion.

What makes this more absurd is that the group was originally called The Cenubites when Bobbito Garcia released their debut EP on Fondle ‘Em Records in 1995. It was only over the course of two expanded re-releases (one on vinyl in ’97, and one on CD in 2000) that their name evolved to the more recognizable spelling. It was the inclusion of “How the Fuck You Get a Deal” on various mixtapes that first brought them to my attention, at which point I immediately recognized both Kool Keith and Godfather Don. I had been introduced to the latter on Ultramagnetic M.C.’s “Funk Your Head Up” and to my surprise the two had formed their own group to continue where they left off on “Raise It Up.” You can draw a direct line from that album to this one on songs like “Lex Lugor.”

Keith’s vitriol toward the music industry (and those in it) is also continued on this song. “Take it back to the real shit/real legit/Any rapper on a label should resign and quit!” It’s not surprising then that this came out on Bobbito Garcia’s own indie imprint, since the legendary Stretch Armstrong and Bobbito Show gave Garcia a well-deserved reputation as a champion of underground rap. It’s not a coincidence that the song is named after a pro wrestler and contains pro wrestling references either. The implication is obvious — it’s all fake, but Keith and Don are REAL. Of course if you know Kool Keith’s history of inventing new personas, he’s as much of a pro wrestler as anybody that’s ever been in the game.

The implication here isn’t that Kool Keith is a hypocrite. Keith has long since moved past being anything you want to classify him as or label you want to pigeonhole him with. The 1990’s was the start of Keith constantly inventing and reinventing himself at a moment’s notice, and in that process of evolving he could for a window of time be called a “Cenobite” in partnership with Godfather Don. They may have meant they were religiously devoted to rapping, but I’m sure the always inventive Keith didn’t mind being thought of in the same vein as horror films. That’s certainly the impression you’d get from the intro to “Mommy.”

“Kick a Dope Verse” shows off the Cenobites like minded attitude toward rapping for rap’s sake, with Keith showing off his stream of consciousness flow. He moves from rapping about his ride, to getting released from the hospital, to playing multiple different instruments, to sounding like a stalker and/or serial killer. Bobbito’s guest verse between this madness and Don’s energetic delivery feels normal even though he’s nowhere near the lyricist of the other two. “I write my own shit from finish to start … I eat a knish and then I fart.” Bob, I believe you. It’s charming though, like his freestyled outro to MF DOOM’s classic “Rhymes Like Dimes,” from an album which not coincidentally came out on the same record label.

As the Cenobites themselves continued to evolve and mutate, the album was fleshed out with bonus tracks like “Return to Zero,” which once again showed the relationship between “Funk Your Head Up” and this release. For those who don’t know (and given how obscure both albums now are who would), it’s basically an extended alternate take of the Ultramagnetic M.C.’s track “Checkin’ My Style” with more lyrics from Godfather Don. The quality of the version uploaded to YouTube is a bit rough though, which is sadly the case for a lot of the songs from this release.

Now here’s the conundrum of the Cenobites — it’s a highly desirable album due to the number of Kool Keith fans who want a physical copy, with legit copies routinely being auctioned for hundreds of dollars. It’s not worth it. If there was a modern day re-issue with remastered audio, nice liner notes, and a premium package (say a foil embossed outer sleeve) I’d pay $20-$30 for it at a Record Store Day. I certainly wouldn’t pay ten times that amount. It’s not just the price that’s a factor — it’s the fact that out of all of Kool Keith’s zany escapades, this one is fairly tame and average compared to most. That’s respectable given he can range from brilliant to awful at any given moment, but it’s not as memorable as the highs OR the lows of his career. Even if you’re a dedicated fan some songs like “Rhymes I Sniff” just aren’t ultra necessary or critical to listen to — all puns intended. I suspect that somewhere down the road the rights issues will be resolved and we’ll get one more final definitive version of this album. You can wait until then.