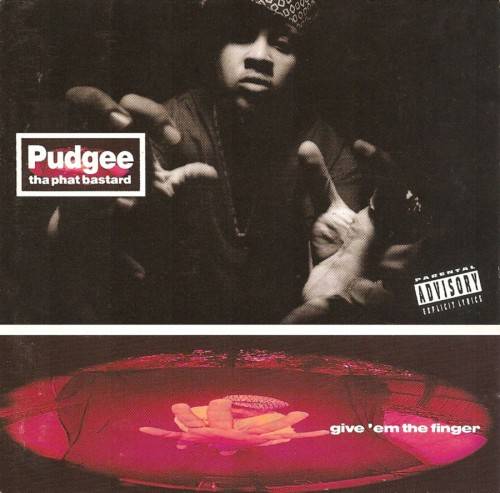 Pudgee’s story may not be known outside the ranks of those who collect obscure rap albums but it’s the same story that can be told for dozens (perhaps even hundreds) of promising rap artists from the 1990’s. Pudgee ran in all the right circles to get on – linking up with Flavor Unit, ghostwriting for Fatal and Roxanne Shante, then finally catching his biggest break by being introduced to Red Hot Lover Lover Tone. Who? We’ll have to go “Back to the Lab” on his album at a later date, but suffice it to say today’s rap fans know him as one half of Poke & Tone a.k.a. Trackmasters. Even back when Tone was still pursuing a rap career he was building up a reputation as a hot producer, and linking up with Tone enabled Pudgee to sign a deal with Giant Records with Trak Masterz (that’s how they spelled it at the time) producing his debut album “Give ‘Em the Finger.” Pudgee’s style is best defined by the title track from said same album:

“And you in jeopardy if there’s a discrepancy yo I’m here
And I’ll be straightenin out problems like Al Sharpton’s hair
I know you laid out a schematic or a plan
but it’s “Gone With the Wind” and frankly my dear I don’t give a damn
Rule number one is that you never ever take a step
without mappin out the step ’til no mistakes are left
Rule number two is that you’re always gonna need your friends
Number three is that your enemies are really friends
I counted three strikes, so I guess that means that you’re out
At least you know NOW what I was tellin you about
I do rehearsal and I’m ready for the drama
because I’m controversial not commercial like Madonna
My words’ll grate a perpetrator like Milli Vanilli
I’m smokin, not front yes I’ll be blunt like a Phillie
People give me much respect cause I’m a rap singer
But if they diss me I give ’em the finger!”

I suppose it’s not that surprising that a man who calls himself “Tha Phat Bastard” would be a rapper with comedic punchlines. Unfortunately despite having the skills to pay the bills and knowing all the right people, Pudgee’s career was derailed by poor promotion and bad record deals. Giant Records went into limbo almost immediately after Pudgee’s record dropped in ’93 after deciding their partner Warner Bros. Records was to blame for poor sales overseas, rather than looking internally to their own failures domestically. Giant tried changing their name and staff but could never recapture their success from the early 1990’s, and Pudgee was long gone by that point anyway. Unfortunately Pudgee’s next label was Perspective Records and they were even more ineffectual than Giant had been. They released several singles for him in 1995 including the original version of “Think Big” which thanks to a guest appearance by Notorious B.I.G. may for all intents and purposes be Pudgee’s most famous song. Unfortunately Perspective never released his sophomore album, which according to a promo CD single I own was to be titled “Niguz Fa Life.” Doesn’t matter what it was called – if it does exist it’s locked up in a record label vault somewhere. Pudgee’s MySpace page details a roller coaster career following his Perspective stint, where it often seems if it weren’t for bad luck Pudgee would not have had any at all. Case in point – Pudgee wrote six songs for Lisa ‘Left Eye’ Lopes’ solo album “Supernova” but the album was never released domestically and to make matters worse she died in a car accident overseas.

The end result is that “Give ‘Em the Finger” is the only official album of Pudgee’s entire career, and listening to the album that’s a rather depressing reality. The one single from the album “Checkin’ Out the Ave.” was a somewhat generic track back in the day but stands the test of time as a fine example of the early 1990’s era of New York rap. Trackmsters provided a horny horn backdrop that was similar to Pete Rock’s steelo, but it’s hard to say they were biting since EVERYBODY was lacing tracks with horn samples in that era. Over the swinging fast-moving beat Pudgee told a cautionary tale about the streets and how they could lead to your demise:

“Livin in the big city, not just New York, every hometown
has a place where things are known for goin down
Where you can learn a lot of things that you shouldn’t know
It’s a place where people tell ya that ya shouldn’t go
All the kids that go dere they end up misled
Cause of a hardhead, some of ’em turn up dead
Mothers cry as they identify their child y’know
In the morgue wearin a tag on their big toe
I’m sayin listen you should go to school and learn
But fast cash and respect is what you wanna earn
So you stand for days and days on the ave
To make enough to get the things that you didn’t have
Gettin five for the vial, some two for seven
But losin out on your childhood’s what you’re really gettin
But if that’s the way you get respect I pity you
Checkin out the avenue”

Pudgee’s skills are not in question anywhere on this album. In fact thanks to his skills and his Trackmasters association guest appearances are frequent on this album, in an era where soloists and groups often went an entire LP with one or none. Kool G. Rap can be heard spitting hardcore verses on “This Is How We… (Fuck it Up),” MC Lyte questions Pudgee until he talks about the “Lady in My Life” (turns out it’s moms – and no not on some perverted shit) and like many a classic early 90’s hip-hop album there’s even a cypher-all-in freestyle track – this one’s called “Doin’ M.C.’s Sum’n Terrible.” My favorite track of all though may be the simply stated but still universally true thought “Life’s a Bitch.” If you thought AZ & Nas were the only one to flip this concept, check out Pudgee’s take on the phrase:

“It never gets any better than the last time
Every night I kneel by my bedside, pray to God and ask why
people do the things they do, offendin you
You make it big and yup, they’re a friend to you
And when you fall on your face it’s real funny
Those pretendin, everything is centered around the money
I’m back to make you think again
Why a dime is a girl’s best friend instead of the men
Probably cause they always need things
See what greed brings? Keep your material things
Life ain’t the only thing round here that’s a bitch..
hehe.. and then you die”

If any man knows a thing or two about life being a bitch, Pudgee is the one. Despite the fact he had all the right connections and all the talent to succeed, Pudgee had one bad break after another… after another… and another after that! At least from his modern day bio it sounds like Pudgee has still found a way to thrive and survive writing for other artists and keeping busy in the music industry; but it’s a shame to the rap game that Pudgee never found his true fame as a soloist. Some may argue though that Pudgee got as far as he was going to in the rap game. Many a punchline rapper had a cult-following in hip-hop during the 1990’s but from Kwest Tha Madd Lad to Big L they all fell to shady music deals or fates even worse than that. For better or worse the music business is designed to throw hundreds of artists at a wall in the hopes even one will stick, so unless you go the independent route to put your material out one album may be all you get. Pudgee was good, arguably better than average, but even if he had been on some Chino XL type next level shit it still would have amounted to a cult following, marginal sales and being cut from a label roster sooner or later. “Give ‘Em the Finger” still sounds good in 2008 but it also represents an era in which many rappers with much more marginal talent got deals to the point even good artists ultimately got swallowed up into obscurity.