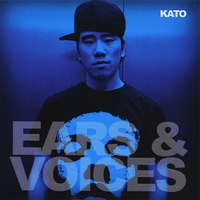 If there’s a rule in getting your album reviewed that persistence pays off, Kato may be proof. Over six weeks ago this rapper sent us a copy of his “Ears & Voices” album. A press release accompanying it noted that he was a Virginia native and nowATL representative, a “highly regarded” rapper since 2006 whose new album was “[his] best work yet.” Of course in this line of work every new rapper is highly regarded and their new album is their best yet but that’s beside the point. Initially I just assigned out the album for review like I always do and thought nothing of it. We get a lot of albums from week to week and much as I’d like to see them all get covered the sheer volume means a few things will slip through the cracks. Kato did. As his own PR and label contact Kato followed up, and to make the situation even more interesting the writer I had assigned “Ears & Voices” to had just recently gone on hiatus for a bit so getting coverage on it was now nearly impossible. Not to be denied, Kato offered to send out a SECOND press kit for review. I have to admit I respect that kind of hustle. If every new rapper, producer or DJ did that every single time it wouldn’t be special but the fact Kato did made me decide to check out the second copy of “Ears & Voices” personally.

If you hadn’t guessed from his name, Kato draws musical inspiration from Bruce Lee’s character from the television series “The Green Hornet.” The opening skit makes sure you don’t miss the point, before moving to a short opening track titled “Big Guns (Move Back).” Lyrically Kato’s vocal tone strikes me as a cross betweenJake Lefco and Jin the Emceee. I suppose it’s worth nothing that Kato’s press release says nothing about his heritage, which is perfectly valid since in 2008 it’s not a top priority in hip-hop. The vocals made me take another look at the cover of “Ears & Voices” though, and through the dark blue tint of the artwork Kato definitely appears to be Asian. When Jin proved to be such a great freestyle and punchline rapper that he was winning battles on BET every week it was assumed by some ignorant cats that he was just a gimmick rapper. I’m not sure why though since hip-hop has been a worldwide phenomenon for some time, not to mention today’s generation of kids descended from immigrants would be fully immersed in American society and rap’s popularity. Kato breaks down his Korean background on “Clones!” but in my mind no explanation is required:

“Callin all small eyed killer MC’s
Open like a storm in a swarm of killer bees
Close down the street, closin your store
Clones bringin heat knockin down your front door
We got the numbers that make your knees quiver
Doin the dance that make ya team shiver
Take a dive in this river of rhyme
Cause I, cross my heart but not ready to die yet
Quick to the frontlines, slow to the back
Riddled with slugs so you’re slow to react
We need a medic but I’m over relaxed
This Korean cat loves collectin the cold facts”

Being self-produced is both a positive and negative for aspiring rappers. It definitely makes it faster to put your project out on the market, since you can do the recording and mixing yourself without having to wait on anybody else. Regardless it’s still a division of time and resources with the potential to have either the beats or the rhymes suffer when neither one can be given 100% undivided attention. Musically Kato does aight, to the point he’s even showcasing production for other artists like A’Leus on “Get it Hot” and Mic Masters on “One Shot.” The sound is the latter is pretty typical of Kato’s work – vocals matched well to instrumental so you can check the flows, melodies that aren’t sample heavy, basslines that aren’t an afterthought and a drum beat that’s crisp and clean. Other aspiring rappers could certainly do worse than to attach Kato to their project. Not satisfied with simply showing off what he can do for himself and others, Kato includes a few remixes like Army of the Pharaohs’ “Black Christmas” to show the scope of what he can do. I’m not hating it.

To be fair though there are parts of Kato’s album which are not entirely original and take on more of the mixtape quality you’d expect from a slimline CD. “Yeah, Yeah, Yeah” jacks KRS-One’s “MC’s Act Like They Don’t Know” in its entirety – you can even hear the same scratches in the hook. Well if you’re going to jack a beat, at least jack a good one, and Kato does. As for Kato’s rhymes the jury is still out on that one. I noted earlier that he SOUNDS like a cross between Jake Lefco and Jin, but I don’t think he’s quite the punchline rapper or storyteller that either of them are. Now don’t get me wrong, nothing on 24 tracks of “Ears & Voices” made me wince and rip the headphones out of my ears, but nothing made me go “AWWW SHIT” like Pharcyde either. Kato strikes me as largely living up to his billing though, which is in itself a miracle in these days of press releases hyping every new act as the next big thing. Whether or not Kato breaks through to the next level remains to be seen but on the strength of his hustle alone he’s got a better chance than most.