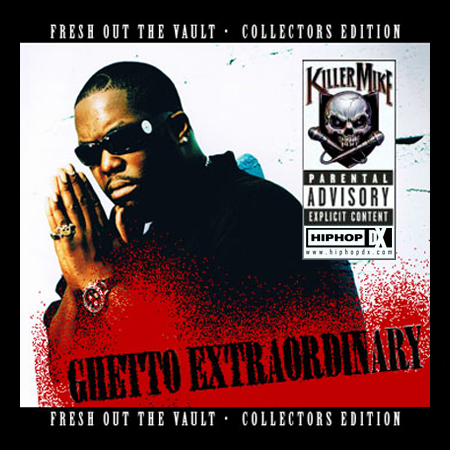 The name Killer Mike is so familiar to me I often take it for granted that he’s an established music veteran. It never even crossed my mind that he might be considered obscure in mainstream pop culture, or that those unfamiliar with him might take a name like “Killer Mike” and associate it with some serial murderer of pop culture lore like Ted Bundy. Michael Render may enjoy scaring people a little though given he named his debut album “Monster.” Big Rube’s introduction on that CD erases any chance of confusion though by stating that Mike is only a “Monster” because society seperates him from the world at large and not because of any inherently evil tendencies. That didn’t stop Mike from spitting his lyrical bravado with an uncompromising attitude from his debut onward though, a lyrical style where Mike prophetically claimed he’d “catch a beat runnin like Randy Moss.”

Mike was heavily pushed after debuting with OutKast, causing “Monster” to go gold and even garnering himself a featured spot in the soundtrack for Madden 2004. After that his career stalled out. A planned sophomore album titled “Ghetto Extraordinary” was conceived, created, produced and recorded but the release date kept getting pushed back. It may be that Mike was just too uncompromising, too lyrically acute and perhaps even too scary for the mainstream after all. Then again it may be that Killer Mike is just another victim of Industry Rule #4,080. The fucked up part is that intentionally or not Mike was sabotaged by the very people who put him on. He was signed to Purple Ribbon Records, a label owned and operated by Big Boi from OutKast, but Big Boi got into a dispute with Sony Records and the PR roster suffered as a result. To make matters worse Mike filmed a hot video for the lead single “My Chrome” that got poor distribution due to the fact BET decided some of the content was too lascivious (irony abounds). With no chance of Purple Ribbon putting “Ghetto Extraordinary” out and no mainstream exposure for the first single to boot the album was quite literally dead in the water – no one was going to release it.

No one, that is, except for Killer Mike. The uncompromising Mike had already been putting his material out online, including a well-received mixtape entitled “I Pledge Allegiance to the Grind.” Clearly Mike SHOULD be getting paid for all his hard work, but with no chance of that happening except through hand-to-hand sales out the trunk, Mike opted for a unique but increasingly more common means of self-promotion – give away his entire album for free. By all rights you should have to pay $12.99 in stores or perhaps $9.99 on iTunes to own “Ghetto Extraordinary” but it won’t cost you one red cent. I can understand Mike’s logic on two different fronts though – the first being that it’s better for it to be heard free than not be heard at all, and the second being that giving away a whole album free generates the kind of publicity he needs to sign a much better record label deal. On that basis it’s a pretty savvy move for Killer Mike to make even though it’s not very lucrative in the short term. The only thing left to consider is whether or not the label was right to shelve the album. There are plenty of good free albums out there and plenty of shitty ones too from low calibre rappers just hoping to get noticed, which is why as a general rule I insist artists send us an actual CD. Anyone taking the time to mix and produce an album, prepare artwork, press and shrinkwrap the CD then distribute it at retail is a little more serious about it than someone who gives away all their shit free on MySpace. Killer Mike IS serious, but the only way to see if this album was actually marketable is to give the free download a review. Intensity is immediately evident with the opening track “Get Em Shawty,” produced by and featuring Three 6 Mafia.

Mike: “I been ridin in this bucket on broke too long
Grab that ski-mask and that tu-uh-tone and it’s on
God damn it I’ma get it come hell or high water
Feed my two little boys and young daughter
Think I’m chillin cause OutKast done did it with ten million?
I’ll still a kick do’ your house, tie up your spouse and children
[…]
I be sittin in the bushes of your home
Pissin in a Coke can, waitin, for you to come home
When I kick in the do’, grippin the 44
All you heard was Killer don’t shoot me no mo’!”

Even when Mike intimates violence in his lyrics there’s always a subtle message behind his verbal ferocity; in this case, Mike is unwilling to accept his children living in poverty and hunger even if the means to support them is extra-legal. It’s thought-provoking concepts like that which turn “gangsta rap” into “reality rap” and make Killer Mike more than just another hardcore rapper. Of course even a mediocre rapper can keep it real, but Mike’s voice growls with intensity and his raps on “Bad Day/Worse Day” illustrate a level of dialogue with the pen that intends to reach out through the song and make you truly visualize the fucked up world through his eyes:

“All blacks got is BET
Pardon me, that shit’s owned by MTV
Blacks ain’t got shit, it’s still 1-9-6-6
Cause you can buy a car ain’t shit
Jordan cain’t buy a team, and that nigga got six rings
[…]
Q-Tip’s singin, Dre 3000 actin
God damn, niggaz too good for this rappin
I’m just askin, what the fuck happened?”

An intense delivery and great writtens still ain’t shit without the beats to match, but “Ghetto Extraordinary” definitely had the cream of the crop making the music. Andre 3000 stirred up the pot on the hot “Gonna Go to Ghana,” a track where Killer Mike proclaims such disdain for George W. Bush that he’d rather live in Africa. Organized Noize can be found throughout on songs like “Shot Down,” a rap that’s half “911 Is a Joke” and half “Sound of Da Police.” There are some smoothed out songs too such as the Ron Browz laced “Chose Me” featuring SL Jones & Scar or “Leave This Hood” featuring Jagged Edge – songs that definitely had major crossover potential if the album had been officially released. Mike hasn’t gone soft though, as “Push Back” featuring M.O.P. is one of the hardest hip-hop tracks to ever be locked away by a label without release. Mike even declares his rap here as akin to “fight music like Bone Crusher” although I think you could just as easily compare this song to the hardest songs Kool G Rap or Mobb Deep have ever done.

By the time the “Bad Day/Worse Day” remix featuring Ice Cube comes on at the end it’s not hard to see just how screwed Killer Mike was when this album got shelved indefinitely. To make a long story short this album is worth the time it takes to download even if you had to do it at 300 baud and it took you 3 days or more. There’s a sort of wry statement to be made by having Cube on the finale, as he was in his heyday considered too hardcore and prone to make violent and even misogynistic statements – yet Cube always had a message in the music if you were looking to hear it. The major difference is that Cube found a label who supported him and they each mutually profited from getting his message out there, whereas Mike has already gone gold once before yet can’t seem to find a record label to call home any more. Hopefully that will soon change.