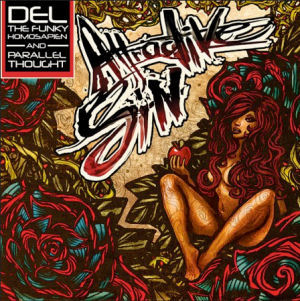 If I could get away with a two sentence review, this would be the first one. The other one would be “This is a brilliant album – go out and buy it when it drops on June 19th.” No? That won’t cut it? Well fuck it then. Let me start out by pointing out this is the lineal successor to the “Parallel Uni-Verses” album from 2009, although this time Del is not collaborating with Tame One. That’s not due to any animosity or ill will that I’m aware of, but if you can attribute it to anything it’s that both artists have multiple irons in the fire right now. Del could even wind up dropping a sequel to “Deltron 3030” album before this one sees an official release. The album I have now sounds done though, and there aren’t even any “for promotional use only” drops on it. (Please don’t ask me to rip you a copy though; it’s watermarked, and I wouldn’t anyway.)

“Attractive Sin” is billed by the one-sheet that came with the promo as “legendary West Coast style” meets “Parallel Thought’s East Coast production.” That’s accurate, but grossly understates the credentials of both artists involved. P Thought is fairly slept on in the industry today – he may not have the big name of Statik Selektah, Alchemist or Primo, but he’s laced beats for some of the most lyrically adept cats in the game. That includes the aforementioned Tame, MF DOOM and C-Rayz Walz just to name a few. And as the producer of record for “Parallel Uni-Verses,” it should already be clear what he’s capable of even if you don’t know his name – his beats would get 4 out of 5 mics in The Source (even back when that hailed a hip-hop classic).

Del the Funky Homosapien’s list of credentials is even longer: founding member of the Hieroglyphics, auteur of a dozen albums, and a man who was still as dope after a eight year hiatus if not more so. His flow is incredibly free form – following a line of a beat but rhyming when and where he wants to do so in a method that only SEEMS random. There doesn’t appear to be any kind of producer he can’t drop a hip-hop classic with, whether it’s the members of his own Hiero fam, his own self-production, or even “virtual bands” like Damon Albarn’s cartoon collaboration with Jamie Hewlett called Gorillaz. More people know the phrase “Dr. Bombay” from his song of the same name than for the TV warlock from Bewitched in the 1960’s. And as rappers come he’s unapologetically ferocious in his “keep-it-true-or-FUCK-YOU” attitude, as exhibited in songs like “1520 Sedgewick” on this album:

“Okay I got some shit to express
Jump off my chest like a skydiver
Right into the fire, won’t perspire
First off, all you half-ass writers, you’re FIRED!
Retired and laid to rest DZL taste this test, nigga you ain’t the best
You imitate straight down to the flesh, style and dress
but can’t get it correct!
Sir DZL, the boy’s a mess
Poison deployed and set
right with the cheese
Then I’m off in the night with a knife up my sleeve
Slicing thieves…”

Imitators and clones should now consider themselves warned. (He informed you thusly.) If that’s not enough notice, consider this – the very first song on the album is “On Momma’s House” and he doesn’t even mention the titleONCE in the song. He doesn’t need to either. It should be patently clear that he takes his life and his hip-hop craft so seriously, that’s what he’d put it on. It’s not just “that’s on my life” or “that’s on everything” when stating what he’d risk – he’s so cocksure he can’t lose he’d put it on his MOMMA. And there’s no reason to believe he will when you listen to him.

“+Life Is Too $hort+ so don’t waste it
Learn to tie your shoelaces before you take steps
Wait just a second to see if it even makes sense
Fake hoes, they choose me but they foolish
First off, ain’t no funds cause it’s few and
far between so you start to see
how dumb fuckin niggaz in cars can be
But fuck it, cause it got to get’cha like gimme
If you’re caught out there, well game is taught there
Not at all fair and that’s fair enough
Cause when I get my fingers on the clutch, eat my dust;
mushrooms, her-on and thizz
hubba rocks, ice, and prescription cannabis”

Del declares himself kin to almost everybody in the course of the song: “Asians, Mexicans, Filipinos, Vietnamese, Japanese, a few white people, Samoans, nerds, jocks, prep stoners/a few niggaz like me gettin they flow on.” Last album around that was Tame One, but this time he’s entirely on his own, and though Tame was an able and capable rapper who could hang bar for bar over Parallel’s beats “Attractive Sin” isn’t less attractive for him not being here. Del seems fired up on every song – because even when he declares that the “Show’s Over” he still comes back for one more track on “Front Like Ya Know,” where he is clearly amused by himself and happy to sing the hook of his own song. Whether as himself or his thinly disguised alter ego Sir DZL, Del is in a world all his own, only needing the smallest amount of help to get you to travel into it. Parallel’s help isn’t small though, it’s LARGE. So like I said at the beginning, “This is a brilliant album – go out and buy it when it drops on June 19th.”