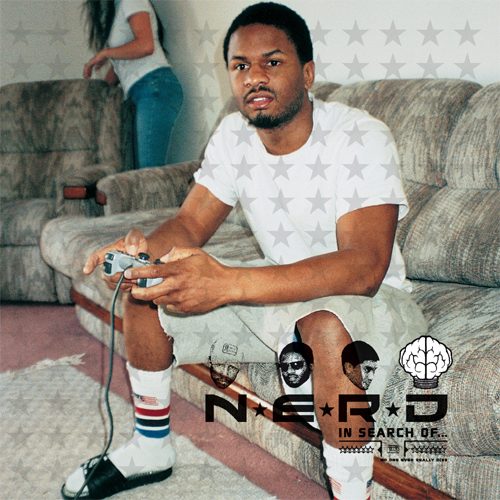 Over the past couple of years, it’s become obvious that the Neptunes have got the Midas touch. With more hits under their belts than most producers can ever hope to achieve in a lifetime, the Neptunes are at the top of their game, showing no signs of stopping. After producing huge hits for the likes of Jay-Z, Ol’ Dirty, Mystikal, Fabolous, Tha Liks, and countless other rap acts, Pharrell Williams and Chad Hugo have even started to branch out into other genres â€“ just ask No Doubt or Miss Britney Spears, for example. At this point, the Neptunes have got absolutely nothing to prove.

So now that we’ve seen them make hits for practically every act under the sun, it started to become obvious that a Neptunes album would eventually pop up. And that’s what we have with “In Search Of…” But I think it’s safe to say that no one expected a Neptunes album to sound quite like this…

Recruiting long-time friend Shay to collaborate with, Chad and Pharrell have chosen to go under the acronym N*E*R*D (it stands for No one Ever Really Dies). And while “In Search Of…” is a definite departure from traditional Neptunes fare, it stands up strong on its own. There’s still plenty of that trademark “Neptunes’ Sound” that Jay-Z spoke of, but with layers of hard-rock guitar riffs and drum beats over top. To be honest, “In Search Of…” really isn’t a rap album at all. But being the hip-hop producing megastars that they are, the Neptunes have more than earned the right to be reviewed by the Real Double-R.

Let’s be straight about one thing though: if you’re one of those individuals who can’t stand the Neptunes (and especially Pharrell’s singing) in the first place, “In Search Of…” will not do much to sway you. They aren’t straying that far from familiar territory.

With “In Search Of…”, the Neptunes haven’t completely changed their sound â€“ they’ve merely built on it. It’s hard to keep in mind that, technically, this isn’t even a Neptunes record. It’s produced by them, yes, but this is a N*E*R*D album after all.

The record gets off to a banging start with “Lapdance” featuring Vita on the hook and newcomer Lee Harvey rhyming. Chances are, if you watch MTV at all, you’ve seen the video â€“ “Lapdance” is the album’s first single. Disappointingly, Harvey’s verse is the only rap you’ll hear on “In Search Of…” This wouldn’t have been disappointing if the Neptunes had fetched a more talented MC to jump things off, but sadly, Lee Harvey just comes across sounding like a MUCH weaker Eminem. Looking past that minor disruption though, “Lapdance” is a very good rock song.

But if you didn’t like “Lapdance” though, chances are you won’t like the rest of the album either. Most of “In Search Of…” is in the same vein as “Lapdance”. In fact, its only competition for best song on the record is “Rock Star” (which, by the way, you may recognize as the theme song from “NFL Fever 2002” for the Xbox). “Rock Star” is the best example to be found here of the Neptunes blending hip-hop with rock. It’s likely to appeal to fans of both genres.

Elsewhere, “Am I High” featuring Malice is appropriately trippy; Pharrell channels Lenny Kravitz on “Run to the Sun”; “Baby Doll” sounds like 70’s AM radio (purely cornball, but intentionally so); and, “Bobby James” is what it would sound like if Queen teamed up with the Neptunes to do a rock ballad about a 17-year-old trying drugs for the first time. One of my personal favorites on the album is “Stay Together”, which sounds like the Neptunes were left in charge of a fucking cracked-out funhouse.

Weaker moments are Pharrell’s ballad, “Provider” and “Tape You”, a song about Pharrell videotaping some girls … exploring each other’s business (gotta keep rapreviews.com a family-oriented site, after all). “Tape You” is just too grimy for its own good, leaving the listener feeling a bit dirty afterward. But then, that was more than likely Pharrell’s intent.

Specifically, the weakest thing about “In Search Of…” is not Pharrell’s questionable singing voice, but his actual lyrics. If this boy was a battle-MC, he would be eaten alive by absolutely any rapper you can think of. But Pharrell is not a rapper â€“ he is a singer. Still, it would have been nice to see him work a little harder on the lyric side of things.

Basically, “In Search Of…” can be officially considered a success. It’s a musical experiment â€“ a joyride for the Neptunes to go crazy on â€“ and it works. It definitely will not appeal to everyone who visits this site, but like they always say, if you like this sort of thing, then “In Search Of…” may just be the sort of thing you like. Me personally? I’d like to see the Neptunes carry this rock mentality over into the tracks they produce for other rap artists. It would be a very nice change of pace, and at the very least, it would shake things up a bit. That’s never bad.