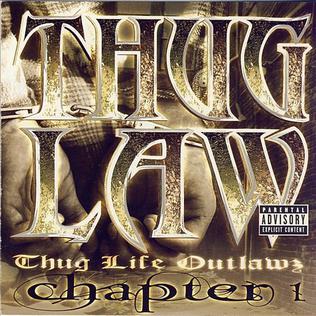 In an ideal world, this disc would feature every Thug Life member and every Outlaw Immortal. But as we all know, this world is far from perfect. Not only were Makaveli and Kadafi murdered in 1996, the chances that bonds in the music biz sustain bad times are so small that, considering all the projects Tupac Shakur has been involved in, by now the Outlawz might easily be a thing of the past like Thug Life, if he were still alive. But cash cows have to be milked, so we get a Thug Life Outlawz album. I admit that the idea itself makes sense. After all, two members of Thug Life, Syke (Moozaliny) and Mopreme (Komani), were in the original line-up of Makaveli’s Outlaw Immortalz. And since one crew evolved (by way of Dramacydal) into the other, it’s only right that they get together to keep the legacy of rap’s bravest soldier alive. But since Big Syke, who’s been trying to do his thing with several solo albums, executive-produces this album, he’s not only all over it, he also brings in a lotta folks that really don’t have nothing to do with either group. That’s why “Thug Law Chapter 1” will most certainly differ from what you would like to imagine. Pac does not appear on this one. There is NO cut that would combine the remaining members of Thug Life, Macadoshis and Rated R, with the Outlawz. There is only one song where they at least join Syke and Mopreme as The Original Thug Life. And only 5 out of 16 tracks reunite Syke and/or Mopreme with any of their fellow Outlawz. The rest is pretty much the executive producer presenting some newcomers.

I was all the more surprised when I found out how banging “Thug Law Chapter 1” is. Musically, this is a lot more satisfying than the latest Outlawz offering “Novakane”. It may not be for the family of crossover fans that Tupac Shakur was able to attract, but all you Pac disciples should pick this one up blindly before you even look at any of these chest-baring bandana-wearing thugs. By now you’ve heard the Outlawz bring it to all those Tupac clones. They do it once again in the opening “What”. Noble can spot the “copy cats / the whole industry tatted up / yeah, I hope the whole industry gatted up / (…) / and you can scream you a thug all you muthafuckin’ want / but you muthafuckas know the nigga you got it from.” But it’s the Outlawz concept as well that has been bitten: “Niggas been barkin’ our shit but steady ridin’ dick / the industry counterfeit, so here’s your fuckin’ click / so fuck a radio, fuck a video,” states Syke. The Outlawz are as relentless as ever. Just watch Noble wrap it up in “Casualtiez of War”: “Fuck friends, but we love all our enemies / at least I know what the fuck they wanna do to me.”

I’m not sure if songs like these are instrumental in bringing about his intention, that “Pac and Yak ain’t died for nothin’,” and Syke is probably right when he ends the song echoing the phrase “we all lose” until the military band conducted by produder Vachik has stopped marching, but you have to admire these soldiers that keep fighting long after their captain has died. The sheer amount of his appearances might lead one to believe that Moozaliny aka Big Syke has risen in the ranks, but I’d merely consider him the host. In fact, the intriguing thing about the Outlawz is that they seem to be led on by their former leader from the beyond. I don’t dispute that this project would have more depth and wealth if Pac were still alive. But he’s there somewhere. You can see it in EDI, when he’s “calling on all thug niggas” to “get this shit back together” in “Who You Trust”. And you can hear him in a young rapper like Kastro who expresses that same existential angst:

“I’m like a bad situation waitin’ to hatch
born alone without a funny bone and honestly trapped
in this hell, plus I ain’t got no one to tell
and trust is like a lion king tuckin’ his tail
I walk a tight rope tipsy, drinkin’ 151
paranoid, destroyed, and only barely 21
My ma, she told me, “Son, you needn’t be so negative
relax, settle your nerves and get a grip”
I rest restless, tumble around in my sheets
like the next second could be the last of me
Don’t nothin’ pass me once that I don’t look at twice
and think that sugar is shit if it look too nice
Suffice to say it, the nights of my life ain’t to play with
The type to slice your heart to a part, ain’t no fake shit
Pretty much, ain’t nothin’ much to discuss
nigga, my life is fucked and I ain’t got nobody to trust”

Napoleon and Noble pop up in “Shit Iz Real” and “Pay Day”, respectively. The former could easily be a Left Coast underground banger with its musically adventurous Big Syke-production. The later is produced by Bay Area veteran Tone Capone and has been a wise choice for a single. Krayzie Bone is on the hook, Mack 10 guest-stars. Other big names on the guest list include Above The Law on the very L.A.-ish “Satellite Niggaz”. Mac Mall and again Tone Capone bring it up to the Bay with the Bonnie & Clyde-type “I Need A”.

Since the Outlawz represent Jersey, you might think this is an exemplary bi-coastal affair. Scratch that, cause “Thug Law Chapter 1” is tri-coastal. The third dimension, you guessed it, comes courtesy of the Third Coast, when Big Syke introduces a group named Swerv. Even though Bay Area producer Femi Ojetunde produces their “Fuck That”, “South Bound” and “Do That”, these cuts have a distinct Dirty South feel to them. To a lesser extent that also goes for Vachik’s “Hood Nigga” and “Angelz Cried”, which also feature the Swerv guys. A bunch of others make up the line-up of “Don’t Make Me”, including Kamillion aka Mel, who is Napoleon’s little brother and comes off like the next candidate to be inducted into the Outlawz ranks. One last newcomer is female rapper Sundae (where is Storm, by the way?), who’s on a couple of songs, including the male/female dispute “No Time”, but that one is really singer Tyme’s triumph. What’s left is the closing “Thug Cycosis” with Thug Life. Rated R sounds rather strange on this one, but it’s Pac’s half brother Mopreme who shall have the last word: “My middle finger is my gang sign / muthafuckas imitatin’ the great, them niggas still tryin’.”