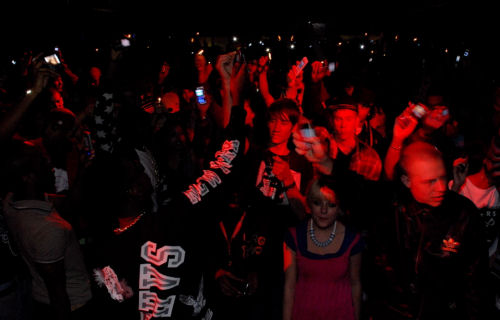 The date: 10th February 2008.
The venue: Cargo, London.
The event: An unforgettable evening in tribute to the late great J Dilla.

If you don’t know who J Dilla is, go and find out RIGHT NOW. It seems pretty unlikely, but I’ve seen smokers live to be 100, so hey, you just might not know that he is one of the most revered hip hop and soul producers of all time. Yes, I am indeed “Jay Soul” – but perhaps that would’ve been the perfect moniker for J Dilla (formerly known as “Jay Dee”), as he is one of the truest embodiments of “soul” that hip hop will ever witness. The care and attention with which he crafted beats reminds me of the concept of “satori” – it is a Japanese term relating to the precise moment at which you pay perfect and full attention to whatever you do. I try to apply satori to my life, but Dilla actually did it in his music. Just listen to how crisp, yet undeniably lush, his beats were. Now try and recreate them. You can’t, can you? That’s the point.

And that is why we came together to pay tribute to a real and true hero of hip hop, whilst also raising money for charity. The J Dilla Foundation and also Lupus UK will gladly receive approximately £4000 of pure love from the crowd that attended on February 10th 2008, exactly two years to the day after James Yancey sadly passed away, following his prolonged battle with ill health. A host of top name DJ’s played for free, including the legendary Shortee Blitz (you can check out what he thought about Dilla in an interview posted last week), Mr. Thing, Harry Love and DJ Spin Doctor – the man who is one of the key driving forces behind the night. I spoke to Spin Doctor a couple of days after the event, and it helped put the evening in context.

To the event itself. I have to admit I was a bit late getting down, casually strolling to Cargo at 8:30pm expecting a few people milling about inside and out. I was wrong. The club was FULL. In fact, that club was full and there was a queue outside that I conservatively estimated to be at least 500 strong. We British know our queues, trust me; there were at least 500 people in it. I almost (but not quite) felt bad about walking straight in, but it was for a greater good. Having missed the first hour and a half, I’m sure that the DJ’s killed it, and was sorry to miss it. Regardless, I caught DJ Lok in the mix, and it set an excellent tone for the evening. Spin Doctor followed, and I was already hooked in before Harry Love and Mr Thing played in tandem. Once Shortee Blitz burst onto stage, the crowd was bouncing off the ceiling – and he barely even spun any tunes, it was Shortee in Busta Rhymes-style hype man mode, as I had never seen him before. He rapped along to 90% of the tunes, kept rewinding tracks, and it seemed a release for him to be surrounded by this crowd. This crowd. I’ve honestly never seen anything like it. The crew at the very front knew virtually all the words to all the songs – Shortee told me later that they are the Aftershock crew, and they shocked the hell out of me. I was standing at the back of the stage, watching the DJ’s at work, the crowd head on – the only way I can adequately describe it was love, pure love. The noise they made, the veritable Benetton ad of multiculturalism, the lack of attitude, and, most importantly for me, the knowledge. Such a large portion of the crowd really knew their shit. It proved, well and truly, that hip hop is alive – the spirit is alive. I was there; I saw it with my own eyes. Songs I never even realised that Dilla had produced – like a sick remix to Busta Rhymes “Woo Hah (I Got You All In Check)” – were almost blowing the speakers at Cargo. The outdoor smoking section was full of people who barely knew each other talking about a guy they never knew – the common bond they shared was passion. Passion for great music. And out of all the tracks that this excellent selection of wonderful DJ’s played, there wasn’t a single dud beat. There were a few songs that the crowd didn’t recognise, but that was OK. Nobody started shuffling their feet: instead they listened, a look adorned their faces as though a new jewel was about to be air-dropped into their lives.

Speaking to Spin Doctor a couple of days after, this affable and down-to-earth DJ that had clearly poured so much heart and soul into helping drive the event forward, I was made aware of certain aspects of the evening. This was the second year that such a tribute night to J Dilla was arranged – and I can imagine next year only being bigger. People flew in from Japan and America for this event, believe it or not – I spoke to them. All the flyers, design and promotion were done for free. And let me make this clear, this wasn’t a ticketed event – you walked in for free, and you could make a donation if you were moved to, or even buy merchandise such as a Dilla t-shirt or poster, perhaps one of his albums. I, for one, am writing this wearing my wicked “Jay Dee” t-shirt. Spin Doctor told me that one guy had someplace else he had to be, but he simply had to come down to give a donation, even if he couldn’t get in.

The track that got a deafening amount of noise – aside from Pharcyde’s “Runnin'” – was actually my personal favourite, the wonderful Common ode to love, “The Light.” Well, the whole tribute night was an ode to love – love for a man and his music. I asked Spin Doctor what Dilla would have made of such an evening. “Humbled, maybe – deeply touched. But I think he would have been overwhelmed.” That makes two of us. Rest In Peace, J.