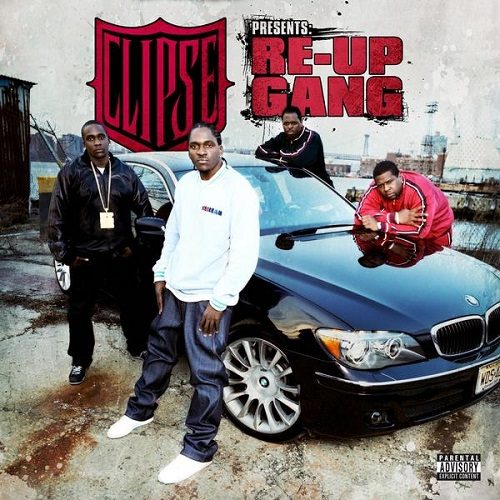 Before “Hell Hath No Fury” dropped eighteen months ago, I’ll admit to have not being particularly bothered about the Clipse. Sure, they had a couple of big singles and “Lord Willin'” was a solid enough international debut, but after such a massive gap I had almost consigned them to the darkest recesses of my mind. What kept them an “almost” was that excellent sequence of “We Got It For Cheap” mixtapes, fleshed out by the other Re-Up Gang members (Ab-Liva and Sandman). I’ve never been an ardent follower of the mixtape industry, but it seemed clear that the Clipse had really stepped their game up, flexing their lyrical muscles with aplomb over many a hi-jacked beat. That made “Hell Hath No Fury” less of a gamble to purchase (which I did, first day) and within a week it became clear to me that it was a bonafide classic to keep in my treasure chest. So now they have jumped labels to Columbia (the perfect name for their drug-fuelled rap), and created their own imprint for official Re-Up Gang albums, with Koch handling their share too. Previously anchored down by the Neptunes and Jive Records, they can now work with anyone and make up for lost time â€“ this Re-Up Gang LP is a real treat for everyone that bumped any of their mixtapes.

This is a concise twelve track outing, with hard beats and harder lyrics â€“ and make no mistake, the focus really is on the words. The consistency of the verses is quite remarkable, with songs like the ruthless “Million Dollar Corner” proving a barrage of relentlessly impressive verbiage. Meshing well with the crazy beat of “Street Money,” they even dare to abandon their regular flows in favour of vocally kicking the shit out of the track. Plus Scott Storch is on hand to drop one of his better recent beats, so that the lads can have some good old-fashioned summertime flossing fun on the instantly catchy “Fast Life” â€“ check this out:

“I do hits for my go-getters, to my O-flippers
All my rose Mo’ sippers
Tell the feds to take more pictures
I stop for the camera, my niggas hold keys/ki’s like janitors
Throw D’s on that bitch, bought her tits like Pamela
Spend a whole day trying to take all my stamina
Never that, still got more for Tamara
Pusha’s sex game no amateur, I come clean
++Jeru Damaged ++ the scene…
Hot summer days, long Vegas nights
We bet it all baby, welcome to the Fast Life…”

The topic matter throughout the album isn’t as diverse as we’re used to, with the Clipse in particular seemingly too relaxed to worry about high-falutin’ concepts â€“ they are obviously enjoying their side-project (and kicking their Biggie flows… oh no he didn’t!). Songs like “Emotionless” are exceptions to the rule, but Ab-Liva in particular is the man to step up and steal the all-round MC show. He really spits FIRE every time he grabs the mic, and plays his part perfectly. I won’t include his opening salvo on “Bring It Back” â€“ simply because viewing it written down couldn’t do it justice. Needless to say, Sandman and Ab-Liva grab their opportunity to shine with both hands, whilst the Clipse are play their usual cocky roles to great effect.

The music is solid rather than stunning, but that allows the MC’s to shine â€“ and make no mistake, this is a real MC’s album. If you’re expecting an album of “Fast Life”-type joints, then keep waiting: this effort is a well-balanced sequence of hard lyrics for fans of hot flows and cold punchlines. It doesn’t feel like a classic (in the way that HHNF clearly was) simply due to the limited ambitions (conceptually and musically), but that doesn’t make it any less essential, especially in today’s relatively barren hip hop landscape. There simply aren’t a lot of albums out there like this, ones that focus on lyrics and flow ABOVE music and choruses. The fact that the latter two are above average anyway is simply a bonus, but this rounds off the “We Got It Up For Cheap” series almost perfectly, keeping in a similar tone and giving the fans what they want. They got it for cheap, whilst we get a treat: in my books, that is a win-win situation.