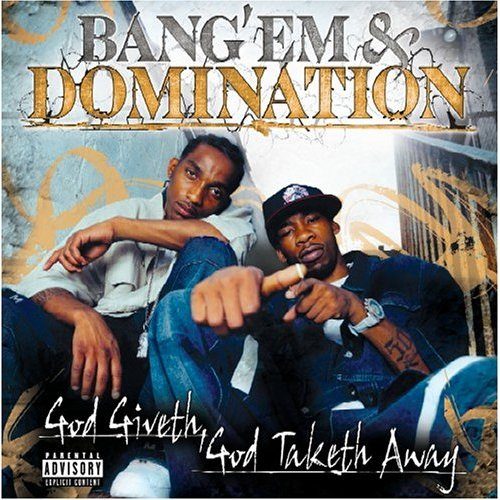 Bang’Em Smurf and Domination have managed to fly under rap’s radar despite what was once a very promising career. Once down with 50 Cent, the duo seemed set for stardom, if only by association. Fast forward a few years and the duo has had a bitter falling out with 50 that has lead to a one-sided beef. Oddly enough, though Bang’Em and Domination probably have the most valid beef with the G-Unit general, they have gone almost unaddressed by 50 or his associates. Unfazed, the group has continued its campaign against 50 with mixtapes and collaborations with other G-Unit foes. Thankfully their official debut on Koch Records doesn’t continue the trend as 50 is addressed on only one record. Given the opportunity to see who Bang’Em and Domination are, aside from 50’s foes, allows the listener to fully assess the duo. While far from a perfect album, “God Giveth, God Taketh Away” shows a lot of potential.

Produced almost entirely by unknown producers, the album still manages to maintain a gritty street vibe throughout. The only recognizable name on the list of producers is The Heatmakerz who come through with a predictable sample and chop job on “Ghetto.” Shatek King provides a soulful backdrop on “I’ll Be Around” as well as a much less effective sinister synth track on “I Can’t Lose.” Get Large Productions schools The Heatmakerz in their own game with the flipped sample on “Misery.” The album actually bounces between these two extremes throughout. The heavily sampled, soulful tracks tend to be the album’s high points, while the synth attempts at gangsta music tend to sound generic. Overall, there are a lot less hits than misses, making for a sub-par effort on the production.

Bang’Em and Domination tend to mimic the production in the sense that the better soulful efforts are matched with heartfelt raps while the generic synth attempts are paired with equally generic street raps. Domination’s letter/dedication to Bang’Em (who is currently locked up) on “I’ll Be Around” is probably the album’s best track both lyrically and musically. Other strong tracks include “Misery” where Domination relates his life on the streets. “We Just Friends” flips things a bit as they address an evolving relationship with the stereotypical “down ass chick,” but is a decent effort. “What Does It Take” is another stand out track addressing women, this time around it serves as a dedication to those women who are mistreated and don’t have the strength to leave the relationship. But despite these songs, Domination and Bang’Em revert to generic and horrible gangsta clichÃ©s too often. “I Can’t Lose,” “Rowdy,” and “Struggle” are examples of horrible tracks that do nothing musically or mentally for the listeners as they are bad attempts at street and club tracks. On top of their failed attempts at gangsta music, at times it is difficult to tell Bang’Em and Domination apart as they both adopt identical flows on most songs.

“God Giveth, God Taketh Away” contains a few songs worth listening, but not enough to redeem the album. While the group definitely shows promise and brutal honesty on some tracks, they spend too much time trying to cement their street reputation. Coupled with suspect production, their gangsta music does nothing to differentiate itself from the hundreds of other similar acts spewing out identical music across the country. Were the group to refine its approach with better production and less stereotypical street banter, they could very well put a decent album together. As it stands, the group seems too focused on proving its street cred to appeal to anyone but hard core fans and possibly a few 50 haters.