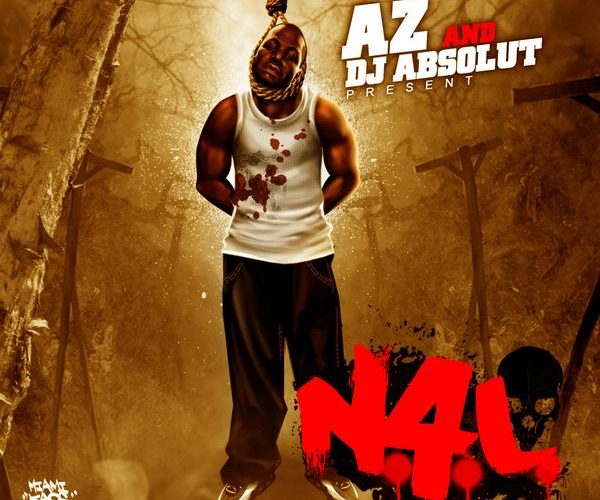 The very idea of “N.4.L.” (shorthand for “Niggaz for Life”) has to be enough to make any AZ fan cringe. Most famous for crafting a guest verse on Nas’ “Life’s a Bitch,” AZ has never been able to escape Nas’ shadow. To this day, AZ can’t give an interview without being asked a question about Nas. So when AZ announced “N.4.L.” as his artistic follow-up to Nas’ then-named “Nigger” album, it only put him deeper within that shadow, which despite helping introduce him, has been a curse ever since. To make an album that is directly indebted to the man seems to send the message that even AZ has yet to move on.

To make it worse, “N.4.L.” is an utter disappointment when viewed in the context of his own career, let alone Nas’. One thing AZ does have a reputation for is constantly dropping solid albums that had glimpses of brilliance. “N.4.L.” puts an end to that tradition on both counts, lacking both the overall quality and occasional genius is AZ’s calling card. Even if this is more an official mixtape than actual album, its flaws are still inexusable for an artist of AZ’s talent.

The main thing this album lacks is an artistic vision. The theme is solid enough – it more or less deals with the concept of the ghetto being a niggerized, or exluded, community, and how AZ views that community with a combination of pride, resentment and ultimately acceptance. However, the approach to this theme is sloppy and poorly executed. AZ seems incapable of any truly poignant ideas, instead regurgitating urban myths and stereotypes. With the exception of “Doe or Die,” he’s never been one to make particularly consistent albums, and that achilles heel is completely exposed as he tries to take on a topic as serious and dense as this one.

Musically, “N.4.L” is only saved from disaster by its mundanity. There’s not a true highlight in the whole collection, and most of the beats only distract from the lyrics – which would be a blessing if the beats weren’t so lackluster. It’s a bad sign when the strongest beat on your album has already been done better twice – “Knowledge Freedom” has been rapped over by Blu and Raekwon, who guests later on the album with a sleepy verse. So while the weaker production, such as the electronic whine of “The Secret,” destroys the album, the better beats don’t come close to redeeming it.

The music isn’t even the biggest fault of the album. Even AZ at his worst, over mediocre beats wouldn’t be but so bad, but the guests here are terrible. Even known names like Raekwon and Sheek Louch underpreform here, and the lesser known rappers like Starkim are mind-numbingly bad. AZ has enough trouble staying on track by himself, the guest rappers take the album to new lows. Even some of the skits ultimately take away from the album. The quotes from movies do well, but 10 minute soliloquies from random people (“Self Savior”) is taking it too far.

Strangely, AZ himself is the least notable aspect of the album. His strength has always lay more with introspection and rhetorical florishes than any political awareness, and that’s still true here. For all of the album’s bold intentions and glaring weaknesses, “N.4.L” is usually strongest when AZ just sticks to what he’s always been good at. Songs like “I’m That Nigga” see AZ going away from his political themes and making better music. That’s not to say he can’t experiment with theme and style, it’s moving away from his artistic strengths in songs like “Nigga Games” that hurts him. “Runaway Slave” sees him performing a slave escape narrative through hip hop, and works well through from both a lyrical and suspenseful side:

“It’s scary, just wanna be free
Got a baby boy, three, don’t want him like me
Please, just let me get across
Know there’s freedom in the North
Like Jesus on the cross died for our sins
I’ll die for my kins, just for the sake to see slavery end
Can’t they see we all men, all being hated for the color of our skin?
It’s hard to translate it, but my brother only 10
Working in the field, got him working for a meal
I’m worshiping still, so please send a sign
I’m just another nigga with his ass on the line
Fine, but you know I’m here trying
Trying to stay alive while everybody dying
Back at the plantation, momma there crying
But I told momma dear not to kid because I’m a lion
I’m lying, I know I’m a nigger
But now I’m a nigger that made it to the river”

When AZ tackles the album’s theme from an individual perspective, it works, but too often he broadens his scope beyond his abilities, and the album suffers from his poor concepts and vague insights. This inconsistency, coupled with a lack of redeeming factors in the music and guests, makes “N.4.L.” the first AZ album that is an all-around failure. It’s always sad to see one of rap’s premier talents drop a dud like this one, but at least from here it can only get better.