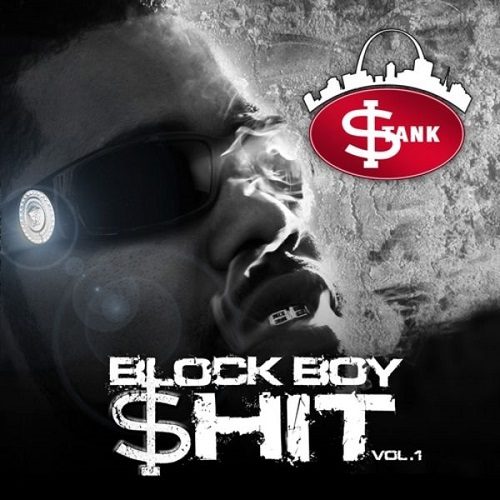 This is supposed to be a precursor to something bigger, much like many non-retail releases of newly signed artists. In Stank’s case, he has recently signed to Vista Music Group/Universal Republic Records and is plotting his grand introduction to the scene. Hailing from East St. Louis, Illinois (or as he calls it â€˜Stank Louis’), he hopes to offer a something fresh without the foul smell of his namesake on wax, but does “Block Boy Shit” really make any profound impact?

The 20 track complimentary disc starts off strongly enough with a thumping, dramatic production in “We Do It 4 The Block,” that is propelled by a fast-paced snare snap. The anthem is perfect for Stank’s style, as he spits his first verse:

“Heyyyy I’m on the block all day like a stop sign
Try coming’ in and out, but you don’t stop mine
Yea your boy is strapped clutching on his glock 9
Test me if you wanna, see if I don’t pop mine
On the ground with a man lying’ down dying
He said he was going to get rich or he would die trying
Look at my eyes nigga, I ain’t lying
Straight gunplay, I’ll be all about that
Play with my money and make me bring it where your house at
It’s no love where the fuck I’m from
I’m from East Saint where the good die young
And if your punk ass snitching then your ass get hung”

The lyrical content is not mind blowing, in fact the rhyme scheme is fairly simplistic, but it is fitting for his predominantly Southern influence. Furthermore, Stank is unrelenting in developing his gangster character throughout which is substantiated with plenty of energy and a confident flow, that sounds somewhere in between what Young Jeezy and Young Buck offer. This is clear on the track in question, as he adlibs like the former, which helps keep things interesting. At the end of the track, an exuberant Stank adamantly argues, “Half y’all nigga’s albums ain’t even sounding like this.” Rather ironically his flaws do not fall on his skill set, rather, the biggest weakness he has is his inability to distinguish himself as something new.

A great majority of the songs are either personal ego boosts (“Fly As Hell”, “Sharp”) or typical fare about hustling in the streets (“Weight Up”, “The Block Put Me On”). He does this just fine, yet naturally there is some expectation for an artist to step out of the comfort zone to talk about something with deeper connotations, which is what he tries to do on “God As My Witness.” This one has a much breezier and rhythmic approach. You would think based on the title that it would be a form of repentance for d’evils that go with grinding. And though there are some heartfelt lines about his brother, who was taken from him and the blessing of being forgiven by this “magical world,” the overall message is another one that simply glorifies drug pushing as an acceptable vocation in the eyes of God. The chorus on “God As My Witness” accentuates the misconceived notion:

“God as my witness I’m going to make me a weight
And hustle hard ’til my people get straight
‘Til that day, I’m on the block trying to stack me some chips
Cuz I’m tired of living broke in this bitch
Okay!”

So the song is ultimately one of the very best on the CD; however, there is an innate problem with it.

Stank tries to lighten things up with little singsong diversions sandwiched as either prologues or epilogues to given tracks. The skits also offer a prime opportunity for Stank to present his humorous side with quips like “Nig-away,” which is a crude commercial version of the conceptual pills first thought up in the 80’s movie “Soul Man.” It is a funny anecdote about a product that turns African Americans into white folks in hours. These additions may seem pointless, but in the grand scheme of things they are quite vital in letting the listener into his personal style.

Sooner than later it becomes evident that the real highlight of the album is the consistent productionâ€”an element that is usually marred by a lack of balance on early works. Too often the labels either try to rack up a large bill with the likes of Just Blaze, or another high-profile producer. Stank wisely enlists the help of a team called the Breakfast Club. Most of the music is brooding, but at the same time moving, much in the way Polow Da Don’s work was on Rich Boy’s debut.

Other than the tiresome subject matter on “Block Boy Shit Vol. 1” the only other notable annoyance is the timidly mixtape structure of it all. Almost all of the standard length tracks are sandwiched between short little seedlings of a song, some of which you want to hear more of, some you could do without altogether. Luckily, on the other hand, there is an extremely minimal DJ presence.

Upon completing a listen of this newly signed artists’ pre-album you may have trouble finding a strong connection with the music. Stank repeatedly blurts out an homage to his hometown that he calls “East Stank Louis,” though you still won’t know what it means to be from St. Louis, Illinois in the way Nelly made everyone aware of originality of St. Louis, Missouri (at first, at least). Therefore, “Block Boy Shit Vol. 1” doesn’t make the profound introduction all good music should strive for. Still, it remains good enough to keep Stank on your radar for this proper release, or another volume of this same series.