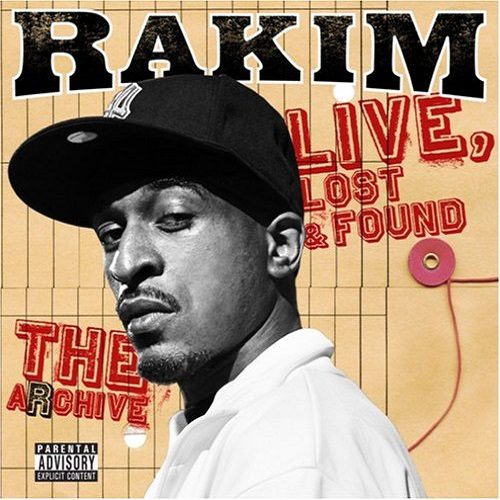 Rakim’s “The Archive: Live, Lost & Found” arrived on store shelves this week without the fanfare and acclaim one would expect for one of hip-hop’s most beloved icons. What little hype did exist came courtesy of a press release from Koch Records last week. When doing research for this review to provide background on how it came to be almost every search engine result was the same PR blurb or a carefully chosen excerpt from it. Hip-Hop heads who grew up in the era where every new Eric B. & Rakim release was treasured like the second coming are probably wondering what happened. Even the second generation “don’t call it a comeback” solo records like “The 18th Letter” and “The Master” had more buzz than this. Unfortunately even an all-time great like Rakim is bound to receive a lackluster reception when it’s been ALMOST NINE YEARS since he dropped a new album. Rumors and stories came and went during that long period of silence and everyone from Dr. Dre to DJ Premier was purported to be working on “the new Rakim masterpiece.” Once in a blue moon a new song would surface on a soundtrack – “I’ll Bust ‘Em, You Punish ‘Em” from “Celebrity Deathmatch” or “R.A.K.I.M.” on “8 Mile” but that was about it. Time went on and inevitably the anticipation that Rakim would return to save us from lyrical mediocrity slowly faded away.

SO REJOICE! CHEER! A NEW RAKIM ALBUM IS HERE… well sorta. The album’s title is the first clue that there’s not cause for a huge celebration. Out of twenty-one tracks only four songs are brand new. A little background on why they were “Lost” and how they were “Found” would have at least made for an interesting story to go along with the release, but oddly enough these don’t seem like “Archive” material. You don’t have to blow the dust off the Just Blaze produced lead single “It’s Nothing” because the track is musically contemporary to 2008’s sound and style. The rap doesn’t seem dated either – in fact Rakim directly addresses the stories about what happened during his long absence in the first verse.

“Aiyyo we stuck in a time of drought, nuttin to rhyme about
Ghetto or crime on the grind, pull an iron out
Industry cryin out, major labels buyin out
Who put the fire out? Real hip-hop is dyin out
Sound like the perfect time for Ra to set off the new beginnin
Let me finish where Nas left off
I went to L.A., to get with Dre, we tried to bridge the gap and
Take night mix it with day I guess it wasn’t meant to happen”

Two things are immediately evident – Rakim’s deep and dominant vocal tone has barely changed, and the long absence may if anything have improved the rhyme scheme over the lackluster lyrics lamented on “The Master” nine years ago. There’s not a whole lot of material to form a definitive opinion of Rakim’s standing in 2008 though. The Nick Wiz produced “Hip Hop” is a banger, “Love 4 Sale” is the most throwback of any of the new tracks and “Word on the Street” is best put in R’s own words: “Ra still killin ’em, blocks still feelin him/knots still peelin ’em, hot – still grillin ’em – real as them.” Unfortunately that’s it. Four brand new songs, take it or leave it. The excuse to take it is that they are packaged with seventeen tracks of Rakim performing live. It’s definitely a pleasure to hear a crowd rap along to Rakim’s songs, even newer material like “It’s Been a Long Time” that hasn’t had the chance to marinate as long in hip-hop’s consciousness. Unfortunately like many live rap concerts most of songs are abbreviated to just highlight a third to half of a track, such as Rakim classics like “Follow the Leader” and “Don’t Sweat the Technique.” I also don’t need the Fatman Scoop type hypeman yelling “It’s the God Rakim in the spot c’mon!” Dude, shut the fuck up. You’re not adding anything to the performance, you’re taking away from it. Despite these unavoidable problems it’s still great to hear the crowd react to being in Rakim’s presence to experience songs like “I Know You Got Soul” and “I Ain’t No Joke” live.

Lest anyone get the wrong impression from this review I’m more than happy to be reviewing a new Rakim album after such a long hiatus – as a matter of fact I’m ECSTATIC to see Rakim return in any form. Despite that the album doesn’t quite live up to the billing in some aspects. “Archive” implies they could have pulled together a collection of his soundtrack cuts that never formally appeared on any album, or at least some newer songs where his cameo stole the show like GangStarr’s “The Militia (Remix).” They didn’t do that. “Live” implies material taken from an-all time great Rakim performance, one which has been masterfully mic’d up where the sound is impeccable. With all due respect to the God, the concert recording they used here is not the best material possible. He relies too much on the crowd at times to finish his lines, and at others either the live recording wasn’t picking up his mic or (God forbid) he was mumbling because he forgot some of the words. All is forgiven since Rakim is a legend and any new material is better than none at all, but much as I’d like to hail this as the return of the R it feels like a teaser for something more that has yet to arrive. I hope whatever that is gets here before we wait another nine years.