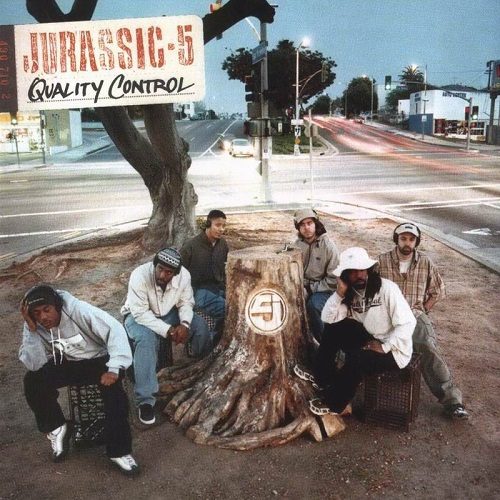 “If we don’t come with some new styles soon, we are all going to burn in hell”

This bold statement appeared on the back of the Jurassic EP in fine-print Public Enemy-style. Where PE chose to push the politic on the cover graphics, for J5 it’s all about new style. Their 1997 EP cover presented a modified Prism Records jacket in denim blue and old-school mustard flavor. The sound inside paid tribute to an even older-school fashion in lyrics, yet looked forward musically. They’ve caught criticisms and praise for the old-to-the-new, but the real issue is about the style. Old school style: skipping backwards past the Big Pimpin, over the Grimy Sewer, between the African Beads, beyond the shell-toes, and smack into the days of the Cold Crush. Just lyrics and a blacktop beat.

In 2000, Jurassic 5 take it back to the future with “Quality Control,” the long-awaited full-length debut. A crew of MC’s (Chali 2na, Zaakir, Marc 7, and Akil) are joined by the requisite DJs Cut Chemist and Nu-Mark. The effort by this Los Angeles group is to control not only the quality of their own music, but that of the hip-hop world.

The lyricists share the mic like eastern bloc communist parties, or like east coast block parties in ’82. Tightly arranged rhyme trading isn’t just a tribute to the old school, it’s an advancement for the whole school of hip-hop. Clans, posses, crews, and cliks should take note of how it’s done, as the J5 keeps with the formula of group choruses, and individual verses that give each MC a chance to shine. The vocal arrangements are amazing â€” there’s no doubt the group had to get dirty for all of this come off so clean. Chali 2na’s certainly the most distinctive with his strong voice holding down the lower end of the EQ. Just check out the way he brings “Jurass Finish First” inâ€”his voice melds with the beat before he transitions his verses with Mark 7. The subject matter throughout the album strays farther from a typical Bronx block party affair (fortunately), as the lyric crew delves into the realities of Hollywood life (“Lausd”), community activism (“Contribution”), and the y2k treatment of the basketball/mic-trading metaphor in “The Game.” The lyrical content isn’t new of course, but it’s the charisma and chemistry of the “concrete schoolyard” style that makes it all worth listening to.

DJ Nu-Mark and the Cut Chemist elevate this collection of songs above a typical old-school revival. It’s these two that “come with the new styles,” that provide the backdrop to the classic rhyme patterns to make us think twice about discounting the J5 as a tribute band. Though the musical elements are the same (fat bassline, fat drums, fat samples), Cut Chemist puts in work behind the boards to execute one of the finest produced hip-hop album since Prince Paul worked with De La Soul. The sound mix is on point, vivid samples galore, and the ambiguous cameos that make you wonder if they’re joking or not (Sean Lennon?! I hate Sean Lennon!!) Cut Chemist gets a chance to flex and show off his deep record collection with “Swing Set,” an incredible melange of swing dance music blended over hard beats. Nu-Mark crafts melodic rhythms that shine throughout, while not overpowering the mic-traders#151;in fact his sounds enhance the deliveries, as any great beat should. The production is near perfection, reminding me of Def Leppard’s glory days and anal precision in arrangement, sound, and studio finesse.

So when does the album get to the “sex, drugs, bitches and money?” The Jurassic 5 have skipped over that strain of hip-hop’s evolution and stuck to the basics of style. They’ve worked on elements of the music, wasting no effort on trends that have come and gone over the 25 years of the music’s history. J5 is like that kid with the clean gearâ€”the one with the pressed jeans and cuffs. White shell-toes, logo’ed socks that only he knows he’s wearing. He takes his style too seriously at times, and adjusts those cuffs around his laces every 10 steps. That’s J5. The attention to detail can be stifling, and you wish they’d screw up a chorus at least once, if not only for the element of surprise. The greater soul of the group lies in the Cut Chemist’s turntable creations, those incredibly complex DJ suites that bring the already organic mixture of sound to vivid life.

The beats that he and Nu-Mark lay down takes those old-school styles and makes it all fresh for the double-O, adding new styles for the next generation to learn from and, inevitably, bite. I don’t think this team of hip-hop purists have to worry about burning in their self-proclaimed hell, because “Quality Control” has proved that style is all relative; new is old, and, for Jurassic 5, old is new.