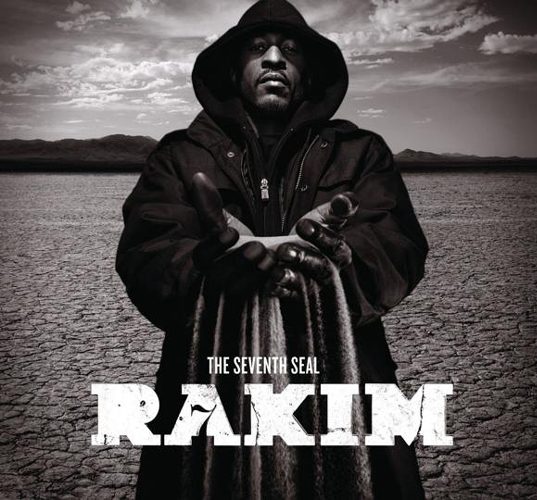 2008’s “The Archive: Live, Lost & Found” was the appetizer, and after keeping us at the table for a year, Rakim has returned with “The Seventh Seal” to give us the main course. Some things have changed in the interim and some haven’t. The God has his own website now and a new partnership with SMC that sees “The Seventh Seal” getting wide distribution both online and offline – in fact I found this album at Best Buy for $9.99. Those are positives, but unfortunately a lack of buzz about Rakim’s return is still a negative. In days of old a new Eric B. & Rakim album would be cause for euphoric celebration. In days not so old a Rakim solo album would be eagerly anticipated as the return of a rap legend. In days of recent new Rakim gets a “eh” reaction from jaded hip-hop heads who think he’s past his prime and no reaction at all from rap fans too young to have HEARD his prime. That’s a damn shame given the lead single “Walk These Streets” paired the R with Maino, a modern day rapper who is surprisingly well prepared to be a successor to Ra as a storyteller. Over a bumping Needlz beat R declares “money music,” the 18th letter sounds like he never took a day off:

“I perform in cities, hoods, and slums where the best seller is drugs
And money is the only thing that get love
They say don’t let it make you, but that’s how they rate you
And the more you got, the more they hate you (that’s okay too!)
Just don’t get in the way, cause at the end of the day
My agenda’s make sure I get them ends and get paid (uh-huh)
So I’m stackin grands ’til the math expand
It’s the man with the master plan
Since a bambino, cash made my path cross with evil
Uno dos cinco on a crowded corner rollin cee-lo
To chips and the chick in the casino pourin Cliquot
‘Cause now I make music for the C-notes
From New York to Puerto Rico, California to Rio
Hit the streets like the kilo but I’m legal
It’s swag like I walk with heat though with all my people
But it’s just me and my alter ego”

Rakim returns this time with a passion unseen in at least a decade, unapologetically declaring himself the salvation of hip-hop, in fact directly implying it with the samples Nick Wiz uses in the opening of “Holy Are You.” Bass, piano, static and precise drums melt together beautifully, Slyce provides additional scratches to dope effect, and R lays out his vision for hip-hop’s power and beauty. Follow the leader:

“For those who find it hard to believe (and it is)
Why they call me the God MC, the lyricist
Trace this style to the roots from Genesis
The world wonder, I’m still standin like pyramids
Designed so vivid, every brick it got a story to tell
My rhyme flow different like a hieroglyphic
Mind prolific, infinite, like mathematic
The first language now add that then add graphics
Go ‘head – here go let the blocks know it’s the gospel
Life’s new manual, so watch close
The new Michaelangelo or Pablo Picasso
Prepared to show you the cosmos in rhyme flows
Even my lyrical metaphysical
What this’ll do is help you get to your spiritual pinnacle
You find your mind too far fetched for it to fathom
I bring the darkness to the light and split the atom”

There’s little question Rakim burns this track with the heat of a nuclear blast, but this isn’t the only song he splits atoms on. R paired himself up with the right producers to bring the best out of his deep baritone flow, which results in a Rakim not trying to relive past glory but instead creating tracks just as relevant as any in his historic catalogue. Nottz funks it out for “Man Above” while Rakim breaks down how he left behind the street life to spit hot on mics. You can also hear a “Message in the Song” as Lofey gives Rakim a chance to swing a triple time lovely while Destiny Griffin features on the hook. This song is BEGGING for a Twista remix. The tempo and the beat of “You and I” featuring Samuel Christian prove that Ra can bust like it’s 1989 and still be ’09 hot. And if anybody doubts why Rakim still does what he does after being around long enough to retire a rap legend, one only needs to hear the Nick Wiz produced closer “Dedicated.” Wiz is probably the only person who could pair the God with a No Doubt track and get away with it, but in this context it makes perfect sense. As Rakim expresses his sadness at his mother’s passing, Gwen Stefani croons a well-timed lament about how the two used to be together, every day together, alwayyyyys:

“You was there from the beginning, all I had to do was survive
In a race against millions, win or lose then die
No rules apply, but you was my safe haven
At the end of the race waitin so I used your guide
I found heaven in you, you shared your life with me
Gave me insight way before the light hit me
It’s more than just a bond, cause we inseparable
Even when they cut the cord on the umbilical
Never more than a moment away
You fixed whatever was wrong and always know what to say
The same way to my sisters and brothers
Always honest, and show me what unconditional love is
The voice of a Goddess, and stars twinkle in your eyes
My heaven on Earth, or a angel in disguise
If you was here I’d just hug and kiss you
Cause to me the words can’t explain how much I miss you”

More than any Rakim album since “18th Letter,” the R on “The Seventh Seal” sounds like the rapper we fell in love with so long ago who fiended for microphones like cones of ice cream. The odd thing is that his baritone doesn’t seem quite as deep as it once did so long ago, and much as we might like him to recapture the timeless magic of those 1980’s classics that’s an era of divine inspiration even he will admit can’t be recreated. That doesn’t make the 2009 version of Rakim any less relevant, because he’s still solid with the flow and constructs rhymes that are both interesting and intense, making “The Seventh Seal” a worthy purchase and return for a man who was in the beginning, is now and ever shall be, God without end – Rakim. Amen.