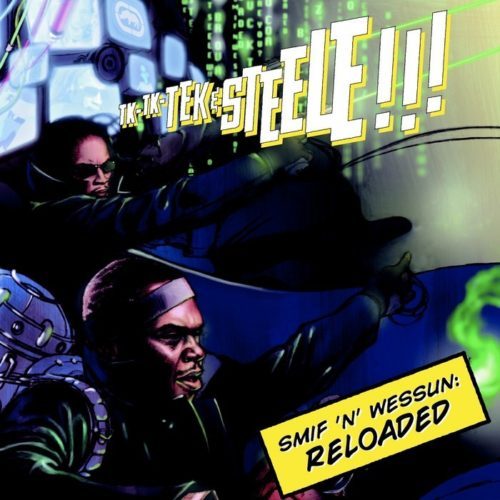 There’s no question of the affection underground rap heads have for Smif-N-Wessun. The 1995 release of “Dah Shinin'” is considered to be not only some of the best rap songs to ever come out of the Boot Camp collective but some of the best music ever produced by Da Beatminerz. Unfortunately lack of mainstream exposure and a legal squabble over the fact their group name mimicked famous gun manufacturer Smith & Wesson buried any chance that rappers Tek and Steele had of making it to the big time. Still the group persisted and kept releasing music under the name Cocoa Brovaz, including their famous “Super Brooklyn” song rapped to the actual music from the NES game Super Mario Bros, years before Lil’ Flip came along and rapped a song called “Game Over” to Pac-Man beats. That’s the way it’s gone for these Brooklynites – always a little bit ahead of their time but not recognized for it until someone else has ripped off their sound and style.

It’s not quite clear whether or not Tek and Steele actually got the rights to their group’s name back on this release. The comic book style front cover proclaims this album “Smif ‘N’ Wessun: Reloaded” but it’s listed as “S&W Presents: Tek & Steele ‘Reloaded'” on the side spine. Retailers seem to have flipped a coin deciding how they would stock it on their shelves and in online databases. Nevertheless the dozens of requests I received for this album review all singularly asked if we were covering “that new Smif-N-Wessun album” so that’s how I’ma call it. The group themselves took advantage of the long memory of rap fans, releasing “Still Shinin – The Mix” back in 2004. It was a solid effort that seemed to have the promise of more to come. In fact some of the songs found here are repeats from that underground mixtape, such as “Toolz of the Trade” and “We Came Up.” You can’t fault them for it because of the bootleg nature of the mixtape and the fact the songs were too good to just throw away.

Of course the heads want to know if Da Beatminerz are still down and producing that classic sound that made Tek and Steele’s gunclap lyrics so poignant. The answer is yes, no, and it doesn’t matter. There are excellent songs found on the album with Da Beatminerz signature sound like “U Undastand Me?” featuring Starang Wondah and Tony Touch and “A Hustler’s Prayer” as well the two aforementioned tracks that were also on the mixtape. The majority of the album though is handled by other producers who do just as good at capturing that dark, dirty and rugged Smif-N-Wessun sound that makes their shit so good. Dru Kevorkian’s guitar rock stylee on the opening title track is as M.O.P. as the music gets. Roc Raida’s “The Truth” has a subtle ominous undertone and the excellent turntablism tricks you’d expect. Coptic holds down three straight tracks on the album: “Warriorz Heart” featuring Dead Prez, the Kanye-esque styled “Here I Stand” and the haunting “City of Gods – Ciudad de Dios” featuring Buckshot. Khrysis chips in strong songs like “Gunn Rap” and even one shot producers like Moss do excellent work on “Get Back,” a song starring the entire Boot Camp collective. My personal favorite though is Coptic’s piano laced “PNC Boyz”:

“This rap I wrote for Earl
When you come home, we gon’ be on top of the world
But right now, this whole shit is outta control
Roach came home but Reem violated parole and so
I’m back on my grizzly fo’ sho’
With a pack and a mac driver’s side of the do’
My lifestyle got me stuck on the road
I’m outlaw in Bucktown we don’t fuck with the law”

That’s the way it goes with Tek and Steele raps. Most of the time their raps are a personal narrative on how they get through their hustle day to day, painting a visual portrait of the life of a Brooklynite. One could argue that it’s not that profound, but one could also argue there’s nothing wrong with just telling stories either. Either of these rappers alone might have a decent career as a soloist, but together they exhibit a natural chemistry the likes of Run and D.M.C., Q-Tip and Phife Dawg, or even Rakaa Iriscience and Evidence. Some things are just better together than apart, and “Reloaded” shows that although they may have lost some time over the last decade, they haven’t lost their knack for street-smart reality rap.