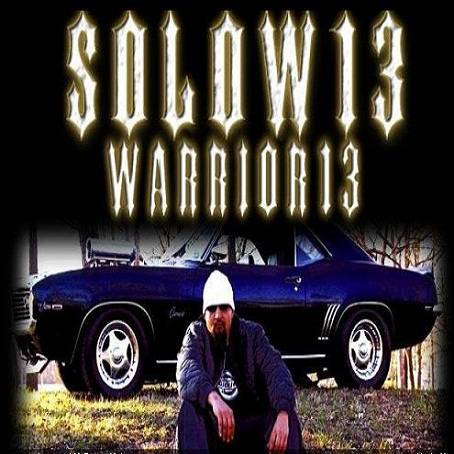 Some rappers’ stories are just too compelling not to tell; this is undoubtedly the case for Solow13. When he was an adolescent, his father shot and killed his mother, wounded his aunt and attempted to shoot him and his siblings while in a drunken rage. Life’s trials and tribulations can really be haunting. Perhaps this is the root of the obsession with the number 13, that I am unsure of, but the traditionally unlucky number is splattered all over the place (even creating a phonetic oxymoron in his rap name, though he later indicates they call him So-low because he is ‘so down that he’s low to the ground’). Strangely, most rappers would use this as an excuse to be hardcore a la 50 Cent, but the album “Warrior13” has an undercurrent of triumph over tragedy, as it is a totally clean disc, empty of explicit lyrics.

It is impressive that a man can take such large and difficult obstacles that life has thrown him and still build strong business relationships to the point of starting his own label with Lawfamilia, LLC, under Sen Dog’s (of Cypress Hill) parent company Latin Thug Records. Furthermore, the LP offers two impressive features with B-Real and Mellow Man Ace that will likely be the tracks the draw the most attention from a casual fan. More importantly though is the effort he has taken to be a better man by continuously studying the Bible and Hebrew law.

Solow opts to skip the filler as “Warrior13” jumps right into an up-tempo track featuring the aforementioned Mellow Man Ace entitled “Dickies With The Polo”. Immediately you will feel the influence of such Latin hip-hop pioneers, as he does have an old school flow more akin to Sen Dog; however, despite its infectious beat the song ultimately feels like a failed attempt to make a single as it is undeniably shallow by expressing his fashion statement, quite repetitively.

Luckily, the album gets much more introspective as the narrative reveals itself. The track “Solow” is a self-appreciating anthem that explains his performance name over ringing bell chimes. Meanwhile, “Remember Me” delves into a more sensitive side of Solow reminiscing about a love from the past over an acoustic production, easily creating the softest textures on the entire disc. On these tracks and others Solow raps bi-lingual, displaying his ability to switch between English, Spanish and sometimes even an odd assortment of the two (Spanglish). Unfortunately, the lyrical content therein often comes across as corny with lines like “even the Taliban want me, because they heard I was the bomb” and “she sees me as a gambler, she’s got to roll the dice.” Then there is the track “Father” which seems like a prime opportunity to expound on the saddening story of his birth father, but the song instead focuses on his spiritual father. The burdening tale of his Dad seems like a necessary evil if Solow wants to show vulnerability and to be true to the listener–something he never confronts.

While a clean disc is a refreshing idea, when Solow angrily flows like a Latin version of Eminem the music just seems to lose its edge. This is especially apparent on the cuts “Lord of War,” “Backstreets” and “Southern Cali Made” that are driven by dramatic epic-sounding production work mainly because Solow attempts to match the intensity of the provided beat.

The most notable track on “Warrior13” is “Whistle While U Work” featuring B-Real. This is purely because of the presence of the legendary Cypress Hill front man, who drops a typically nice verse, which only shows the disparity between him and the featured artist. Solow just does not vary his rhyme scheme enough to keep you interested for a long time and his rhymes are predictable aside from when he makes the switch to his native tongue. The chorus is interesting, as the sample is a strange compliment to the emcees’ verses as the old source material clumsily repeats “Whistle While U Work”. Still, nothing is nearly as bizarre as the track prior, “Make It Hop” that uses a synthetic robotic voice on the hook; think “Intergalactic” by the Beastie Boys simplified.

There are no real standouts on the album when you consider Solow’s one-dimensional approach. It is also frustrating when Solow repeats a bar to bridge into the hook, which draws a lot of unnecessary attention to unspectacular lines. The percussion-driven soundscape of “Gotta Hit Tha Streets” is nice and displays some of the best from Brian “Big Bass” Gardner who is the master engineer of the album (and has worked with Eminem, Snoop, Linkin Park, etc); however, we are ultimately presented with more of the same content.

It is quite possible to like the person, but not the performer. Clearly, Solow has some great and unique traits as a man. He is an inspirational story: overcoming tremendous odds to become an educated businessman, not to mention a spiritual person as a whole. Yet, these positive traits get lost in translation as he tries to show his perspective in the art form of hip-hop. There will surely be some interest in “Warrior13” as the Latino rap market is still slim; nevertheless, most rap fans will be better off popping a copy of “Black Sunday” into your deck.