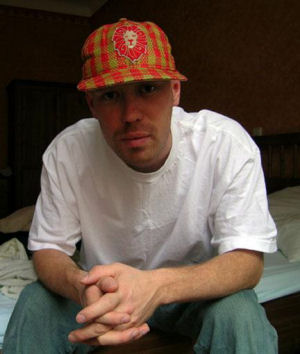 Living Legend member The Grouch, who earned his nickname during an argument with Sunspot Jones when Jones scoffed at one of his remarks, dubbing him The Grouch, is looking to take listeners on a journey with his latest effort, Show You The World. This week that journey made a stop at RapReviews as he sat down with us to discuss the album, his political views, and why you’ll never spot him eating at a terrible restaurant.

Adam Bernard: Start me off with your history; where you’re from, how you grew up and how you became a Living Legend.
The Grouch: I’m from Oakland, CA. I grew up there. I met up with a group calledMystik Journeymen back in ’95. They were already rolling with selling tapes out on the street. They would record four track tapes, dub em up on cassette decks in the house and go out and sell em on the street. They basically taught me that little game right there. I was already making a little music and back when everybody else was concentrating on making demos and trying to get signed we were just calling our demos albums and selling them. It just kinda all blossomed from there.

AB: You’ve titled your most recent effort, Show You the World. What kind of tour guide do you see yourself as?
TG: Aw man, I’ve been to a lot of places, I think, and I’ve found a lot of stuff on this planet that I enjoy a lot and I feel like I can, for one, show a huge amount of things to my daughter and then I feel like I’ve also learned a couple things that I can show everybody else in this world, too. I’m not saying that I know everything, but I have a perspective on a few things that I think people might enjoy taking a listen to.

“There’s no bullshit. It’s not acting or anything like that, it’s just exactly how I feel…”

AB: What makes your views unique?
TG: They’re my views so they’re unique in that way and I would say they’re very forward and stripped down and up front. There’s no bullshit. It’s not acting or anything like that, it’s just exactly how I feel as if I was having a conversation, as if I was giving an interview, and it’s just 100% real. That’s how I try to make the music and try to tell my stories, as I see them without anything sugar coated or anything that blocks the reality that I know.

AB: I want to talk about two of my favorite songs, the first being “Artsy,” which made me think you’ve spent some time in Brooklyn recently.
TG: In Brooklyn, huh? Well, I’m sure Brooklyn has a lot of characteristics of the same stuff that other cities have, but I actually haven’t spent too much time there. I know why you would say that, though. In California there are places in LA and the Bay area which also have some of those characteristics which probably make you say that about Brooklyn.

AB: OK, so who or what inspired this song?
TG: I know everywhere you go in the big city there’s an artsy scene and there’s like a little underground group of people, or they might not be underground, but there’s groups of people who feel like what they’re doing is the coolest thing in the world, or the most innovative thing, or the smartest thing and I just wanted to make a little fun of those people and you know I happen to probably be guilty of most of the stuff I’m talking about myself.

AB: That’s kind of the best part of it because we’re all guilty of at least one or two of those things.
TG: Right. Exactly.

“I think it’s kind of crazy what’s going on with all those big corporations that are just taking over the world.”

AB: The second song I’m going to bring up is “Mom and Pop Killer,” which has much less to do with the Menendez brothers than the title suggests. Is it safe to assume you avoid places like Wal-Mart and K-Mart like the plague?
TG: I try my best to avoid them. I know what’s right and sometimes I don’t always do what’s right. I don’t shop there as a general rule, but I can’t say that I haven’t bought anything from those places before. I think it’s kind of crazy what’s going on with all those big corporations that are just taking over the world.

AB: What are some of the other topics you were looking to address on the album?
TG: There are a couple of songs on there that deal with making mistakes, getting to the point of disaster, whether you’re ODing on drugs, or you got caught cheating, or you’ve done something where you realize you’ve fucked up and you need to retrace your steps back to what you know is better for you and for the people around you and kind of dealing with that like hey, I’m a man I make mistakes, but not just acknowledging that and continuing to live the way you lived before, but actually changing yourself. I have a couple of verses that deal with that. I also have a song dedicated to my wife on there because she was one of the people who showed me some of the mistakes I was making and helped me get on the right track. I also just wanted to write about women in a positive light because it doesn’t get done that often these days in Hip-Hip and that’s a shame as far as I’m concerned. Then I have another song on there called “Clones” and it talks about how dumb some people’s ideas are as far as materialism goes and again I’m guilty of that stuff, too, sometimes, so it’s not really meant to call people out and say you’re a bad person, but a lot of times when people get caught up in materialism they just need to take a look and check themselves real quick and realize that’s not the most important thing.

AB: It’s one thing to look good, it’s another thing to have $800 jeans.
TG: Yeah, but I try not to make anything where I’m saying well fuck you guys for being like that, and I’m better than you, because that’s not how I feel. I just felt like there’s been an overload of materialism on the radio and on TV as of recently. I think we saw a big surge of that back in the early 90’s and then there were a lot of people like De La Soul who came out and made some songs that were against materialism and it kind of got a little trendy for a while, but I don’t feel like anybody’s said anything about that in a while and it kinda got out of hand again as far as I’m concerned.

AB: Clearly you have some strong opinions on some important topics; would you mind if we dove into some political talk, or is that not your forte?
TG: We can do it. I don’t know too much about it. I don’t study it, but let’s see what you got.

AB: I was just wondering what your thoughts are on the way Obama and Hilary are going at each other?
TG: I don’t know, it almost seems like a Hip-Hop battle to me. They’ve gotten to the point of ridiculousness. I don’t know how they’re supposed to move past that, but it seems like they should. It’s like everybody’s stated their case, just let the people decide off the stuff that you’ve presented. That’s how I feel. I haven’t really paid too much attention recently. I followed it up until a certain point, when Texas was casting their votes. I think that was the last time I was really paying attention to it. To me it just seems like they’re dragging it out.

“I was into [Obama] and I donated some money and I subscribed to the email… and then after a while it was just too much for me to take.”

AB: Fifty states is a lot when you’re doing a primary in every single one of them.
TG: Right. Yeah, I’m pretty bored. I went to a couple of Obama rallies and I was into it and I donated some money and I subscribed to the email newsletters and stuff and then after a while it was just too much for me to take. But I think that both those candidates are a lot better than what we have now so I think the real thing is instead of them bickering back and forth, somehow or another they have to make sure that the other side doesn’t win after they’ve selected a Democratic candidate.

AB: If you were going to end up president what would be the first law you’d make?
TG: I don’t know about laws, but I would definitely try to stop that war that’s going on and I think it’s really fucked up that they’re trying to keep so many people out of our country. I think this country was built by people from other countries and I think that I would make it less strict with all the locking out of people at the borders that they’re trying to pull off right now. I’ve traveled this country a lot and the majority of this country is wide open space. It seems like they could do something. If people want to come in here they should be allowed to come in here. Growing up in California and seeing Mexico so close I saw how many Mexicans here run this whole fucking state for us, do all the dirty work for other people to eat food wherever the fuck they want on the block.

AB: Finally, what would people never know about you if their only point of reference was your music?
TG: I put a lot of it out there, to tell you the truth, but they might now know how much of a food fanatic I am. I like a lot of different foods and I like to cook and I like to eat foods from all over the world. That’s what I do a lot of in my spare time, so that’s a big part of my life that I don’t really write about in the music. I might become some sort of a food critic someday.