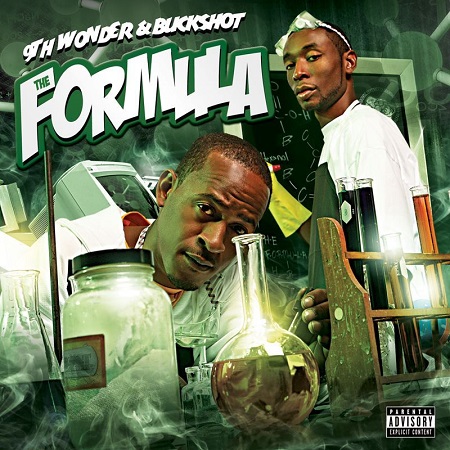 With “The Formula,” 9th Wonder and Buckshot are playing on both the science theme of their first album title (“Chemistry”) and the generic rap package parceled out to fans by the media â€“ two parts fake-ass pimp talk, two parts producer of the week, and prest-o change-o, another hit record for the kiddies. With tongues firmly planted in cheeks, Buck and 9th are adapting the commercial formula to their own purposes and offering up a mathematical equation for hip hop on a higher level.

While 2005’s “Chemistry” was a solid outing pairing Buckshot’s raw, witty lyricism with 9th’s soulful beats, the two seemed to be acting their given parts rather than crafting a natural sound together. On “The Formula,” though, the duo has come into its own, and the result is a cohesive album that flows seamlessly from top to bottom and feels completely unforced.

As always, 9th Wonder builds his beats from soul samples, particularly string arrangements and sped-up vocals, layering them all over each other in ear-pleasing combinations to get your head bobbing. “Be Cool!” develops around a choice vocal sample of “ooh-ooh’s,” with subtle guitar chords and other vocal stabs interspersed. The horns and strings of “Go All Out” have a sort of disco ball swing that glistens despite an uninspired drum track. Most of the beats here continue in this same vein, as 9th bends soul vocal samples to his will over straightforward drums, but a few tracks stand out even within this framework. The delicate piano octaves of “One for You (Big Lou)” sound almost as nostalgic as Buckshot’s lyrical ode to a fallen friend, and the ominous strings of “Just Display” create a darker mood that is a refreshing change of pace midway through the album. 9th is often criticized for refusing to switch up his drums, but that’s missing the point. Even if his drums aren’t the most varied in the world, the samples he flips and their melodic interplay more than make up for it.

For his part, Buckshot sounds downright gleeful compared to the grimy MC who penned “Buck Em Down.” “Chemistry” hinted at the kinder, gentler Buckshot on display here, but on “The Formula” Buck has developed into the role of elder statesman on the block, dispensing knowledge to the younguns and wooing beautiful ladies. “No Future” finds him sympathizing with the struggles of poverty but advising against a violent reaction.

“Okay peoples, how do ya do?
Better yet, how ya feel? Let’s start with you – true
Cuz I been waitin to get at you, perhaps you
got somethin else on your brain besides the last two
bills, for real, there’s room to build
Construct a new plan, get in tune with your skills cuz
Lately I see niggas is screwed up
It’s the nail in your coffin when you can’t move up
Do what? Lazy niggas done like the language
When you got nothin to hustle, why you fuckin with them strangers?
Ain’t it, kinda wild, this kinda child
Who grew up and didn’t smile, still see life foul, now
You feel like the world’s against you
Cuz you don’t make dollars but you don’t make sense, duke
Think about it, bring a logical point of view
When you bust them things, ain’t no way you not on no news
Your future!”

It’s a far cry from the BDI Emcee who bragged about “how I shot a nigga in the mug with the slug, leavin white chalk all on a pitch black rug,” but somehow it sounds informed rather than hypocritical.

When he’s not delving into deeper matters, Buckshot is spitting game to the ladies, as he does on “Here We Go,” where he steals a girl from her SUV-driving man by inviting her to “take a walk” with him. It might sound cheesy, but he is quite persuasive in his assertion that “you don’t need a Benz or a drop when we exercise your mind and body a few blocks.” It’s not all positivity, though, and Buckshot delves into trickier relationship territory on “Be Cool!” and “Just Display.” In addition to the romance theme, Buck also chronicles his rise to hip hop fame and directs some choice words at flash-in-the-pan rappers on the finale “Man Listen (Cause Ummm).”

9th Wonder and Buckshot work together so well here that “The Formula” is almost too cohesive. Each track picks up where the last one left off, which gives the album a smooth vibe but also makes it hard to pick a standout song among the bunch. And while Buckshot’s newly minted positive persona is mostly successful, his lyrics are slightly less sharp as a result, lacking that extra bite that made him so captivating in the past. These minor complaints aside, 9th and Buck have definitely upped the ante on their debut, so much so that a re-naming might be in order. While their first project sounded more “formulaic” in its occasionally awkward pairing of disparate elements, their follow-up is carried by a “chemistry” so organic that it seems effortless, which is reason enough to check this one out.