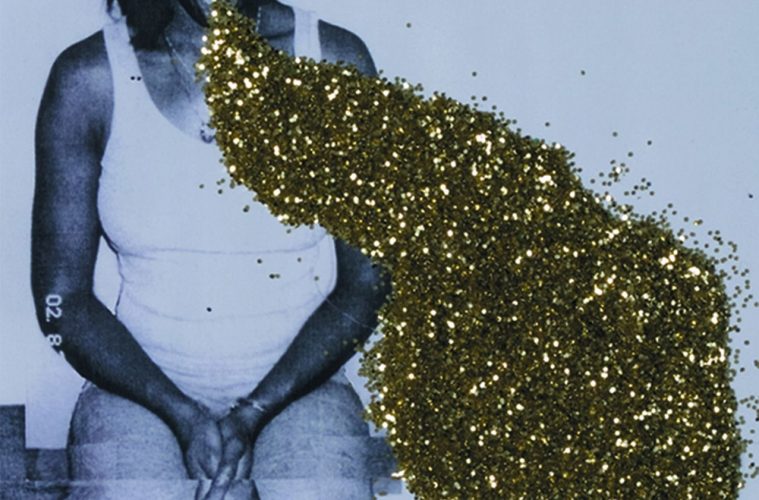 Multi-tasking. Contrary to popular opinion (well, female opinion anyway), men can actually multi-task. For example, right now I am listening to Santogold’s eponymous debut, writing the review of it and keeping an eye on the latest episode of “Heroes.” Alright, Heroes has gone a bit weird now (we in the UK lag behind and I’m currently viewing the second episode of Series 2) and I am rapidly losing interest. Women are famous for their ability to do a hundred different things at once – and perhaps that explains Santogold’s genre-hopping debut. She first came to my attention as the main warm-up act for the M.I.A. concert that I reviewed at the very end of last year – you may recall that I raved about Santogold’s performance and anointed her as one to watch in 2008 (in fact I think the exact phrasing was a simple “AMAZING”).

So here she is, in all her gold-spewing, hipster-wooing glory. You may already be aware of the obvious M.I.A. comparisons, the angry overly defensive “the obvious M.I.A. comparisons are lazy” brigade, her not particularly interesting back-story (music biz type, producer of failed R&B sensation Res, woo hoo). More interesting to me was RapReviews head honcho Flash spotting that her name is probably in reference to a “shady fly-by-night jewelry merchant in the 1980’s who spent $2m making a movie (featuring WWF wrestlers) called ‘Blood Circus’ which only 3 people ever spent money on watching. The jewelry business flopped and he was eventually arrested for mail fraud.” Now THAT is an interesting back-story. In fact, there is even a website clearly linked for this – www.santogold.com – which, I must admit, somewhat bewilders me.

Back to the album, an intoxicating brew of many different genres: hip hop, dub, rock, punk, reggae… In fact, she swaps style more than pretty much any artist I’ve ever heard – and she just about manages to pull it off. I say just because whilst songs such as the incredible first singles “L.E.S. Artistes” – a spirited and uplifting ode to the risk and potential sacrifices an artist must make – and the banging future funk beat of “Creator,” both resounding successes whilst being polar opposites, make this debut a fascinating blend, other tracks weaken the cause. Take “Anne,” for example, a strong song in itself, but completely out of sync with the rest of the album. Or the derivative Bristol trip hop remix to “You’ll Find A Way.” Other efforts such as “My Superman” and “Starstruck” are a touch more love/hate.

The highlights certainly outweigh the more confusing elements of the album, including the catchy original of “You’ll Find A Way,” fun Atari-type beat of “Unstoppable” and the wonderful “Lights Out.” But Santogold loses grip of the album at times – whilst flirting with different genres is fine, it helps to at least partially commit to one identifiable style. “Shove It” and “I’m A Lady” may co-exist on the same album but to all intents and purposes may as well be from different artists – there isn’t enough of a common thread. Whilst comparing her to M.I.A. isn’t particularly fair, it can be helpful – the latter knows how to globetrot with style, have banging beats, choruses and STILL own the track. In other words, she sounds like M.I.A. all the way through her album.

The same cannot be said of Santogold – whilst a fine album at times, with choruses most artists would give their right arm for, too often her debut sounds like an industry showcase of her skills set. Want an MOR feminist anthem? How about an inspirational rock anthem? Punk? Reggae? She can do it all. It just doesn’t make for the most coherent LP it could’ve been – the first half works well, but the second half loses too much focus. If that sounds harsh, it is – Santogold still has the makings of a brilliant artist, and has a live show (and dancers) to die for. Whilst much of music nowadays is the triumph of a good idea over any discernible talent, Santogold has the talent (and lyrical depth) to succeed, but an overflow of ideas pulling her in too many different directions. She has the raw passion and skill to succeed, but there is such a thing as trying too hard to please too many people â€“ even yourself.