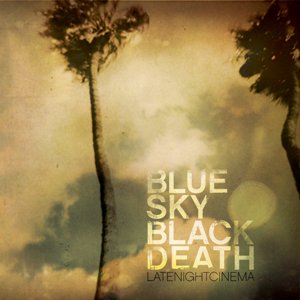 Blue Sky Black Death isn’t the most accessible hip-hop act out there. For one, their name isn’t one that is either catchy or very descriptive. Couple that with the fact that their first two projects on Babygrande featured Wu-Tang emcees as the stars and it’s very difficult to discern what the group is all about. While enlisting Wu emcees isn’t the worst way to get your name out there, I initially thought the duo was another Wu off shoot and put off peeping them. Turns out that I couldn’t be more wrong as Young God and Kingston are on the cutting edge of what rap music can be. On “Late Night Cinema” the crew finally gives us a solo album, with no emcees to detract from the music. The resulting project is a musical journey unlike any most hip-hop heads have ever experienced.

I’ll easily admit that describing music is the most difficult part of writing a review. You can only call a beat dark or energetic or haunting so many times before the term loses meaning. Even more difficult is the fact that the adjectives rarely have a universal meaning. An energetic, electronic beat may mean good dance music to some and experimental techno to others. I’ll do my best to give you an idea of what to expect when you listen to “Late Night Cinema,” but it is not a cop out when I tell you this is something you need to experience for yourself to fully grasp. Things kick off with “The Era When We Sang” and the six minute track tells a story through music. The track is at first a frenetic mixture of rapid piano keys, sparse horn samples, and bluesy strings. A soulful vocal sample then kicks in and brings order to the song before orchestral strings subdue the whole affair. Halfway through the track we get a complete breakdown where soft strings and pianos play off each other. The breakdown is then built back up, though the track never regains the energy it began with. If that sounded like something you’d expect to hear at a symphony you’d be on point as Blue Sky Black Death make orchestral hip-hop. It really is dope as it is both able to keep your attention for over six minutes and still sound like conventional hip-hop. An emcee could flow over the tracks, but an emcee is not necessary to enjoy the music.

The duo has mastered certain aspects of production that allows them to successful craft entertaining music. Crucial to making tracks that last six or seven minutes is the ability to keep things interesting and Young God and Kingston do this through the use of the breakdown. No matter how things start out, the track takes on a life of its own and chances are that by the end you’d swear you were listening to two different beats. The most impressive thing is that the transition is usually so smooth that you don’t notice. The other tool that the duo uses effectively is the use of vocals as instruments. Rap heads have become used to hearing a voice as nothing more than a method to deliver a message, but Blue Sky Blue Death employs the voice as another instrument used to set the tone of the track and at times to serve as the melody. On “Ghosts Among Men” both male and female voices go on and on about “cherry blossoms” and while I have no idea what the words themselves mean in relation to the track they do sound eerie and help the track maintain its mysterious and solemn mood.

It is not often that a purely instrumental hip-hop album leaves a lasting impression, but Blue Sky Black Death will definitely stay with you after just one listen. The album is appropriately titled as the music featured on “Late Night Cinema” truly tells a story. There’s really not a bad thing to say about the eleven tracks featured here. With this album, Blue Sky Black Death has pushed the limits of what hip-hop music can be. In other words, “Late Night Cinema” is essential listening to anyone who considers themselves a fan of hip-hop music.