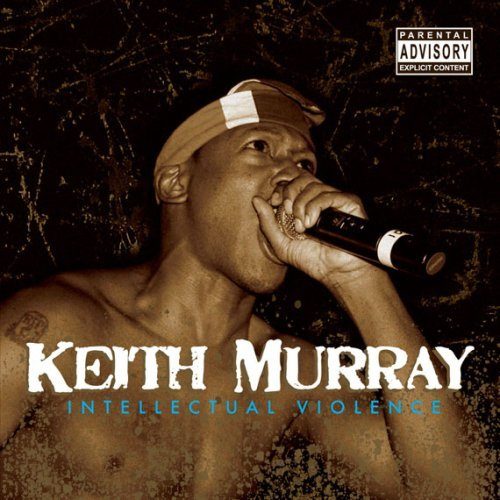 The days of Keith Murray taking four years to release a record are evidently gone: “Intellectual Violence” marks his second album in about eight months, coming on the heels of last year’s “Rap-Murr-Phobia.” Clearly, Keith still had something to say after “Rap-Murr-Phobia,” offering up fourteen tracks and six skits on his own Legion of Doom imprint. The disc features the track names and several black and white pictures of the MC, and that’s it: no production credits, and no information on the guest MCs, who include fellow Def Squad members Redman and Erick Sermon.

The album starts out with an intro featuring a film dialogue of a guy ranting psychotically, before going into the overblown, bombastic “Run For Ya Life.” The needles are all the way in the red, to the point where it sounds like it’s playing on blown speakers. He takes it down a few notches on “Talk Dat Shit,” which features a rolling beat over flutes and psychedelic guitars. Keith is in top form, rapping:

“My flow is in remote control that crawled the globe
You don’t feel me?
You ain’t got no soul
[…]
Fucking you up is too easy
I can’t do it
They’d lock me up, and hip hop needs me”

The next track, “U Ain’t No Gangsta,” criticizes phony gangsta rappers. It’s clear that his problem isn’t that they are glorifying a destructive lifestyle, but that they aren’t as hard as he is, and can’t back their talk up:

“He stay in VA but he’s afraid of the streets
He’s from GA but he’s sweet as a peach
Listen gangsta, you’ll be screaming
I’ll show your ass
Nah, that fake Al Capone shit, we don’t condone
I’ll turn this industry into a funeral home
You don’t like me? I don’t like you
Don’t open your mutherfucking mouth, and everything is cool
You niggas lying to try and make it through
Nah, that ain’t something that a gangsta do”

Despite the album’s title, Keith has a lot of physical violence that he wants to enact on phony gangstas, snitches, and pretty much anyone who talks smack to him. This leads to a conflicted and contradictory message throughout the disc: on one hand, Keith is remembering dead homies or describing life in the pen, and in the next track he’s spitting violence and mayhem. He never connects his own threats and gun talk with the deceased he is mourning or the time he spent in jail; that just gets blamed on snitches and other punks who need to be taken out. He also makes the world’s worst argument for the “Stop Snitching” campaign on “Rat Hunters” when he raps: “Let’s keep this thing respectable and kill each other on the streets/Instead, y’all niggas is quick to call the police.”

Keith has always yelled his raps, but on “Intellectual Violence” he comes close to sounding unhinged. Like Ghostface on “Big Doe Rehab,” Keith is amped up to 11 the entire album and trying not to lose it. It is exciting in small doses, but can wear on you over the course of fourteen tracks. The Ghostface comparison is especially relevant on “2 Niggaz,” which is the type of crime-story rap that Ghost has perfected. The beats can also get monotonous, offering up track after track of hard-hitting East Coast boom-bap. It is good in small doses, but doesn’t offer enough variety to hold a listener’s interest for the whole disc. Still, even when Keith misses, like on “What Is Trouble,” he merely sounds like a ton of other mediocre street rap that is out there.

When Keith nails it, like on the Redman and Eric Sermon assisted “Def Squad,” he creates the kind of hard-hitting, lyrical hip hop that New York is famous for. Tracks like “Got Our Own Thang” and “Anger” are aggressive bangers that hit you in the gut and don’t give you room to breathe. “Intellectual Violence” may not be a classic, but it is a solid disc, and manages to outweigh its shortcomings with some heavy beats and classic lyricism. If nothing else, Keith Murray deserves recognition managing to produce a record thirteen years into his career that sees him still developing his craft and sounding as hungry as he did on his debut.