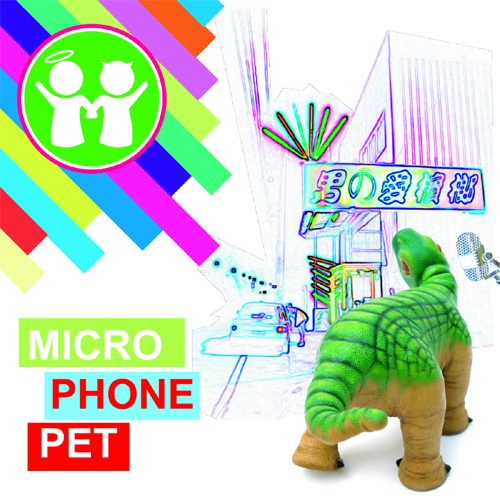 I’ve reviewed some odd albums in my day, but Mochipet’s “Microphonepet” may be one of the strangest I’ve ever heard. With that bit of foreshadowing out of the way let’s get down to some brass tracks facts about Mochipet. First of all his real name is David Wang. Second of all he was born in Taiwan, and he’s the son of a rocket scientist and a kindergarten teacher. If you’re already thinking that makes Mochipet something unusual in the hip-hop scene, it only gets odder from here. Mochipet’s bio claims without a single hint of wry irony that he became a musician at the age of 15 “when the urge of heavy metal overtook him.” This is not the Mobb Deep hip-hop form – “heavy metal for the black people” – this is the Guns ‘n Roses, Megadeth and Dokken form of heavy metal, with Mochipet shredding on a guitar. More power to him – he wouldn’t be the first child of the 80’s to grow long hair and throw on some makeup in order to be the next guitar star.

Somehow between then and now Mochipet became ingrained in the eclectic Left Coast musical scene of California, with the wide range of influences that includes from rock to hip-hop to electronica and more. With that said classifying “Microphonepet” as any of these album genres would be a HUGE mistake. That’s not to say there aren’t hip-hop titans aplenty contributing to Mochipet’s release. Opio from the Hieroglyphics and Dopestyle can both be heard on “We Put it Down.” Living Legends members Bicasso and E da Boss contribute to “Banana Split.” Member’s of Cali’s hip-hop band Crown City Rockers contribute to “Ride On,” and when former writer Tom Doggett described CCR as “rap music with [..] a softer edge” he hit the nail on the head for this song too.

There are other notable hip-hop cameos throughout this release including Casual on “Mr. Malase” and Myka 9 on “Hope Again,” but at this point it would be really useful to cut through any expectations you may have from these rappers appearing on “Microphonepet.” To even say “Microphone” deserves to be a significant part of this album’s title is wrong. Lyricism takes a backseat to the beats here, a backseat so far back it might as well be in your car’s trunk. Quite frankly if you turn up “Microphonepet” all you’re going to hear is your trunk rattling anyway, but this is not the big booming beats you’re used to. “Vnecks” is the ideal example, as every couple of seconds a beat explodes and then fades off into the distance, as a simplistic electronic melody is looped ad infinitum in the background until the song suddenly screeches to a halt at 3:09. It’s like being hunkered down into an audio bunker with enemy mortars and grenades going off nearby all around you in an all out assault. You might briefly think there’s a rhythm to it, but to even discern a melody whatsoever would be a supreme leap of faith – more than you’d want to take by standing straight up and hoping one of those mortars didn’t catch you in the chest to hear it.

While virtually no trace of heavy metal can be found on Mochipet’s album, only the rappers who provide the often indistinguishable lyrial contributions to “Microphonepet” make this album in any way hip-hop. If one had to try to put ANY description on the almost indescribable Mochipet, the best words that come to mind are jungle, electronic and most of all RAVE. Hard pounding beats like these mixed with sounds that repeat to the verge of mind-numbing frustration could only be properly experienced if totally high, completely drunk or both (please kids don’t do drugs). Once in a while you might hear some sort of culture soundclash on a track like “Paranoia Day,” where jungle music collides with a sitar, but just when you think you’ve got it the whole thing is drowned out in a pulsing wall of obnoxiousness. This is the kind of music you might hear playing in the background at a trendy art show, celebrity nightclub or as fashion models walk down a runway, and if that’s your bag more power to you. In my estimation though this is an album you should skip altogether as a rap fan. Even if you like the Hieros, Living Legends or Freestyle Fellowship and think you might appreciate their contributions to “Microphonepet,” trust me you won’t. Buy their albums instead.