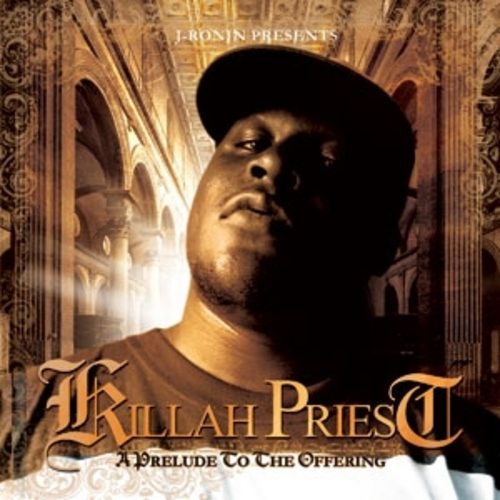 Killah Priest :: J-Ronin presents: A Prelude to The Offering

While Hezbollah rockets, Israeli tanks and bombers send Muslims and Jews alike to their all-too-familiar bomb shelters, veteran MC and longtime Wu affiliate Killah Priest sends word of the coming of his new album “The Offering.” Its herald “A Prelude to the Offering” couldn’t have landed on my desk at a more convenient time. What would someone like Killah Priest, who has made spiritualism and fierceness his trademarks, have to say about a conflict that is at the root of most religious uproar of the modern age?

“In Heavy Mental I showed you my art growth
My silver sword swinging in the calm snow
But in my imagination these falling snow flakes
Make the globe shake, and leave crates in the earth that rotate
This one is for Israel, revolutionary fist held
Both legs impaled by the devil’s dagger, I stagger
Let off a cliff and fell
Lost my grip, slipped in the pits of hell
My crown fell off down the hole
Grabbed by a million tortured souls
Burning flesh as they tore through my clothes
This archangel sent my body up
Lifeless but righteous, handed me a pair of cuffs
I right then, the sky cut with streaks of lightning
I ran into him like a bison, and turned off fighting forever
Good against evil, nigga, The Offering!”

These cryptic lyrics might be dealing with his own moral struggle, but could just as well be dealing with Israel’s hellish ordeal of defending a nation while violating the rights of others. This review shouldn’t turn into a political pamphlet, but it is wise to take these matters into account when listening to Killah Priest’s music. His words leave much room for interpretation, which gives an extra dimension to his special style of rhyming.

The above words are taken from “Uprising,” the only song on “A Prelude to the Offering” that is supposed to be an official song on the soon to be released album. The rest of this mix CD is filled with a combination of ‘exclusives,’ freestyles over a mixture of old Wu beats and underground floor fillers, and old verses of the Brooklyn resident. Frustrating, since “Uprising” is one of the more interesting compositions I heard Killah Priest do in years. Gospel voices and dramatic strings are the apt symphony for a clergy that sounds as ferocious as in his rookie years.

Comparing the old to the new is very easy indeed, because head mixer J-Ronin was so kind as to include some legendary verses off Wu-Tang head honcho GZA/Genius’ legendary “Liquid Swords,” where Killah Priest was featured on two songs, and it laid down the foundation for his reputation as a respected MC. Many heads will remember the mind-blowing, piercing sound of “4th Chamber” to which he dropped the following sermon:

“I judge wisely, as if nothing ever surprise me
Lounging, between two pillars of ivory
I’m lively, my dome piece, is like building stones in Greece
My poems are deep from ancient thrones I speak
I’m overwhelmed, as my mind roams the realm
My eye’s the vision, memory is the film
Others act sub-tile, but they fragile above clouds
They act wild and couldn’t budge a crowd
No matter how loud they get, though they growl and spit
Clutch they fists, and throw up signs like a Crip
And throw all types of fits
I leave em split, like ass cheeks and ragged pussy lips”

Still strong as ever, and even though I detest MC’s who regurgitate old hits, it is interesting to hear Priest’s evolution over the years. “A Prelude to the Offering” contains a lot more of these feature songs, which results in a cross-section of the career of this Brooklyn MC. Interesting, but not nearly as interesting as the group of guest MC’s that feature on this mix CD. Guest shots are as obligatory as Courtney Love showing up drunk at an award show, but the list of names on this ‘prelude’ show much promise for the upcoming album. The venomous revolutionary Immortal Technique sounds harsh as hell on “Stand Still,” Rawkus victim Shabaam Sahdeeq makes a marvellous comeback like Chuck Norris did in _Missing in Action_, and Black Market Militia cronies Hell Razah and Tragedy Khadafi kick it over a Cyrus the Great beat. The biggest surprise, however, is Nas showing up for duty on the gloomy “Crime Cardinals.” Though both MC’s are New York residents, the combination of a self-proclaimed priest and an artist that once bore the crown of thorns to publicize his newest single, is almost shocking. Priest has declared that Nas will also do a track on “The Offering,” and their ‘exclusive’ collaboration on this CD sounds like a match made in heaven. No pun intended.

Either you love him or hate him, but the clergy wielding a verbal scimitar always chose his own path in the ever-changing music industry. Just as proof: RR always indicates the record company that puts out a certain release, but this record can only be purchased at his myspace website. Rather mysterious, and it fits Killah Priest like a glove.

“A Prelude to the Offering” cannot be reviewed as a normal album, but it does showcase the potential of the upcoming record. After all these years, Killah Priest’s words are still as cryptic as they are vivid, and listeners have a lot of translating to do before they can reach the core of what this Brooklyn cat is saying. It was about time that this priest decided to go biblical on your asses again.