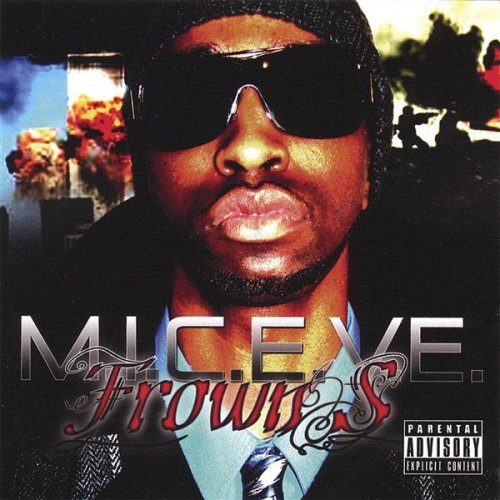 What can I tell you about M.I.C.E.V.E.’s “Frowns”? Maybe that on my copy the track order on the insert differs almost completely from that on the CD. Since that sometimes happens with the promos that we receive, that isn’t really noteworthy per se (unless the artist would try to sell exactly the same item as a full-fledged ‘album’). The reason I mention it is because I had no problem associating the anonymous songs with the titles at my disposition. To me that is a sign that M.I.C.E.V.E. (pronounced ‘Mic-Eve’) understands the elementary rules of writing rap songs. More than that, the Dayton, OH native comes up with compositions that manage to strike your interest. On “No Place Like Home” he paints a grim picture of “the hood, the only place besides prison that’s filled with niggas,” where kids are “out on the block gettin’ beat again / and some cat just got locked up for packin’ heat again” while yet another is “tryin’ to sell some scratched CD’s again.” Subject matter and execution are not exactly new, but the sarcastic title and the matter-of-fact account make this a song with a sufficent amount of penmanship put into.

The majority of the songs on “Frowns” portray M.I.C.E.V.E. as an artist who is eager to convey something meaningful. “We Make Muzic” details best his motivation as he lets you in on his not so glamorous hustle:

“Y’all want rhymes about how I’m livin’
Well, it’s different from BET’s _How I’m Livin’_
Ain’t no sports cars outside
or Lamborghini doors on my ride
Car’s in my mom’s name
3 months overdue on my student loans
I wanna quit, but who gon’ pay these stupid loans?
I dream of gettin’ a award for real
Grilled cheese and tomato soup, I’m poor for real
21, livin’ at home cause my savings account got $200 in it
And can’t keep a girl, man, cause once they find that out, man, I’m finished
No insurance, how I’m s’posed to pay this dinner?
(…)
If I wasn’t doin’ music, probably be in your purse
and runnin’ credit card scams cause I know how they work
But I don’t need that, I’m tryin’ to do this thing myself
Couldn’t afford a video, so I press record myself
I don’t mess with doctors, so I don’t know my health
I ain’t depressed, I just wanna kill myself
(…)
Sendin’ resumÃ©s to different companies and leadin’ to nothin’
And as far as music in the city, there’s damn near nothin’
They always said I’d be somethin’
So that’s why
(We make music)
Cause we tired of bein’ up in the hood and bein’ up to no good
(We make music)
Cause we got somethin’ to say, and what better way? Because
(We make music)
Cause we tired of violence and tired of bein’ silent
(We make music)
Cause we’re tried of bein’ told what we can’t do”

M.I.C.E.V.E. is a rapper that doesn’t always have to talk about himself to get the listener emotionally involved. On “Alright” he exposes the denial of those who pretend that everything is alright: “Little kids play outside (…) further up the street they sell haze outside / behind your house cops settin’ up a raid outside (…) fiends walkin’ the street all day all high / and y’all tell the kids everything’s alright.” “Pimps’ Commodity” traces the story of a woman who is confronted with the worst things in life. “Copland” is told from the perspective of corrupt cops. “Spirit of a Hustla” casts a light on the “hustler spirit” that both the legit businessman and the street pharmacist exhibit. “African American Idol” finally finds him using his time before the jury to bring charges against rappers who set a bad example for kids:

Sounds interesting? Well, it is. It would be more than just that if the realization didn’t have flaws that are hard to ignore. M.I.C.E.V.E. tries to inject sentiment into his delivery but doesn’t always hit the right note. So while you will be reminded of emphatic voices like Talib Kweli, Lupe Fiasco, or Kanye West, vocally M.I.C.’s urgency is not tempered by maturity. He possesses vocal charisma, but it is stifled by both his inexperience and the low-budget set-up. Like it or not, the status of a rapper as an authority figure you are actually willing to pay attention to for the duration of an entire album is largely based on his flow. Lyrics, vocal tone and everything else play important roles as well, but if you don’t feel a rapper’s confidence, it’s hard to in turn have confidence in him.

That’s why only full-grown MC’s with expert production back-up like Jay-Z can afford to reduce their rap to a whisper. With M.I.C.E.V.E., you can never be quite sure what it is that he tries. If anything, “Frowns” makes for an unusual listening experience because the gliding vocals come with similarly intangible beats. At times digging in the same easy listening section as MF DOOM, other times recalling Jay Dee’s most subdued moments, the production ranges from flashy to jazzy. “We Make Muzic” and “Spirit of a Hustla” contain nothing more than trancey keyboard layers and faint drums, while “Pimps’ Commodity” combines the same drum sounds with nothing but carefully edited female singing, resulting in one of the strongest showings production-wise. In its best moments, at the beginning and the end, “No Place Like Home” sounds like a jazz combo’s rehearsal across the street, while the rest of the track is a melodically bland combination of blaring somethings (horns, keys?). “Pressure (Come With Me)” is as agressive as “Frowns” gets, but knock it does not.

Ultimately, M.I.C.E.V.E.’s production is in tune with his mic persona. Realistic in that you can still hear the knobs being turned, dreamy in that it tries to rise into another sphere. Sonically he goes for something unusual, for which he deserves props. Unfortunately, “Frowns” is, no matter how you look at it, simply a demo that needs work. At this point it is hard to determine if there’s a strong suit M.I.C. should pursuit. Incongruent songs like “Art of Hatin'” and “Follow the Leader” suggest that he’d better stick to producin’ (to quote an oldie but goodie), but in either department he has yet to grow into his role.