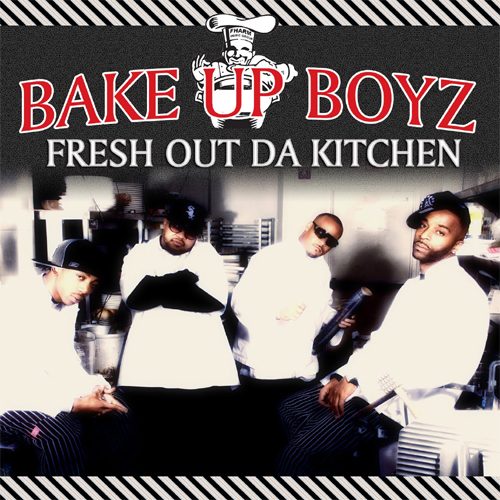 The Bake Up Boyz are here, in full effect. The four Michigan natives – Dirt, Bub, Loot 75 and Young Jino – release their first album proper, and are boosted by interesting guest appearances. Going for a distinctly “wherever the money is, we’ll follow that sound” sound, you will find a Dip Set-style sonic soundscape, combined with Dirty South posturings. Later on in the album lies more interesting fare, but of sensible amounts of interest is the actual structure of the group. Clearly, the manager Billion has been watching a gangster flick or hundred, and the four members have been assigned Mafioso style levels of influence (I’m not making this up):

– Dirt, known as the “Commander-in-Chief,” runs the “dynasty”
– Bub, the “Chief Counsel or Consigliore” values image above all else
– Loot 75 is known for his “gimmie-the-loot, stick ’em up” approach (isn’t that the wrong way around?)
– Young Jino is the “bambino or nephew to the empire.”

Right, so there is the management structure of La Familia. Now, if this runs true to the Godfather series, I can confidently predict that Dirt is a dead/overthrown, Bub will be stabbed in the back, Loot 75 will pick the wrong fight and get taught a lesson, and Young Jino… Well, if it turns out as bad as the last Godfather installment, then God help Young Jinoâ€™s film career. Seriously, though, this kind of nonsense is setting the group up to part within a year. You know how it works – one demands more respect, one gets greedy, one loves women too much, and the other wakes up with a horse’s head in his bed.

Enough of this Mafioso talk, what of the album? Well it is remarkably consistent. Consistently WHAT, though? Ah-ha, Reader, you are getting good at this game! Well, let the subject matter illuminate your path – drugs, bitches, drugs, money, drugs, how amazing they are, drugs and clothes/rims/chains. I didn’t realise that rappers still had such low aspirations, and when combined with the solid production, the first 70% of the album proves incredibly predictable. At least they vary rhyme patterns, and come up with some interesting flows every now and then. The songs are obviously threatening, boastful and uber-capitalist. Guests include a rather good Jim Jones on the single “Now I Can Do That,” and MC Breed on “Gucci’s On My Feet.”

Later on in the album, the more interesting material comes and rescues “Fresh Out Da Kitchen” from obscurity. A lovely collaboration with old school crooners The Dramatics provides a highlight of sorts with “One Of These Days” – I’m not sure how good it is, it is simply different to all that came before it. “Fly Spots” and the EXCELLENT “Court Session” provide more quality, and it is a shame that these three tracks are relegated to the latter parts of the album. After that, the album closes out with more of the same. So if you are a massive Dip Set fan, you will find much to associate with, even if it isn’t at that kind of standard just yet. But the Bake Up Boyz do have redeeming qualities, and hell, at least they can spit above average (an album full of songs like â€œCourt Sessionâ€ would make them superstars). It is just a shame that the majority of the LP is so contrived and typical of everything else around it.