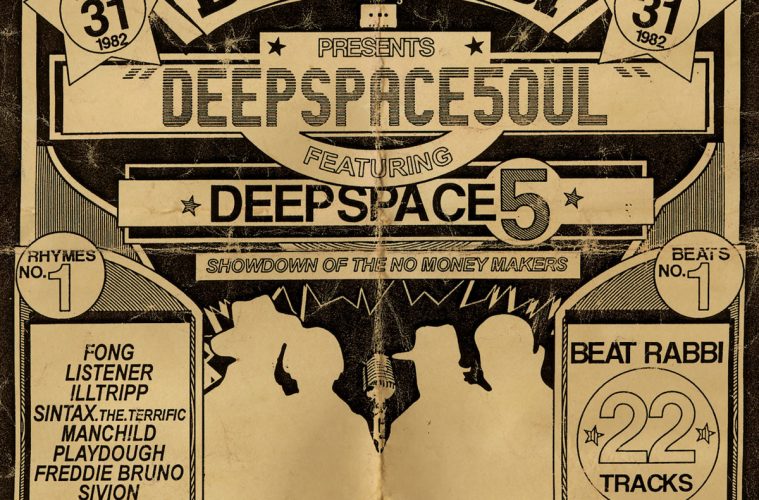 Beat Rabbi decides to fly solo this time around. Enlisting the help of DJ Dust in producing the 2005 DS5 album “Unique, Like Everyone Else,” this time around, Beat Rabbi takes on the daunting task of producing on his own for the crew on the latest album, “Deepspace5oul.” Although “Deepspace5oul” releases in 2008, it has been in the making since 2003. As Beat Rabbi envisioned an album paying homage to classic hip hop, funk, and jazz, the DS5 crew laid down the lyrics, after the fact, ending up with the finished product of “Deepspace5oul.” A twenty-two track collective effort that features all Deepspace 5 emcees including Manchild, Playdough, Sivion, Listener, and newcomer Illtrip, “Deepspace5oul” is exemplary of the talent that can arise when forces come together.

In 2000, Beat Rabbi had his major break in production as he was contacted by Manchild of DS5 and invited him to become a part of the DS5 crew. Immediately, Beat Rabbi was asked to help produce DS5’s debut album, “The Night We Called It A Day” and produced the popular track “Stick This in Your Ear.” Along with producing DS5 tracks, Beat Rabbi also worked with the group “Circumcised Minds” and produced their full-length album “The Real Battle.”

With Beat Rabbi’s name emblazoned on the album cover, I envisioned an album full of instrumentals with a few tracks from the DS5 emcees, but “Deepspace5oul” consists of the complete opposite. As many fans will have the same perception to what type of album this is, many will be surprised in the end. “Deepspace5oul” not only highlights Beat Rabbi’s production skills, but also introduces a wide array of lyricism from the DS5 crew as it shows off the talents from all of the respective emcees. Along with a few instrumentals, “Deepspace5oul” incorporates both tracks full of experienced lyricism from DS5 as a crew and shorter snippets from individual emcees. The union of adept skills in production and unmistakable wordplay results in an outstanding marriage between two different aspects of hip hop as reflected in “Deepspace5oul.”

As a Christian hip hop crew, DS5 ensures that their ideas of spirituality are existent in the not-so-spiritual realm of hip hop, especially in mainstream hip hop music. With sounds reminiscent to the premier front-runners of Christian hip hop, LA Symphony, Beat Rabbi and DS5 bring their “A” game to the scene. More so with Christian hip hop music, the spiritual message that is conveyed within the music is of the up most importance to both fans and the group. Beat Rabbi and DS5 take on the challenge to prove their message as it remains strong in tracks such as “Beautiful.” With its slow, ominous horn intro, the hard beat and bass eventually releases as some talented scratching is incorporated. Playdough and Sivion of DS5 play up this track with their lyricism while showing how life is more beautiful than what it seems as they say, “His strength and my weakness are beautiful.” A deep instrumental bass and echoing twang reverberate throughout “Side Note” while showing that “on a side note, never know with these journeys that we take.”

Straying away from the more traditional sounds heard in previous albums, “Dance Your Life Away” features emcee Listener on another one of Beat Rabbi’s interesting sounds as he incorporates a more experimental, electronic cadence. As more and more individuals lack the individuality and integrity of being their own person, Listener expands on this idea as he shows in a rather cynical, monotonous voice:

“Four words, “dance your life away”
Three words, “throwing life away”
You got to do what they tell you
Or they won’t be happy with you
So march to the music that they play in your head
Let’s be good little robots
Hope that we are accepted
Remember that beauty is only skin deep…”

Although the more spiritual audience would argue that the album lacks in originality in conveying a righteous message or the crew sounds forced into rapping about Christianity, an unbiased, less spiritual view from myself would say the complete opposite. There is nothing in the music that seems contrived or unreal as the mission to instill a positive view on life is clearly present and genuine.

Nonetheless, Beat Rabbi and DS5 keep the momentum going in “Deepspace5oul” as the shorter one and half minute tracks are incorporated in between longer tracks in order to add some variety to the album. As the pioneer to the DS5 crew, Manchild introduces himself on “The Founder” as he explains his professes his lyrical confidence on a simple organ beat. With an instrumental bass to summon “The Last Samurai,” Beat Rabbi ties in some sampling and scratching to accompany the lyricism about being like a last samurai with nothing to lose. Although releasing a relatively simple beat, “Life Is” drills the message as to what life is all about. Full of quick wit and realism, the track shows:

“Life is full of surprises
It’s beautiful and it’s good
But life is not easy though
Nobody ever said it would
Nothing in life is free
And most of the time well, you have to pay double
Life is an experience that you have to be there for
And makes you get out of your bubble
‘If’ is the middle word in ‘life’ and that’s always the big question
Hey, at least we’re trying
Take the ‘F’ out and you have a ‘lie’
But you have to decide who’s lying”

Although “Deepspace5oul” is an outstanding effort from both Beat Rabbi and DS5, I will have to be the one to address the one small detail that stands to be corrected. The track “Deepspace Seoul,” a wordplay on ‘soul’ and referring to the capital of Korea, features a clip from an Asian show with an individual singing like there’s no tomorrow as Beat Rabbi plays off of it with a new beat. One would believe this clip was from Korea but unfortunately, it is from Japan as reflected by the language spoken in the clip! What do you know? It just so happens that I’m Korean.

Many can argue that the type of beats and lyricism coming from Beat Rabbi and DS5 are a bit outdated for the present hip hop scene as it reflects a sound that was more popular in past years. On the contrary, Beat Rabbi’s 70’s funk, jazz inspired sound is timeless and irreplaceable in the timeline of hip hop. It is exactly the type of beat that I seem to be drawn to over and over again as it never gets old. It’s the sound that many have made popular including that of famed labels such as Quannum. Unlike what the hype says, this type of hip hop is far from dying and yes, it’s not the krunked, club hits you hear on the radio, but this is what makes it underground. “Deepspace5oul” is a celebrated collaboration between Beat Rabbi and DS5 that only emphasizes the capabilities of one another. An unexpected surprise of classic sounds and variety of lyricism is sure to engage any true underground hip hop fan.