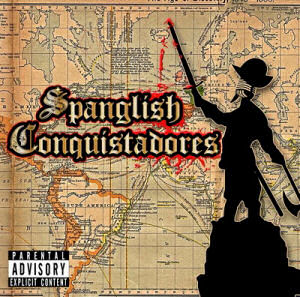 The Magnificent Ruffians have a fair claim to being “Spanglish Conquistadores” for two reasons – they constantly switch back and forth between two languages +and+ they have a producer named AGQ who hails FROM Spain. California to Spain? Now that’s what I call some international zone coasting. If that wasn’t enough to justify the title of their album, the Ruffians go out of their way to collaborate with famous hispanic hip-hop heads like Tony Touch and Thirstin Howl III. You can hear the latter on the half short but twice strong track “You Know Now”:

“See me in the city, Empire State
Building stair tall, no fire escapes
Classic status, sheepskin shell-toes
Throw a live party in the wildest hellhole
Juggle tracks, hustle fast, run it back
Flow slides and glides, sort of hovercraft
Hood legend, good lessons, questioned
He throws it all away, if he gets arrested
Dyin with pride, my balls and my word
Never hide online, or talk with a slur”

For my money though that’s far from the best track out of the 34 minutes of “Spanglish Conquistadores.” The ethereal reverberation of the title cut is a nice place to start, and the features from Blest One and Dkoldis are welcomed. The harmonizing and deadpan delivery of “Trust Issues” featuring Isayah Thomas works well too as does AGQ’s bare bones beat. To get the party going you’d want to throw on the bass heavy “Ooh Wee” featuring Virush, and if you want to go horrorcore like the Gravediggaz you can hit your corner bodega and blast “3 Round Burst” until everyone scatters.

The good news is that as free Bandcamp albums go, the Magnificent Ruffians can claim “above the average” status in terms of both their original concept and the quality of their music. The bad news is that with half the songs clocking in at under three minutes and two more just barely over it, a lot of “Spanglish Conquistadores” feels rushed. Songs like “Dynamite” show their true potential, when the full effort is put into a full length song, the rest of the time you’re left feeling gypped when they get a good vibe going and the track’s already over. There are also a few duds, which on a free album is never a good thing. Don’t bother with “Call It What It Is” or the overproduced “What I Do For You” – it does nothing for me. I’m looking forward to future efforts from the Ruffians though, because what’s here shows promise.